What Can We Learn From the Increase in Overdose Mortality in 2019? 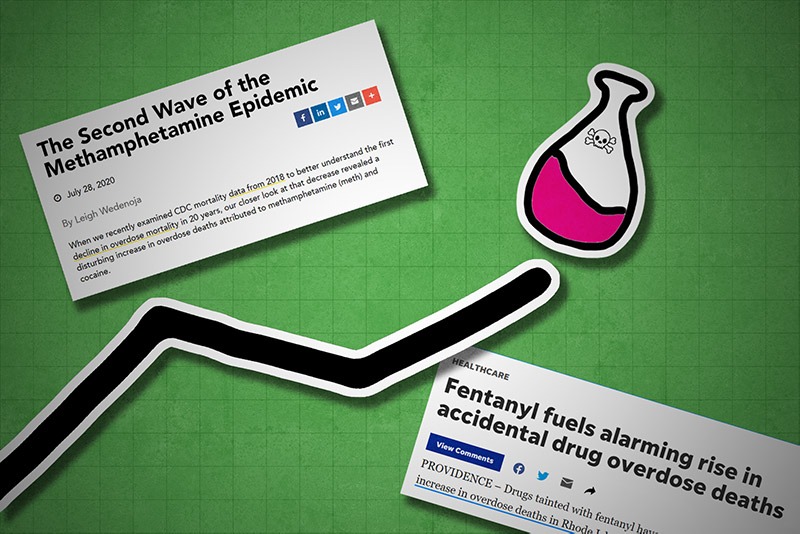 Overdose deaths have been steadily increasing for the last 20 years with the exception of a slight downturn in 2018. The number of deaths in 2018, however, was still higher than any other year in history except 2017 and now 2019. Beginning in 2016, the pace of overdose deaths accelerated primarily as a result of the substantial increase in overdose deaths that involve fentanyl or similar synthetic opioids. Overdoses involving fentanyl more than doubled between 2015 and 2016 from 9,580 to 19,413 and have continued to increase every year since hitting a new high of 36,359 in 2019.

Fentanyl is a synthetic opioid that was designed to treat extremely severe pain like that associated with advanced and terminal cancer. Because it is synthetic and strong (50 to 100 times more potent than morphine), extremely small amounts can replace much larger doses of traditional prescription opioids or heroin making it easier to traffic. For the same reason, it is particularly lethal and even trace amounts can result in overdose deaths. Fentanyl is also relatively cheap and may be mixed in with other drugs or used to manufacture counterfeit prescription opioid pills, which results in users ingesting more than they intended.

We have previously done deep dives into the dynamics of the increased mortality of methamphetamine and cocaine. In 2019 overdoses involving the two drugs remain at unprecedented peaks. Cocaine is most associated with the spread of solid or “crack” cocaine in the 1980s, and meth with the spread of the homemade version of the drug in the early 2000s that resulted in federal laws limiting sales of precursor chemicals including pseudoephedrine decongestant medication. The opioid epidemic’s dominance of the news for the past 10 years may make meth and cocaine seem like drug epidemics from the past but that is far from the truth. Overdose deaths associated with a stimulant (usually meth or cocaine) have increased four-fold over the past 10 years and the pace accelerated dramatically in 2016 with the introduction of fentanyl (an opioid). Before 2016 there were virtually no overdose deaths involving both a stimulant and fentanyl, but in 2019 there were 14,627. Fentanyl accounted for nearly half of stimulant related overdose deaths, while opioids of any type were involved in almost two thirds of stimulant related overdose deaths.

The uptick in these opioid & stimulant deaths is driven in part by the lethality of fentanyl itself—any use of a drug that has been adulterated with fentanyl is more dangerous than using that drug in a purer form—not only due to its physiological effects, but also because stimulant users may not be prepared to treat an opioid overdose. If administered quickly the drug naloxone can stop and reverse an opioid overdose to save someone’s life, but the drug has no effect on a stimulant overdose, so stimulant users may be less likely to carry naloxone.

Methamphetamine is a drug that is traditionally associated with the Southwest, including New Mexico, Arizona, and Nevada, and that is where meth involved mortality was still highest in 2019. Cocaine, in contrast, is dominant in the Northeast states and mortality is particularly high in Rhode Island, Delaware, Maryland, and Washington, DC. Both drugs have also begun to spread from their traditional locations. Cocaine in particular has spread through the Great Lakes states including Michigan and Ohio and down the East Coast to Florida. Meth has also migrated, moving up the West Coast through California and into the lower Midwest and Appalachia. West Virginia currently has the highest meth overdose mortality rate in the country at 22 deaths per 100,000 residents. Many of the states that have most recently seen increases in meth overdose mortality were also states hard hit by the opioid epidemic. Ohio stands out as a state with both a relatively high meth overdose mortality rate and cocaine overdose mortality rate.

The most important lesson from our 2019 overdose mortality dashboard is that the overdose epidemic remains pervasive in the US and is not limited to a single group, location, or drug. While much of the focus has been on the opioid crisis, deaths involving stimulants, especially stimulants adulterated with the synthetic opioid fentanyl, are on the rise. Fentanyl and similar synthetic opioids remain the primary drivers of our current historically high levels of overdose mortality. Reducing overdose mortality requires coordinated efforts by researchers, medical and public health professionals, and policy makers to treat addiction and promote harm reduction strategies. The COVID-19 pandemic has further complicated the public health response to the overdose epidemic and practitioners are developing new and creative strategies to confront this epidemic in a pandemic.