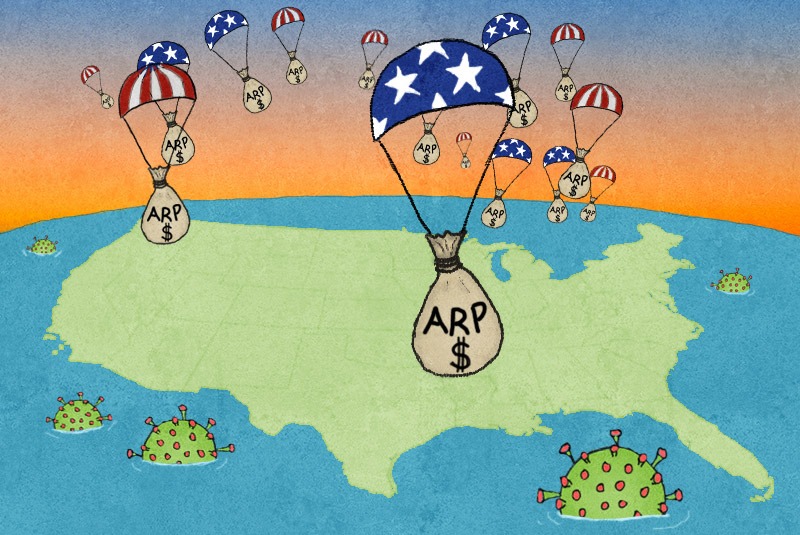 President Joe Biden signed the American Rescue Plan Act (ARP Act) into law on March 11, 2021. The $1.9 trillion spending package is designed to support the distribution of vaccines and accelerate the post-COVID-19 economic recovery. The ARP Act is the sixth federal relief package through which the federal government has allocated a total of $5.7 trillion to directly address the COVID-19 pandemic and related economic fallout. The ARP Act includes $350 billion in funding for state and local governments—the largest allocation to localities to date. This post provides an overview of the state and local aid included in the ARP Act and introduces a series of interactive visualizations that allow users to explore where the funding will be going.

State and Local Aid to Date

At the onset of the COVID-19 pandemic, state and municipal governments were facing uncertainty on two fronts. State and local health departments were charged with mounting the public health response, driving increased expenditures associated with establishing testing, contact tracing, treatment, and emergency services. Simultaneously there were concerns about significant revenue shortfalls. High levels of unemployment were expected to result in declines in income tax revenues and reduced economic activity drove down sales tax revenues.

Over the past year, governors and municipal leaders have issued multiple bipartisan calls for federal assistance. The CARES Act in late March 2020 allocated $150 billion to states, local governments, US territories, and tribal governments through the Coronavirus Relief Fund. The funding was limited to finance expenditures incurred in 2020 while addressing the public health emergency. Each state received a minimum of $1.25 billion and the amount was scaled up based on population. This funding could not be used to offset lost tax revenues or other non-health related expenses.

Why State and Local Recovery Matters

One of the important lessons learned from the Great Recession recovery is that state and local governments are critical drivers for their regional economies. Many states experienced a fiscal crisis following the Great Recession as they saw multi-year declines in income taxes. Localities which relied on property taxes saw revenues fall as property values collapsed.

State and local governments are fiscally constrained because they must balance budgets annually; declining revenues mean drops in local spending. The federal government, on the other hand, has the flexibility of deficit spending which gives it the power to address state and local budgetary shortfalls in an emergency. Between 2009 and 2012, 30 to 40 percent of state and local governments furloughed or laid off workers, eliminating 574,000 jobs. Cuts hit education, health, and social services—areas that traditionally see a surge in demand in economic crises. Capital investments made at the state and local level were curtailed in response to the fiscal shortfalls, resulting in less spending in the local economy and further declines in revenue and employment for local businesses. At the time, the federal fiscal response was $145 billion in the American Recovery and Reinvestment Act of 2009 (ARRA) to help states fill their budget gaps.

State and local governments cut back spending and investment, further depressing the economy, and government job losses extended the job market recovery. Economists have found these declines in government spending lengthened the recovery compared with other downturns.

Direct State and Local Relief in the ARP Act

The ARP Act designates $350 billion for the Coronavirus State and Local Fiscal Recovery Funds. The House Oversight committee has published preliminary estimates of this funding’s distribution. The funding will flow to states, counties, and individual municipalities, but the ARP Act explicitly prohibits the use of these funds for pensions or tax cuts. (This prohibition on tax cuts may, however, be challenged in court by states’ attorneys general as being unconstitutional.) Identified allowable usages have so far included, but are not limited to:

The visualization below shows funding to each of the states in the form of payments to the state, county, city and municipal governments. California, Texas, New York, and Florida are expected to receive the largest total amounts of state and local funding. Data is presented on a per capita basis to adjust for population. On average, the funds deliver $980 per resident, with Wyoming, Vermont, and Alaska projected to receive the most per resident.  States in the Northeast and upper Midwest are receiving higher than average per capita funding. States in the southeast and lower Midwest appear to be getting lower than average.

The CARES Act allocated $150 billion to state and local governments and the ARP Act allocated an additional $350 billion. The data visualization below shows how the relief was distributed to the states in the two packages. On average, states received 233 percent more funding from the APR Act as compared to the CARES Act. New York saw its funding triple, experiencing one of the highest increases of any state. These differences in distribution between the two relief packages are due to the fact that the CARES Act funding was allocated by population, while the ARP Act funding will be distributed based on the Community Development and Block Grant formula.

State and Local Funding in the CARES and ARP Acts

Based on House Oversight Committee estimates, the ARP Act’s Coronavirus Local Fiscal Recovery Funds will be distributed to 39 metro cities[1] in New York. New York City will receive $4.3 billion. The next largest allocations are to Buffalo ($350 million), Rochester ($207 million) and Syracuse ($126 million). Buffalo and Niagara Falls are expected to receive the largest per capita allocations.

The final visualization explores all of the funding delivered to the different governments within New York State counties. The preliminary ARP Act funding estimates break down recipients into three categories.

The ARP Act funding by county presents total funds received by municipalities within each of the counties.[2]

Beyond the $350 billion in direct funding to states and municipalities, the ARP Act allocated funds that could provide additional fiscal support to state and local governments and offset costs incurred in addressing COVID-19 treatment, vaccination efforts, and school reopening. These funds will be distributed by the Department of the Treasury or other relevant agencies to local school districts, public higher education institutions, public transit systems, and state and local health departments. Below are some of the provisions in the ARP that will also directly or indirect support state and local governments.

After a year of fiscal uncertainty, state and local governments are receiving resources that will allow them to close budget gaps that developed during the COVID-19 pandemic and restore services that were lost as a result of austerity measures. In addition, the funding will allow leaders at the state and municipal levels to roll out public health measures required to diagnose, treat, and prevent COVID-19 in their communities and vaccinate citizens. The ARP Act funding will also allow leaders to develop initiatives to stimulate economic recovery at the local level by targeting the individuals, businesses, and organizations most in need.

[1] According to the Department of Housing and Urban Development Community Development and Block Grant program: Metropolitan cities are principal cities of Metropolitan Areas (MAs) or other cities within MAs that have populations of at least 50,000.

[2] New York City Funding was distributed to the five counties based on share of the total city population.