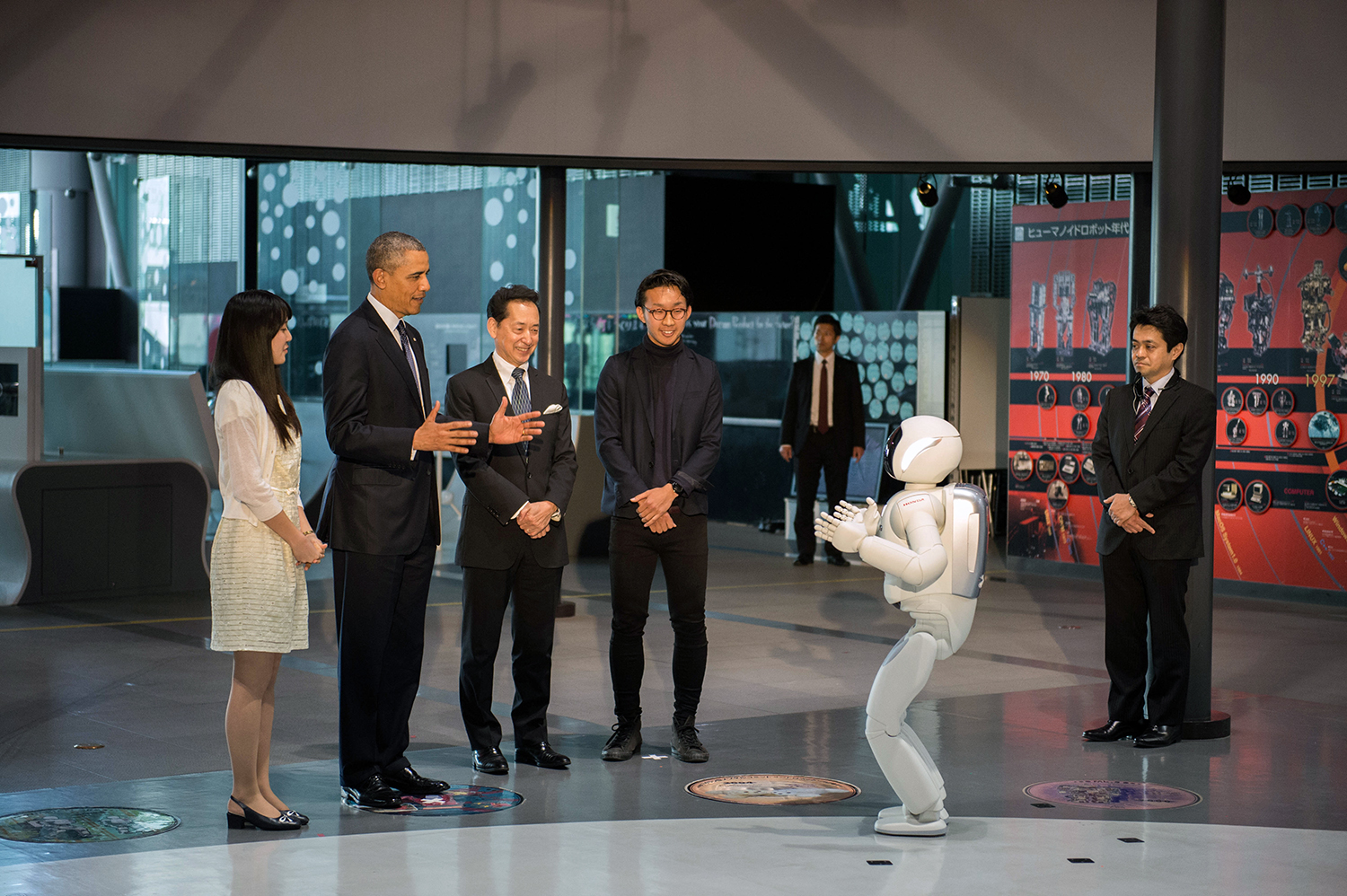 New technologies offer consumers more conveniences and productivity enhancements. These technologies also mean changes in the workplace. The nature of work is evolving and many jobs will be partially or fully automated in the coming decades. How will workers in New York State be affected by automation?

Technical advancements and cost reductions in the fields of data processing, computing power, information technology, and sensors have led to the integration of Artificial Intelligence (AI) into the workplace. AI has enabled the automation of tasks that require situational awareness and perception that, until recently, we thought only a human could provide. The result has been incremental changes in the way goods and services are produced and delivered.

Phones are used to place coffee and lunch orders instead of interacting with cashiers. Mobile banking apps provide alternatives to visiting a bank during business hours to cash checks. Self-service kiosks have replaced a portion of checkout lanes at most large retail stores. Big data and IT connectivity advancements have dramatically changed logistics operations, even allowing drivers and passengers to be connected in real time through ride sharing.

Automation through emerging AI technology has created tensions within our manufacturing workforce, yet at the same time it has the potential to open doors to significant economic growth and job opportunities. The question is how policymakers and industry can capitalize on the technology while not losing jobs overall. 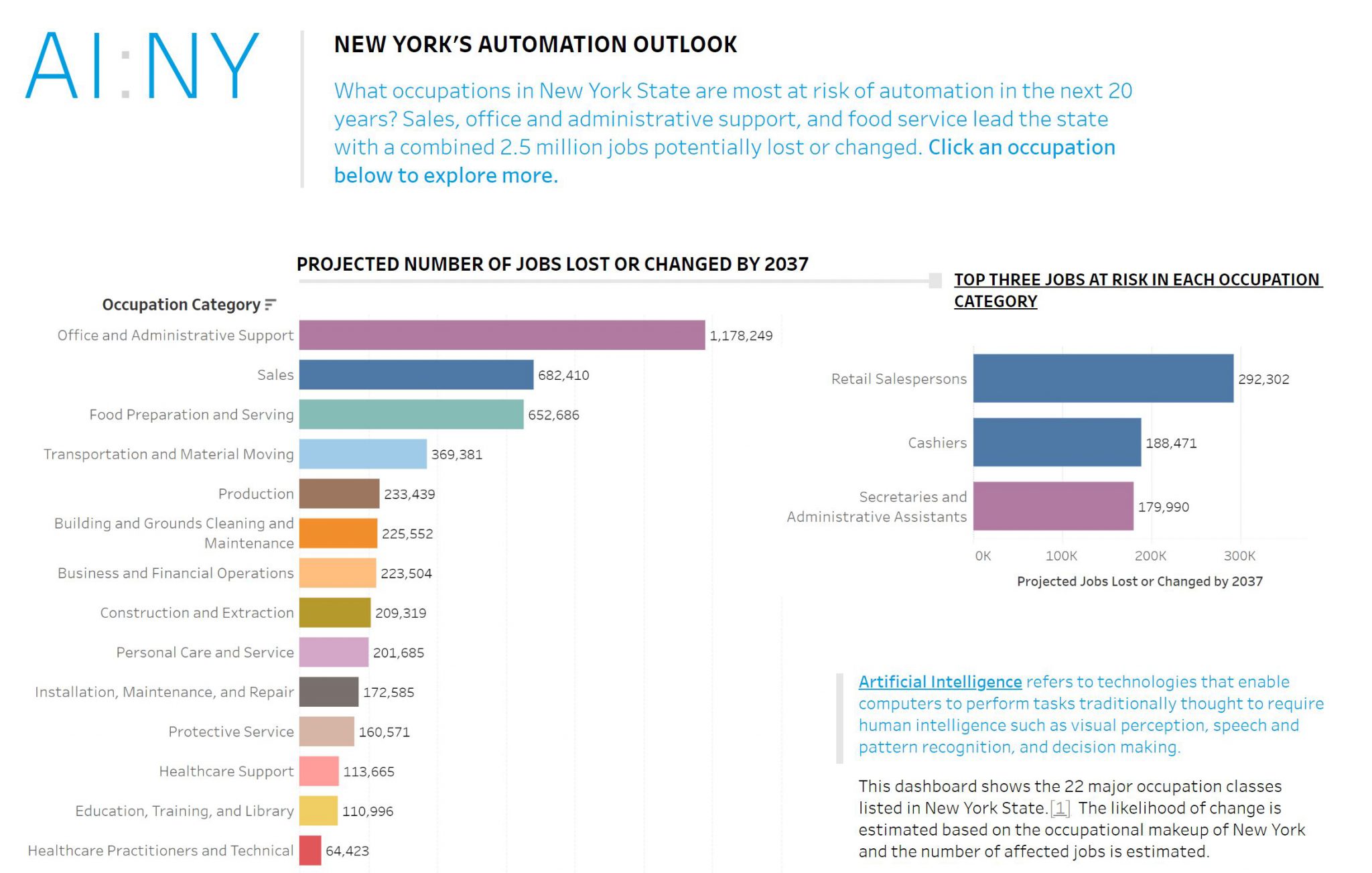 Automation through emerging AI technology has created tensions within our manufacturing workforce, yet at the same time it has the potential to open doors to significant economic growth and job opportunities. The question is how policymakers and industry can capitalize on the technology while not losing jobs overall.

When automation first found its way to assembly lines and replaced manufacturing workers, it was hard to imagine machines handling service jobs that required human traits such as social intelligence, perception, and creativity. But as productivity-enhancing, AI-enabled technologies continue to be introduced, we are at the frontier of a new wave of automation. Economists and policymakers are working to understand the scale and scope of this wave. By understanding what is coming, we can take steps now to prepare the workforce and adapt our innovation infrastructure to harness the power of AI and automation to improve productivity, create new industries, and generate economic growth.

This analysis is the first in a series of posts and discussions led by the Rockefeller Institute of Government to examine the economic, ethical, and social implications of AI on New York’s residents, workers, and employers. A better understanding of the coming AI technologies and their impacts on employment and quality of life will enable the development of programs, policies, and investment strategies that will assist federal, state, and local leaders in harnessing the full potential of AI.

The series begins with the quantification of AI’s impact on the New York labor force. The calculation is based on individual occupations. A recent paper by Frey and Osbourne estimated the probability of computerization of more than 700 jobs in the near future based on the tasks associated with the job and currently available technologies.[1] A high probability of computerization suggests technologies could eliminate or dramatically change the tasks associated with the job in the next twenty years. We combined these data with the occupational makeup of the New York State workforce in 2017 and found that 53 percent of jobs in New York could be automated with technology available today or anticipated in the near future, while 56 percent of workers across the US face threats from automation.[2]

The data below show the twenty-two major occupation classes listed in order of their share of the New York workforce. The likelihood of change is estimated based on the occupational makeup of New York and the number of affected jobs is estimated. As a point of comparison, we also present the growth trends for the occupations over the last decade. On average, the New York workforce grew by 7.2 percent. Occupations with a higher growth rate are expanding faster than average and those with a lower growth rate are contracting with their share of the workforce declining.

Occupations Most at Risk for Automation

The three largest occupation groups — office and administrative support, sales, and food prep and service — represent 35 percent of New York’s workforce. All three also have a high likelihood of automation, with more than 2.5 million jobs potentially impacted, accounting for over half of the future changes in the New York workforce.

Because of the larger share of highly skilled labor, many New Yorkers will be insulated from the impacts of automation in the near future.

Conventional wisdom holds that low-skills jobs will likely be automated first, and they are at the greatest risk of elimination. While AI may enhance their productivity and change the way they complete some of the work, more highly educated employees are unlikely to be replaced through automation. Professions such as doctors, lawyers, managers, and teachers have a low likelihood of automation. New York has a highly educated workforce with 5.8 million (43.4%) residents with a postsecondary degree. One-third of New York’s workforce is employed in occupations with a low likelihood of automation (30% or below) compared with 29 percent of the US workforce. Because of the larger share of highly skilled labor, many New Yorkers will be insulated from the impacts of automation in the near future. As automation and AI are adopted in all industries, it is unlikely New York will see a net loss in jobs. New technologies generate new employment opportunities just as others disappear. The challenge is that those who lose their jobs to automation do not necessarily have the skill set and education required for the new opportunities. While New York has a high number of well-educated workers well positioned to take these new jobs, 14.1 percent of New York residents over the age of twenty-five do not have a high school degree and are likely working in occupations at high risk of displacement.

The Rockefeller Institute is committed to leading this discussion through quantitative and qualitative research on the future of automation. Policymakers can only address a problem if they truly understand its nature. Future discussions, blog posts, and publications will engage with industry leaders, technologists, employers, educators, and policymakers in New York State. The Rockefeller Institute of Government is co-hosting an AI Policy Forum on November 28, 2018, with the SUNY Office of Research & Economic Development. The forum will be a comprehensive discussion of artificial intelligence’s current and future effects on labor, the economy, ethics, and society. Our goal is to understand the nature of the impacts automation and AI will have on New York and how we can effectively harness our resources to enhance productivity and foster the growth made possible by the dawn of AI in New York

[1] Carl Benedict Frey and Michael A. Osborne, “The future of employment: How susceptible are jobs to computerization?,” Technological Forecasting & Social Change 114, C (2017): 254-80.

[2] A report from the Center for Urban Future found that 41.2 percent of all New York job tasks could be performed by machines in the coming decade. See Matt Chaban, State of Work: The Coming Impact of Automation on New York (New York: Center for an Urban Future, June 2018), https://nycfuture.org/research/state-of-work-automation-impact-on-new-york-state