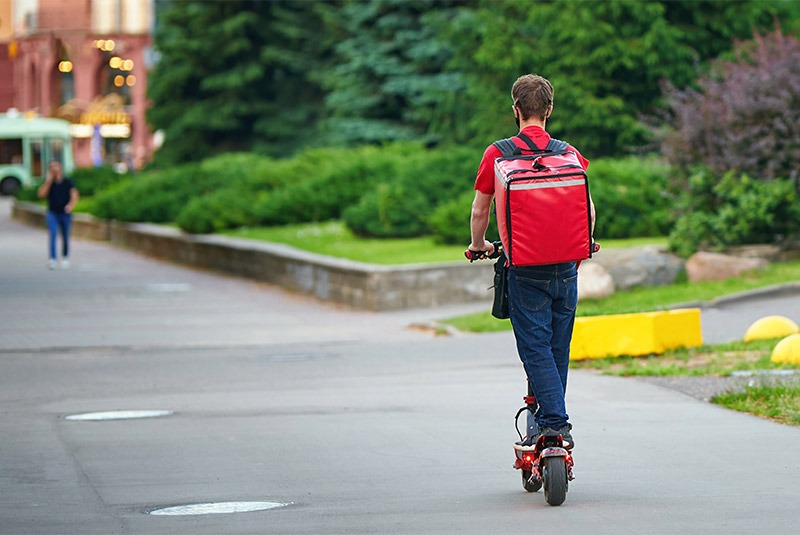 This is part three of a series on “Legislating the Gig Economy.” Part One of this series addressed the legislative approach to protecting gig workers’ rights in California and other states. Part Two looks at efforts to protect gig companies. See the series landing page here.

The number of gig workers in America has been growing in recent years, but the COVID-19 pandemic has accelerated that trend. Estimates of this expanding part of the economy have varied, but one pre-pandemic measure classified around 41 million Americans as gig workers (defined as independent contractors or other non-traditional forms of employment).

But when the CARES Act passed in the early weeks of the pandemic and expanded unemployment insurance benefits to this class of workers, it placed a spotlight on just how much we don’t know about the size of the gig economy. The federal policy focus at the time was largely driven by a concern that workers in app-enabled employment and dependent upon the service sector were not able to work because of government-mandated lockdowns to control the spread of the virus. But the extension of unemployment also included other non-traditional workers such as self-employed individuals and independent contractors like farm laborers, musicians, or entertainment workers. Wage workers who had to quit their jobs because of pandemic lockdowns or quarantine were also eligible. By April of 2020, state unemployment agencies, already under a deluge of unemployment claims, were also required to process claims for a group of workers that their systems weren’t designed to handle.

One year later, a key question is whether some or all of this increasingly significant portion of the workforce should permanently be included in the social safety net. This piece will explore new state-by-state data on gig worker unemployment, highlight the challenges states faced in executing the program, and consider what policymakers may do going forward.

The Impact of Pandemic Unemployment Assistance

States began processing pandemic unemployment assistance (PUA) claims for non-traditional workers in April. Ultimately, PUA claims in 2020 represented 17.5 percent of the US labor force, according to the National Association of State Workforce Agencies’ (NASWA) 2021 State of the Workforce Report. The report notes that the unemployment eligibility expansion was a significant driver of state agencies’ increased workloads: of the 1 billion total individual weekly unemployment claims in 2020, nearly half—more than 419 million—were by PUA claimants. Calling it a “claims tsunami,” the NASWA report says the unemployment insurance initial and continued claim filings is at a level “never seen in the 85-year history of the UI program.”

Payment amounts for PUA tended to run smaller than regular unemployment claims. As a share of total claims paid, most states paid somewhere between seven percent and 12 percent of claim dollars to PUA claimants. By comparison, regular unemployment claim payments in most states accounted for 22 percent to 34 percent of all benefits paid out. This is likely due in part to the fact that the app-based workforce tends to earn a lower income compared with their fully-employed counterparts. But that wasn’t true everywhere. In California, Arizona, Maryland, Pennsylvania, Vermont and Virginia, $1 out of every $5 in total benefits paid out went to a PUA claimant. In fact, Arizona, Maryland and Virginia paid out more money in PUA claims than they did for traditional unemployment insurance. This could be due to a combination of more claims by higher-earning contractors and other self-employed individuals and faster PUA processing, resulting in more money out the door in 2020.

The broader delays in processing claims have had real consequences. A report by the nonpartisan Century Foundation noted that by August 2020, only a little over half of all unemployment claims nationally had been paid. Additional research noted that among families whose incomes have been cut because of the pandemic, 72 percent said they had trouble meeting basic household expenses and 31 percent reported not having enough money to pay for food. “Put simply,” the authors wrote, “a retroactive check in February can’t be used to put food on the table in January.”

These realities reflect just how inundated state unemployment offices were—and still are. For example, Vermont Division Director for Unemployment Insurance Cameron Wood said the state in late March 2021 was still processing about 35,000 claims per week—nearly six times the pre-pandemic average, even in their busiest season. “It’s been a challenging year,” he said. “I think our department could never have imagined we would have to meet all the challenges we have.”

The Problem of Verifying Income

One of the top challenges for state unemployment agencies processing gig worker claims was in verifying income. Systems were designed to make sense of wage employee income that has been reported by employers to the government via a W-2. But the reporting form used for many receiving PUA—those whose income comes through third party network transactions and payment card transactions—is a 1099-K. This form includes different types of incomes, which would have to be manually sorted out by a claims processor. What’s more, the forms aren’t available for most gig workers. The IRS only requires platform companies to send a 1099 to contractors and the IRS if that contractor earns more than $20,000 and exceeds 200 transactions. So, some 80 percent of gig economy workers who earn less than $20,000 in a year from a company don’t even receive a 1099.

“Gig workers receive multiple payments from multiple employers and the system wasn’t designed to fit income like that. It’s been a tremendous headache for workers and for leaders in government.”

That means the typical rideshare driver who earned less than $20,000 on Uber and Lyft each last year would likely not have tax documentation from either company to quickly prove it, said Wendy Walker, Solution Principal at Sovos, a global tax compliance platform based in Massachusetts. “So then it goes into a manual [substantiation] process as opposed to a wage worker,” she said. “And when you have millions of these happening in some of these states, you can imagine how long the wait was.”

In order to prove their income, workers had to pull from any source they could. “A lot of workers have resorted to submitting bank statements, or even phone screenshots of payments into their account,” said Adrian Haro, CEO of the Workers Lab which helped fund a separate emergency cash program for gig workers. “Gig workers receive multiple payments from multiple employers and the system wasn’t designed to fit income like that. It’s been a tremendous headache for workers and for leaders in government.”

One of the reasons Vermont processed a larger share of PUA claims is likely because its different approach to income verification helped reduce backlog. The priority, said Director Wood, was expediting payments to individuals and the state took several steps to eliminate potential log jams. In many states, claims went through a multi-step process where the initial payments were based on the original claim, but could be clawed back if the claimant could not submit income verification documentation within a specific time frame. Instead, Vermont paid out the guaranteed minimum—$190 per week—and gave claimants 21 days to submit any income documentation that would garner them a higher payment. What’s more, that documentation usually wasn’t subject to the kind of manual verification that Walker said led to slow processing in so many states.

“From our perspective, as long as the individual is self-attesting, we’ll accept that as validation of what they’ve reported,” said Wood. “We go back and review a certain percentage of claims. But we’re not taking the approach of looking at every single claimant because we don’t have the capacity, we don’t have the resources and neither we nor the claimant have the time.”

Measuring the Gig Economy Will Get Easier

The deluge of PUA claims made it clear that extending the unemployment insurance benefit to non-traditional workers significantly impacted a large portion of the workforce. It also highlighted the fact that policymakers need better data on the gig economy, something that economists have been saying for some time. “That first stimulus bill,” said Walker, “it became apparent very quickly that the government had not appropriated enough for unemployment insurance because it’s been unclear how many workers there actually are.”

…of the 1 billion total individual weekly unemployment claims in 2020, nearly half—more than 419 million—were by PUA claimants.

Some states have responded to this information gap by requiring gig-economy workers to start reporting their earnings through a state 1099-K form. Five states (Florida, Illinois, Kansas, Maryland and Oregon) added the requirement for gig workers in 2020, pushing the total number to 12 states plus Washington, DC. Most states have a lower 1099 threshold than the IRS, which will make it easier for them to track the incomes of non-traditional workers going forward.

More recently, the American Rescue Plan passed in March 2021 did the same thing at the federal level: it dramatically lowered the 1099-K reporting threshold to just $600 annually and eliminated the transaction minimum. The new threshold goes into effect for tax year 2022 and it means that many contractors with gig economy companies like Uber, DoorDash, and Lyft will be getting a 1099 form when they previously wouldn’t have. It’s expected to provide a much more accurate picture of the nation’s gig economy.

A Safety Net for Gig Workers?

The sheer magnitude of platform based workers and other workers who have used the PUA program has also sparked a conversation about whether the unemployment insurance expansion should be made permanent. Congress has now extended pandemic unemployment assistance through September 6, which gives policymakers more time to track its use.

Haro, whose Workers Lab has now partnered with an app called Steady that helps gig workers automatically track their income, supports a permanent expansion of the program and is talking to more than a dozen states about how the app could drastically speed up income tracking and verification. Noting that gig work tends to be dominated by people of color, he argues that expansion “creates an opportunity to make this social program more inclusive, more equitable, and more accessible to a group of workers who have historically been shut out of it.”

For policymakers, however, two key questions must be tackled: defining what group of workers benefits should potentially be extended to, and how to pay for it. Traditional unemployment insurance is funded by a tax on employers. The federal government has been covering the cost of unemployment for gig workers in the pandemic, but a state that decided to make its own expansion would have to find a way to fund it.

…two key questions must be tackled: defining what group of workers benefits should potentially be extended to, and how to pay for it.

“I’ve had conversations with legislators who’ve asked that very question—does it make sense to have provisions for the state to protect the typical PUA claimant who is not covered by regular [unemployment insurance]?” said Wood. “And my first comment… to that legislative committee is that we wouldn’t have funds as a state to do that right now.” That is, any solution would likely involve changing employment law, which currently divides workers into independent contractors or traditional employees, because gig economy workers tend to be a blend of both categories. Some states have already been talking about whether to create a new classification of workers that provides some safety net benefits. But classifying these workers has been riddled with complications and controversy. (See Part I and Part II of this series.) Companies whose business models rely on ‘no-strings-attached’ contract work are often loath to start paying more to cover benefits. While the pandemic has certainly added pressure by demonstrating the vulnerability of app-based workers, it doesn’t make defining what has been a gray area of employment law any easier.

“I think it is going to be interesting to see where these conversations go from here,” said Wood. “We’re still in COVID response mode… For us right now, we’re still trying to just make sure we’re getting through this week.”