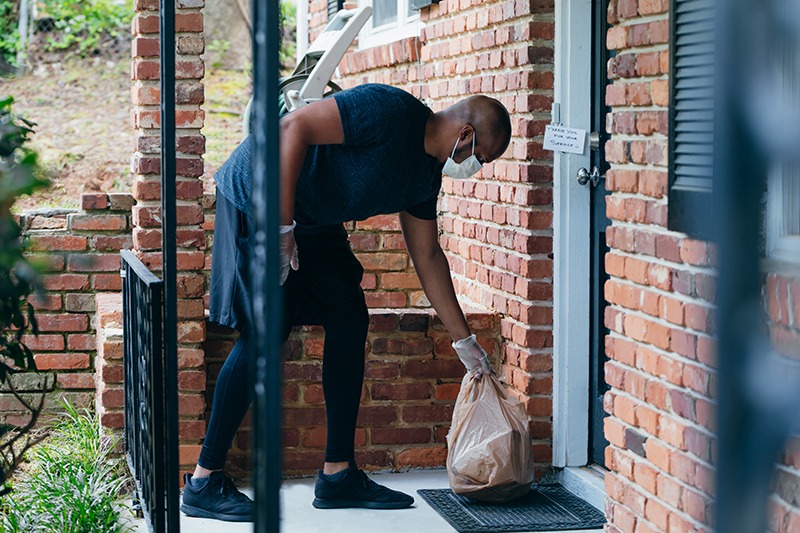 Part One of this series addresses the legislative approach to protecting gig workers’ rights in California and other states. Part Two will look at efforts to protect gig companies. Part Three will address the impact of the COVID-19 crisis. See the series landing page here.

California became the first state to change its labor law and grant gig workers more labor protections when Assembly Bill 5, better known as AB5, went into effect in January 2020. The law expanded the definition of an employee, making it harder for employers to classify regular workers as independent contractors. The law was mandated by the courts and essentially extended labor protections like paid leave to about one million people who had formerly been classified as contractors. But it’s been a rocky and controversial transition. Even before it went into effect, the calls for repeal started, followed by rallies and lawsuits.

Advocates of AB5 say it not only creates labor protections for gig workers, it prevents companies from avoiding billions in state payroll taxes each year. But opponents, many of whom are remote workers, say the new law is too broad. Instead of protecting them, it’s taking away their livelihood because clients don’t want to risk running afoul of the requirements for California-based freelancers.

New Jersey and New York are considering similar legislation, and California’s brief experience in creating and implementing AB5 can offer valuable lessons. Among the most important ones: Communicate early and often with workers and companies. As the Golden State lurches forward on its tumultuous path, its story is already influencing the way forward for policymakers elsewhere.

AB5 and the debate around its implementation have focused on gig economy workers. But the law’s origins go back to a 2005 lawsuit brought by Los Angeles delivery drivers who said they were owed lost wages after their employer abruptly reclassified them as independent contractors.

Dynamex Operations West, Inc. v. The Superior Court of Los Angeles County worked its way through the courts until 2018, when the California Supreme Court issued a broad ruling, clarifying a murky legal standard for what constitutes an employee versus an independent contractor. That gray area had long allowed for many companies—not just Dynamex—to misclassify workers.

“If a worker should properly be classified as an employee,” the court pointed out, “the hiring business bears the responsibility of paying federal Social Security and payroll taxes, unemployment insurance taxes and state employment taxes, providing worker’s compensation insurance, and, most relevant for the present case, complying with numerous state and federal statutes and regulations governing the wages, hours, and working conditions of employees.”

Independent contractors, on the other hand, bear the tax burden entirely and are not guaranteed labor protections. The practice of reclassifying workers is common everywhere but some states are more aggressive about enforcement than others. In an extreme example, New Jersey in late 2019 fined Uber $649 million for allegedly misclassifying its workers.

In California, arguably ground zero for the gig economy, state officials estimate some $7 billion a year in company taxes are lost due to worker misclassification. Steve Smith, communications director for the California Labor Federation, believes the increasing occurrence of business models that wholly rely on independent contractors has had an economic ripple effect.

“In California, our cost of living is so high, if you lose work for a couple of weeks and don’t have worker benefits to help get you through that, you may not be able to pay rent,” Smith says. “We’re home to the sixth largest economy in the world, but we’re also home to huge inequality. I think the gig economy contributes to that.”

In its landmark decision, the court cited concerns about unfair business practices and a much higher risk that rightful employees are classified as independent contractors rather than the other way around. The ruling said that workers are presumed to be employees unless they can meet the “ABC test” which says an independent contractor must: 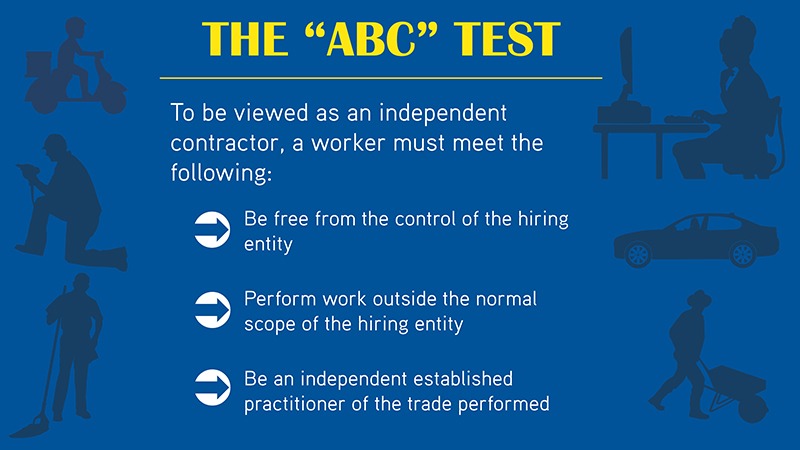 The court’s ruling applied to every worker in California and immediately created a new labor standard. Therefore, the state legislature had to respond swiftly to rewrite the law to both include the court-mandated ABC test and consider exemptions for certain professions. In January 2019, Representative Lorena Gonzalez introduced Assembly Bill 5 and debate over it dominated much of the legislative session. Among those in opposition were freelancer groups like California Freelance Writers United and companies such as Uber and Lyft who rely on independent contractors.

The final legislation does include carve-outs. Freelance writers, for example, can submit up to 35 pieces per year to one media organization as independent contractors. Some professions, including doctors and real estate agents, are exempt entirely. But for some one million independent contractors, the law meant California’s standard worker protections—including paid parental leave and a guaranteed $12 minimum hourly wage—would be extended to them as employees.

Despite all the legislative debate, the widespread impact of AB5 didn’t really start hitting the general public and generating more media coverage until it was signed into law in September 2019. Then, employers began reacting.

In December 2019, Vox Media’s sports site SB Nation announced that it would lay off about 200 California freelance bloggers in favor of hiring 20 full-time and part-time employees. Countless freelancers and independent contractors reported their work pipeline began drying up. Marie Brotnov, a freelance translator based in the Fresno area, says it wasn’t until the last month of 2019 that she and other translators even realized that AB5 would apply to them. She started receiving conflicting messages from the agency she contracted with and from past clients. Some said they couldn’t work with her at all, others said they could as long as she was a sole proprietor (which she already was), and others said she had to register as an LLC to keep their business.

By January 2020, Brotnov’s usual client list of about 10 agencies was whittled down to just one. “No one really understands this and that’s why companies are reeling,” she says. “Everybody’s in survival mode right now waiting for someone to explain it.”

Brotnov says she’s fortunate that her spouse has a full-time job so the loss in her income isn’t putting her out on the street just yet. But not everyone has that support.

That question of affordability is a key issue in regulating gig jobs. For most independent contractors, full-time employment working for just one company generally isn’t financially sustainable without some kind of subsidy or sacrifice. When an independent contractor’s partner has a full-time job with benefits, it makes the cost of things like health insurance or life insurance much more palatable. But for those doing everything on their own, as Smith points out, financial sustainability is much harder to come by—especially in California.

Many freelancers point out the flexibility of schedule and ability to negotiate their own rates are key attractions to freelancing and not something they could do working for an employer. But scores of people who work for app-based platforms don’t have that same power. As the independent contractor model for business continues to grow, more workers will likely have all the burdens of contracting with none of the benefits. Evidence of worker dissatisfaction is growing. Thousands of Uber drivers in May 2019 went on strike to protest the company’s pay cuts just as it was preparing to launch its IPO. According to a MasterCard analysis that same year, platforms often cite increasing freelancer retention as their biggest hurdle to achieving sustainable operations.

The debate over AB5 has even created divisions within industries. The American Society of Journalists and Authors and the National Press Photographers Association are suing the state over the law, while others—such as the Los Angeles Times’ Margot Roosevelt—warn that without it, there’s nothing to stop the growing practice of media companies laying off entire newsrooms and switching everybody over to independent contractors.

Even app-based companies aren’t all united against the law. BlueCrew and Wonolo both run on-demand marketplaces for blue-collar gigs but the former has always hired its workers as employees while the latter primarily hired its workers as independent contractors. Now, BlueCrew is seeing a surge of interest from clients trying to comply while Wonolo is drastically shrinking its California operations.

California is still deep in its growing pains over implementation and AB5’s sponsor, Gonzales, has a cleanup bill (AB1850) that could expand some of the exemptions for freelancers and other professions. Lawsuits are also in full force. Meanwhile, many professionals like Brotnov are filing as an LLC to give companies assurance that AB5 won’t apply to them.

The National Employment Law Project’s (NELP) Rebecca Smith said one of the biggest lessons from California so far is that legislation like this needs to come with an intense outreach campaign to help workers and businesses prepare. In addition, it’s clear that certain sectors need different approaches. “Carve-outs might need to be adjusted for some workers to make sure folks are getting the full range of rights under the law that they need to make these good jobs,” she says. “At the same time it needs to ensure that people who are independent contractors and who enjoy a degree of power in their relationships, can continue [that way].”

…one of the biggest lessons from California so far is that legislation like this needs to come with an intense outreach campaign to help workers and businesses prepare.

Lawmakers are taking notes as they craft their legislation. Before COVID-19, New York Governor Andrew Cuomo was pressing legislators to address the gig economy this year. He also announced his intention to create a Digital Marketplace Worker Classification Task Force to navigate the current labor landscape and make recommendations to lawmakers.

State lawmakers are split on how far to go on worker protections. Senate Committee on Internet and Technology Chair Diane Savino has criticized California’s approach, saying that it doesn’t provide the flexibility inherent to the gig economy. “They didn’t take the time to really study this,” she said last year.

She and Assemblyman Marcos Crespo introduced a bill in 2019 that would create a third type of worker classification—a “dependent worker,” which includes gig workers. The legislation, would extend to this classification the right to organize and bargain collectively through representatives of their own choosing. The bill stalled last year and is currently awaiting a hearing in committee.

Another bill proposed in 2019 is similar to California’s and is also still awaiting a hearing. Sponsored by New York State Senator Robert Jackson and Assemblywoman Deborah Glick, it used an ABC test to define an independent contractor.

New Jersey’s fine against Uber was its opening salvo to a major campaign to address worker misclassification in the state. Last year saw a slate of bills signed into law that all address enforcement and penalties for misclassification of workers. Prior to COVID-19, legislators were expected to debate bills similar to those in Albany with Senate President Steve Sweeney backing one that employs an ABC test.

In both states, lawmakers are taking a serious look at the diversity in gig professions and many are wary of a one-size-fits all solution. Nine out of ten workers on Postmates, for example, are on the platform for only three to five hours per week. But it’s more common for ride-hail drivers to use Uber or Lyft as their primary income. Legislators are also wary of the potential for lawsuits like those in California.

Eric Richard, lobbyist for the New Jersey AFL-CIO, has said he believes the legislation being crafted in the Garden State would be better able to overcome the legal challenges seen in California because it contains fewer carve-outs. It also has “more lenient” language in part B of the ABC test while part C of the test contains different language as well, according to Richard.

Rebecca Smith says other states have reached out to NELP about similar laws and that more legislation will surface in the coming years.

“Protecting labor standards has always been a central job for policymakers,” she says. “But now over the last few years, we’re seeing gig workers speak up. I think that has been the key everywhere.”