Key Takeaways from New York’s 2022 Budget: A Blueprint for Rebuilding 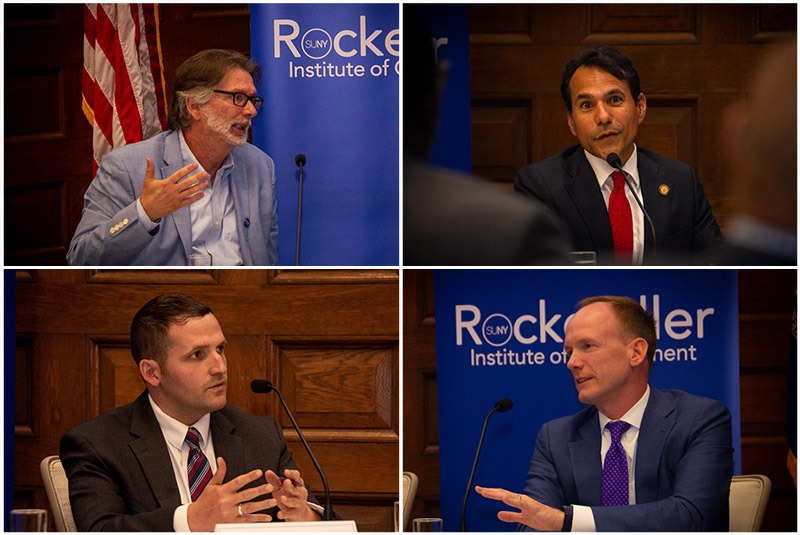 By Robert Megna and Laura Schultz

After a year of great uncertainty, New York State leaders came together to develop a 2021-22 budget that would serve as a blueprint for the state’s COVID-19 recovery. The budget included initiatives to assist those disproportionately impacted by the economic fallout of COVID-19, increased state support to school districts, and supplemental funding for tuition assistance, mental hygiene, and public safety. These plans were offset with reductions in other spending, federal aid, and targeted tax increases.

The wide-ranging discussion covered the mechanics behind the negotiating process, the motivation behind a number of unique initiatives in the 2022 budget, and what remains. The webinar in its entirety is available here. In this blog post, we explore four key takeaways from the discussion.

On March 1, 2020, New York State announced its first confirmed case of COVID-19. State and local officials scrambled to mount a response to a quickly worsening public health crisis. By March 20, the case count had climbed to over 7,000 and New York State was on “PAUSE” with all nonessential businesses closed—the backdrop for the 2020-21 budget negotiations.

There was dramatic uncertainty about the severity and duration of the pandemic. Leaders believed at the time that they would be facing unprecedented demand for services and significant revenue shortfalls. Budget Director Mujica emphasized the primary fiscal focus of the state in March 2020 was to preserve cash. The 2020-21 budget froze new contracts and pay increases and agencies were told to prepare for 20 percent cuts across the board. With a tax deadline delayed to July 2020, revenue flows were temporarily delayed. In response, the state borrowed $4.5 billion from the federal government. The budget was enacted anticipating an $8.2 billion revenue decline compared to the previous year and a projected $39 billion in revenue losses over four years. To allow flexibility as the fiscal situation unfolded, the budget included unprecedented mechanisms to further reduce spending in the event of worsening revenue shortfalls or increase spending in the event of better than forecasted revenues or federal assistance.

When preparing the 2021-22 budget, there were new uncertainties surrounding the fiscal situation. COVID-19 was at the peak of its deadliest surge to date but there was optimism as vaccines were becoming available. The federal political landscape was still not fully formed with control of the Senate undecided until January 16. While President Biden had promised federal aid to states and localities, the amount and timing were uncertain. In response to the uncertainty, the executive chamber proposed two budget options: one assuming $6 billion in federal funding and another based on $15 billion. On March 12, New York learned its fate with $12.7 billion going to the state, $10.8 allocated to localities, and $9 billion to schools. With just over two weeks to the April 1 deadline, the budget needed to adjust for the funding with limited guidance on approved usages and restrictions. The 2021-22 state budget agreement was announced on April 6, 2021. The state budget included $212 billion in all funds spending and a $311 billion infrastructure plan.

2. COVID-19 Was a Crisis Unlike Those Before

New York is not a stranger to a crisis. Over the past two decades, state leaders have had to navigate the response to and aftermath of the 9/11 attacks, the financial crisis of 2008, and Superstorm Sandy. All three leaders agreed that the COVID-19 crises was unlike those that the state government had managed previously. As it unfolded, little was known about the eventual magnitude and duration of the public health crisis. There was an understanding that government leaders were making life and death decisions. As New Yorkers were dealing with negative effects of the virus and the economic fallout, state and local governments needed to make sure there was food on shelves, people could stay in their homes, hospitals stayed open, and childcare was provided for essential workers.

“We have to deliver for the people. If we don’t people could literally die or get very sick… I don’t know if there has been a time in anyone’s memory where anyone has had to deal with that.”

The state needed to mount a response while also being disrupted. The public health guidelines implemented statewide also applied to much of the legislative staff. As workers adjusted to telecommuting, negotiations moved to online video conferencing software, such as Zoom. David Friedfel noted the pros and cons of the new operations. While it could be more efficient for everyone to hop on a quick call than to get in the same room, it can be challenging to have delicate conversations when you aren’t sure who else is in the room and can’t read nuances in expressions when negotiating.

“There was a certain statewide-ness to [this crisis]…. Everybody had to acknowledge that it was at their door.”

In addition to addressing the crisis at work, staffers had to deal with it in their homes as well. The impacts of previous crises were felt more acutely by some parts of the state than others. Over the past year, nearly everyone was disrupted as they dealt with the virus personally, among family members, and in their communities.

3. More Equitable Funding for Education (and How to Pay For It)

Two elements of the 2021-22 budget that garnered a great deal of attention were the commitment to fully fund Foundation Aid and the implementation of increased tax rates on the state’s highest earners.

Foundation Aid is the largest source of unrestricted funding for the state’s public school districts. The pool of Foundation Aid grew by $1.4 billion in the 2021-22 budget, an increase of 7.6 percent. The aid is distributed based on a formula that takes into account factors including the per pupil cost of instruction, regional costs differences, the economic and educational needs of the students, and the local contribution per pupil. The 2021-22 budget fully funded Foundation Aid for the next three years, meaning that every school district will receive the total allocation calculated through the formula. Foundation aid will be fully funded for the first time since the formula was established in 2007.

The panelists agreed that fully funding Foundation Aid was an important step for education in New York, but it leaves open an important conversation about equity. In 2019, New York spent more per pupil on public education ($25,139) than any other state nearly doubling the national average of $13,187. Despite the large total, there are still significant disparities between districts when it comes to per pupil spending. Wealthier districts supplement school budgets with local property taxes and rank among the most affluent districts in the country while districts in poorer communities rely heavily on state aid. These disparities have been worsened by COVID-19 when the most disadvantaged students suffered the most. While the federal funding could be used to address those issues in the short term, New York leaders will need to consider developing a more equitable formula that better assesses the needs of districts and students. As Blake Washington noted, “it is not an easy conversation to have.”

With the increased Foundation Aid, New York allocated more funds to districts in need. The additional funding has at least partially been offset on new revenue generated by the taxation of the state’s highest earners. Washington summarized the views of his Assembly conference members: “those of means must do more to support those who need it the most.” Friedfel participated in similar conversations with the Senate conference membership calling to tax the wealthy because they felt “they weren’t paying their fair share” coupled with a desire to balance the budget.

The longer-term impacts of the tax increase remains to be seen. Critics of the surcharge on those earning a million or more note that wealthy individuals living and working in New York City are now facing the highest personal income tax rates in the country. If these taxpayers move elsewhere or relocate their businesses, they could take a significant portion of New York’s personal income tax revenues with them. When asked to address concerns about potential outmigration of high earners, the panelists noted they were monitoring migration data closely. While previous tax increases in New York and other states had not resulted in outmigration in the short term, they also recognized that the factors that contribute to location decisions had changed in the past two years. Many wealthy individuals left large cities in the height of the pandemic taking advantage of remote work and the permanent effects are yet to be unknown. In addition, the SALT deduction cap magnifies the impact of state tax policies because taxpayers are no longer able to deduct their state taxes from their federal income. Given the changing landscape, policymakers will be monitoring tax revenue and relocation data closely over the coming years. 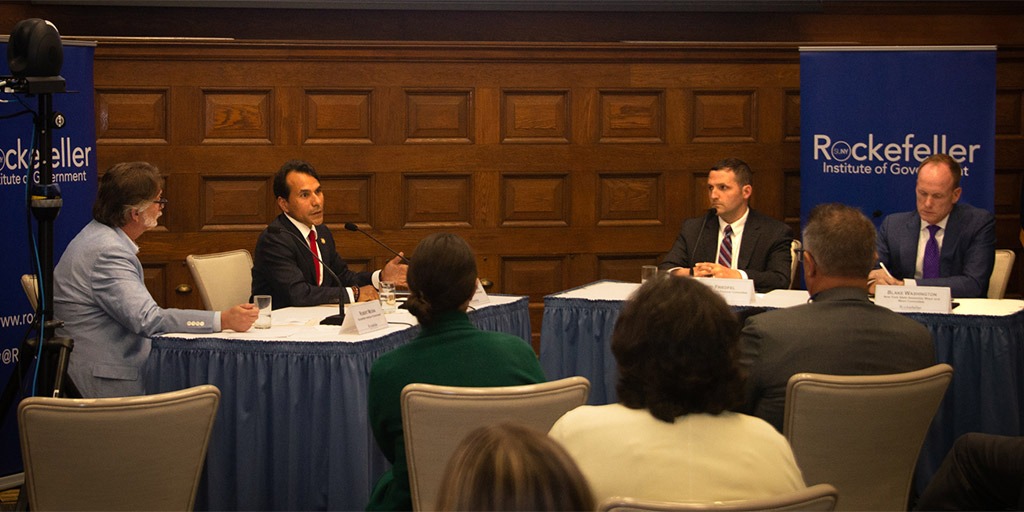 One of the largest priorities for the Senate conference is New York’s eldercare infrastructure. In particular, the Senate is interested in addressing the workforce challenges facing long-term care settings, including nursing homes, assisted living facilities, and homecare services. The industry faces turnover rates of 94 percent driven by low wages and grueling work. Friedfel said that the Senate conference’s goal is to “ensure moving forward there is enough staffing to provide that care.” This will include exploring policies that adequately fund those positions and addressing fraud and abuse in home care programs.

The Assembly conference’s top priorities fall under the umbrella of human services. This includes addiction response and mental hygiene, access to housing, and other policies that improve the outcomes for every day New Yorkers. Overdose deaths reached record levels in 2020 as anxiety spread and access to treatment was impacted. Washington asserted that addressing these topics “is not just the right thing to do, it is long overdue.”

The Division of the Budget will be focused on addressing the ongoing pandemic and its longer term impacts. According to the New York State Department of Labor, the June 2021 statewide unemployment rate was 7.3 percent, higher than the national rate of 6.1 percent. One in 10 job seekers in New York City are still without a job and many are in traditionally lower paying positions. A recent report estimated that 500,000 households in New York City owed $2.2 billion in rent. Federal and state eviction moratoriums and $2.7 billion in financial aid could help prevent tenant evictions, but the situation will need to be closely monitored over the coming months. In addition, school districts will be receiving a flux of federal funding designated to improve the outcomes for students most negatively impacted by COVID-19 and the Division of the Budget will need to assist districts as they plan to spend the funding.

The dynamics of New York politics have undergone significant changes since the Rockefeller Institute hosted the discussion on July 28. The transition to a new administration will mean new priorities in upcoming years. Despite these changes, it is likely that addressing COVID-19 and its lingering effects and support for human services will remain top priorities for New York State leadership.

Robert Megna is president of the Rockefeller Institute of Government