Greening Stormwater and Wastewater Systems: The Intersection of Climate and Infrastructure 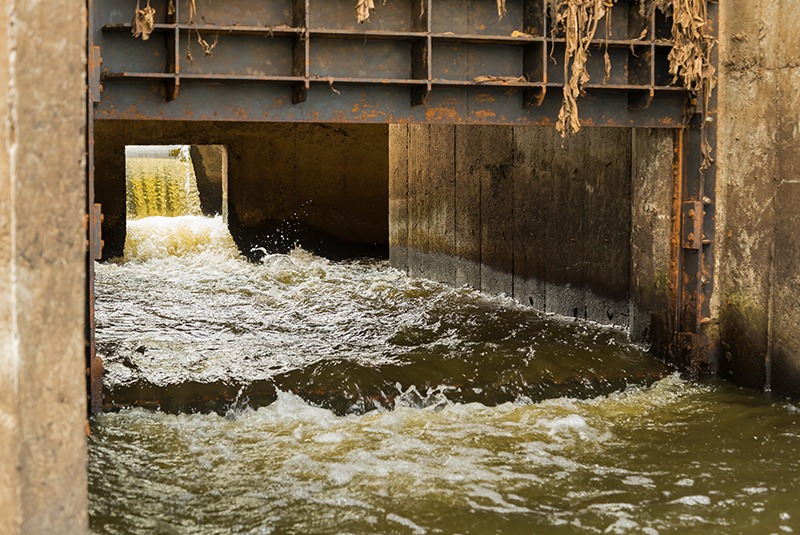 In the spring of 2022, the Center for Law and Policy Solutions student interns conducted an in-depth study of green infrastructure. Inspired by historic levels of federal funding for infrastructure, they wanted to know how local communities could use these funds to address the environmental health challenges related to both legacy infrastructure and continuing climate change.

Over the course of the semester, they explored how more volatile weather, increased precipitation, and rising sea levels were further impacting local water systems already in need of repair or replacement; they spoke with municipal leaders in the Northeast and Midwest to learn more about the investments being made in communities to try to address these challenges; and they presented their initial findings in a webinar. Their work has been further developed into a series of blogs that discusses the intersecting challenges of climate change and aging infrastructure, introduces the role green infrastructure can play, and highlights how two municipalities have integrated green infrastructure into their water systems.

See part II and part III of this series.

The intersection of climate change and aging wastewater systems presents a significant set of challenges for municipalities across the United States. Given that much of this infrastructure is at or nearing the end of its lifespan and there are further projected increases in precipitation, many cities and towns continue to grapple with the recurrent flooding of neighborhoods and the outflow of untreated wastewater into local waterways. In the face of these challenges and the need to make costly repairs or replace current systems, more localities are beginning to turn to green infrastructure as a way to complement their current systems and future projects. Particularly, as recent historic levels of federal funding for infrastructure through the Infrastructure Investment Jobs Act makes more such projects possible.

Green infrastructure is an approach and set of practices for water management that, according to the Environmental Protection Agency, “are designed to mimic the natural ways water flows over and absorbs into land to reduce stormwater pollution.”

The first in our blog series, this piece will address the underlying challenges to wastewater and stormwater management faced by communities in the United States. Our second blog will outline what green infrastructure is. The final blog will explore how two municipalities struggling with flooding in recent years have integrated green infrastructure into their planning in an environmentally and economically beneficial way by looking at examples from Albany, New York, and Toledo, Ohio.

Underlying Issues of Climate and Infrastructure

At the same time that these systems are in need of repair, they are being further tested by the impacts of climate change. For example, the city of Maumee, Ohio, a suburb of Toledo, reported to the EPA that their sewage system is unable to accommodate the rise in rainfall. One city official estimated that “as much as 150 million gallons of untreated water may have been discharged each year into the [Maumee] river.” The cost of required repairs and replacements for the sewage system is “$100 million over the next 30 years.”

While Maumee is just one example and these environmental impacts are uneven, the EPA notes that “since 1901, global precipitation has increased at an average rate of 0.10 inches per decade, while precipitation in the contiguous 48 states has increased at a rate of 0.20 inches per decade.” This is particularly the case for states in the Northeast and Midwest, and includes increasingly frequent and unpredictable extreme weather events, which, when combined with insufficient wastewater systems lead to runoff, flooding, and sewer and stormwater overflow into local water bodies.

As reflected in the graph of extreme precipitation (figure 3), intense wet weather events have generally increased over the last century in the United States. Neil O’Connor, engineer supervisor for the City of Albany’s Water Department, observed that, while a 100-year storm has a 1 percent chance of happening in any given year—meaning that that storm is likely to occur only about once every 100 years—”due to climate change, 100-year storms are happening every five years or every 10 years.” As climate change increases wet weather frequency and intensity throughout the United States, it poses an increased threat to infrastructure. The damage of increased flooding includes, but is not limited to, impassable roads, burst pipes, and the introduction of untreated sewage, all of which place a financial and health burden on municipalities and their residents.

Ideally, rainfall and melting snow seep into the ground and remain in place. However, when the terrain, stormwater systems, and sewer systems are not able to absorb or collect all of the water it travels on the surface, runs off into waterbodies, and/or results in flooding. Complicating these impacts, many municipal systems have what are called combined sewer systems (CSSs). As opposed to separate sanitary sewers (SSSs), in a CSS, both sewer and stormwater drains filter into a single-pipe system. As noted by the EPA, “CSSs were among the earliest sewer systems constructed in the United States until the first part of the twentieth century,” and approximately 772 cities in 32 states are served by such combined systems. Most of these combined sewer systems are likewise located in the Northeast and Midwest (see Figure 4), where precipitation is most likely to increase due to climate change.

Wet weather with excess stormwater can cause these systems to reach or exceed capacity resulting in flooding and combined sewer overflows (CSOs) of untreated water into nearby waterways. Typically, wastewater is sent to a treatment facility, where it can be processed, filtered, and treated for contaminants before being recycled or sent into local water bodies. But, because these systems are combined, when excess precipitation events occur, significant amounts of stormwater in the combined sewer can cause the wastewater (with both stormwater and sewage) to exceed the systems’ capacity to process it. As a result, wastewater is diverted, sometimes in significant amounts, into local waterways along with the contaminants it may contain: “untreated or partially treated human and industrial waste, toxic materials, and debris, as well as stormwater.”

Combined Sewer Systems (CSS). Municipal systems in which both sewer and stormwater drains into and filters through a single pipe. Any overflow is potentially contaminated with sewage.

Separate Sanitary Sewers (SSS). Systems in which sewer wastewater and stormwater are kept apart meaning that stormwater is not contaminated.

In 2004, the EPA estimated that “about 850 billion gallons of untreated wastewater and storm water are released as CSO each year in the United States.” The EPA worked to address many of the largest systems with untreated overflows in the 1990s and early 2000s, initiating enforcement actions across 213 large CSSs. By the end of 2016, 203 of those systems had been addressed.

Still, the broader number and total volume of CSOs in the United States remains high. The EPA oversees ongoing CSOs through the National Pollutant Discharge Elimination System (NPDES). Sewer systems are required to obtain permits that allow them to discharge this wastewater into waterways in certain circumstances (like during wet weather events). As of 2015, “859 active NPDES permits for CSO discharges had been issued in 30 states plus the District of Columbia and Puerto Rico,” with 184 of these in the Great Lakes Basin, which includes parts of Indiana, Michigan, Illinois, Minnesota, Wisconsin, Ohio, New York, and Pennsylvania. Each of these permits may cover multiple overflow points. In New York State alone, for example, there are over 900 permitted overflow points from combined sewers (see figure 5). According to the environmental advocacy organization Riverkeeper, “in addition to hundreds of CSOs in New York City, there are 92 in the Capital District, 58 in the Hudson River Estuary, 52 in the Mohawk River, 26 in New Jersey and 12 in the Upper Hudson.”

The health of our municipalities depends in part on functioning wastewater and stormwater systems that can mitigate the impacts of climate change. Over the past 50 years, policies protecting water quality in the United States have spanned from the seminal Clean Water Act to the most recent passage of the Infrastructure Investment Jobs Act (IIJA). The recent inclusion of funding for incorporating green infrastructure into local, state, and federal projects paves the way towards building more sustainable and healthier built environments, but it will also depend on local communities to implement more sustainable gray and green systems.

The authors were Center for Law & Policy Solutions (CLPS) research interns for the spring 2022 semester.