What Do Local Governments Need to Address Public Health Crises? 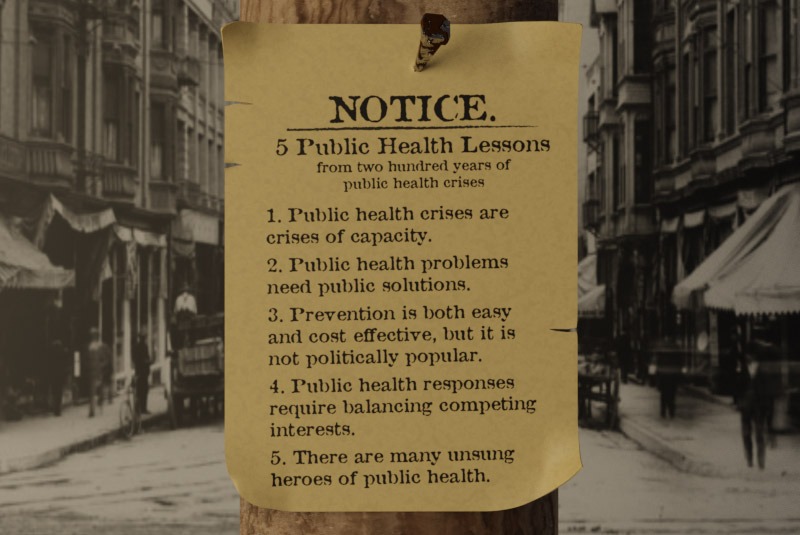 For the past decade, we have been studying how local governments respond to public health crises: from nineteenth-century yellow fever and cholera outbreaks to the contemporary opioid epidemic. Although the years, elected officials, and particular health problems change, the patterns are strikingly similar. Here are five lessons that we’ve learned.

(1) Public health crises are crises of capacity. Nineteenth-century municipal documents record page after page of deaths due to contagious diseases like yellow fever and cholera. Disease is constant. Capacity to manage disease outbreaks, however, varies significantly across governments and over time.

Capacity means ability. It entails both expertise to know what to do and infrastructure to carry it out. Some nineteenth-century local governments were able to marshal resources to accomplish basic tasks, like collect trash and install sewers, which prevented disease outbreaks. Others lacked even the most basic infrastructure and, sometimes, went so far as to rebuff local businessmen when they offered to help at their own expense.

Today, we still rely on local governments to monitor and maintain public health. And, like centuries ago, they have vastly different resources. Los Angeles County, the nation’s largest county, has large-scale problems but also substantial resources—from expertise to infrastructure—to assess these problems and target solutions. More common, are smaller, rural counties that have limited resources and often lack expertise (like epidemiologists) on hand in times of crisis. These smaller counties may often lack basic services, like doctors, hospitals, and access to ICU beds in their communities.

Yet, diseases—from yellow fever to COVID-19—are equally deadly in poorly resourced areas. Federal and state officials need to take into account the capacity that communities have at their disposal when responding to a public health crisis. Large cities have more rapid transmission, but they have more healthcare professionals to treat people. Small, rural towns may have slower transmission, but they also have fewer healthcare professionals. Many rural communities in states that didn’t expand Medicaid as part of the Affordable Care Act of 2010, have seen hospitals close or services gutted. In short, the community’s capacity to address public health problems has been diminished. Now in the face of a widespread epidemic, it will not be easy for them to ramp up.

To adequately address the current crisis, federal and state officials need to accurately assess community capacity to respond to the crisis while accounting for these existing gaps.

Public health requires sustained attention, yet it is easy to overlook capacity investment in good times. We have seen this pattern before, when diseases ravaged the country in the nineteenth century, state and local governments created and invested in boards of health. But, when the disease abated, officials quickly disbanded the boards, leaving the area vulnerable for the next disease outbreak. Governments need to sustain public health efforts even in the absence of an immediate public health threat.

Governments also need to be able to work together, and the federal government has the infrastructure at its disposal to coordinate action across the states. The current crisis illustrates not what is best about federalism—the laboratories of democracy where new innovations are developed—but its weaknesses—the many holes between state responses. The federal government can step in, unlike nineteenth century America when it was largely absent from public health discussions because it was so weak. Then, states stepped up and took action to prevent the spread of disease. But then, like now, transportation meant that diseases could not be constrained to state boundaries. The problem is bigger than any single state.

We need a coordinated response across levels of government.

(3) Prevention is both easy and cost effective, but it is not politically popular. Voters and elected officials have short time horizons. Political actors are rewarded for stepping in after the fact and are penalized for taking preventative strategies, even though prevention could save lives and financial resources in the long run.

One person on the frontlines of the opioid epidemic in New York State described the problem with funding substance-use prevention this way: “I think prevention will never get you elected because, you know, how do we quantify prevention?” Research supports his assessment. Voters find policies with up-front prevention costs to be less attractive than more expensive policies that pay large amounts after the fact. According to one study: “voters reward relief spending but punish prevention spending.” And, in a study of natural disasters, researchers found “voters significantly reward disaster relief spending” but “show no response at all, on average, to preparedness spending, even though investing in preparedness produces a large social benefit.”

There is no easy way to encourage people to value prevention spending. One potential strategy is to quantify and publicize projected savings—both in terms of dollars and human life—from averted crisis, much like the way the Congressional Budget Office assesses the costs of new bills.

(4) Public health responses require balancing competing interests. Permitting sick passengers to disembark a ship allows them to seek treatment, but it also puts residents of the port city (and beyond) at risk. There are competing values at play, and it’s not always clear what the right answer may be.

Like values conflicts today, disease outbreaks in the nineteenth century pit public health officials, who wanted to quarantine ships, against the owners whose livelihoods depended on the ships’ cargo. Members of the public, too, were critical, noting that “desperate diseases at times require extreme measures.”[1] Similarly, in the current environment, the President and other economic conservatives publicly wonder if the balance between public health and private enterprise has swung too far in favor of the former.

Designing and implementing public policy requires balancing competing values and the current crisis brings into sharp focus what is at stake: public health and the economy.

(5) There are many unsung heroes of public health. Medical personnel put their lives on the line in a public health crisis, but county health professionals, sanitation employees, sewer workers, street cleaners, and those working in addiction services also play crucial roles. These people, whose work is often taken for granted, are part and parcel of maintaining the nation’s public health. They prevent the outbreaks that used to sweep across the country and avert countless deaths today. We need to think about how to incentivize people to work in these professions, how to keep them in their positions, and how to meet potential future needs now.

It’s easy to take government for granted when garbage is picked up, the streets are clean, and disease outbreaks are confined to history. We tend to notice government only when it fails, which makes spending on public health measures difficult to sustain. So, how can we build support for prevention measures that prevent disease outbreaks? One strategy is to follow in the footsteps of Franklin Delano Roosevelt. FDR ensured that Social Security would remain robust even after he left office by letting contributors know just how much they paid in to Social Security and how much they would get when they retired, giving everyone who ever paid into the system a stake in its longevity.

Certainly, support for public health and the public services that sustain it is more complicated than an algorithm that calculates eligibility and benefits for Social Security. But the principle is the same. Prevention costs money in the short-term, but it also saves lives and resources in the long run. How much is that worth?