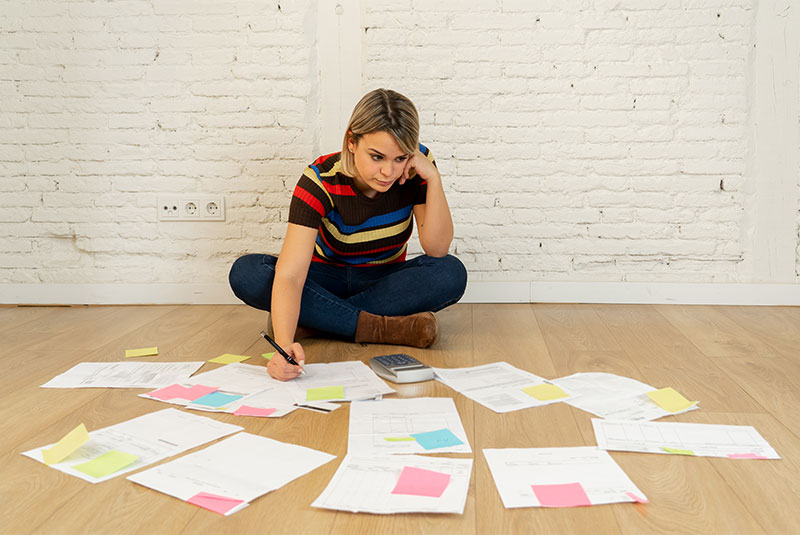 “What the hell has that got to do with the virus?”

So exclaimed South Carolina Senator Lindsey Graham in describing his battle to keep student loan forgiveness out of the $2 trillion economic stimulus package negotiated by Congress in March. With behind-the-scenes pushes from both parties to load the relief package with items unrelated to the COVID-19 outbreak—including stronger emission standards for airplanes, subsidies for PBS and the National Endowment for the Arts, and more—Senator Graham’s plea for policymakers to focus on the immediate problems posed by the coronavirus epidemic was a powerful one.

Still, few people—federal lawmakers included—would deny that the economic consequences in store for the country in the wake of the virus are likely to have a particularly devastating impact on individuals and families who were in financial distress even before the outbreak. Included among these people are student borrowers who are struggling to manage their loan debt burdens.

The final federal stimulus package adopted by Congress did not include the cancellation of any student loans, but it did give each student borrower a six-month interest-free break on making payments on federal loans. The deferment hit a much-needed pause button: those with federal student loans will not need to make a payment until October 2020; interest and penalties will not accrue during the break; and, the federal government will cease all its collection efforts on delinquent loans. But it did not at all change the structure of the student debt crisis in the country.

Focusing now on how best to relieve some of the burden of student loan debt in the future can provide borrowers relief they will need more than ever after this six-month hiatus.

The proposal pushed into the first draft of the federal stimulus package that earned Senator Graham’s ire was the cancellation of up to $10,000 of any borrower’s student loan debt. Besides being unrelated to the coronavirus outbreak, numerous analyses have revealed a regressive and often inequitable effect of typical student loan-cancellation proposals.

For example, an analysis by Brookings scholar Adam Looney of the loan-cancellation proposal offered by Senator Elizabeth Warren (D-MA) in her presidential campaign platform—one of the highest-profile loan-cancellation proposals yet—calculated that the top 40 percent of households by income would reap two-thirds of the benefits, while “the bottom 20 percent of borrowers by income get only 4 percent of the savings.” Other inequities that come with most blanket loan-cancellation plans were highlighted when a frustrated voter confronted Senator Warren at a rally in Iowa noting he had saved and sacrificed to pay for his daughter to complete college debt-free and asking if he would get his money back under her proposal. “Of course not,” Sen. Warren replied. “So, you’re going to pay for people who didn’t save any money and those of us that did the right thing get screwed,” said the father.

The deferment hit a much-needed pause button… But it did not at all change the structure of the student debt crisis in the country.

Another recent analysis by Brookings finds that student loans “associated with graduate degrees account for 50 percent of the outstanding student debt.” That is, half of the nation’s current outstanding student debt is held by individuals who earned postgraduate degrees, those who typically are the highest-earning college graduates. Thus, most loan-cancellation proposals could end up disproportionately favoring these higher-income borrowers.

Matthew Chingos, Vice President of Education Data and Policy at the Urban Institute, noted that the loan-cancellation policy originally proposed in the stimulus package would strongly favor those making larger monthly payments, which disproportionately are higher-income households, and would free up only minimal monthly income for lower-income individuals who typically are making much smaller payments.

According to a recent Inside Higher Ed article, “left-of-center advocates” raised equity issues with proposed loan-cancellation plans, too. While most adults were (and still are) slated to receive $1,200 each in economic stimulus funds under the economic relief package, only those individuals fortunate enough to already have gone to college would have been given an additional $10,000 in the form of debt cancellation. Those who didn’t have that opportunity would receive only the stimulus check.

Focusing on the Burden

Even the pause offered in the federal relief package will not put money in the pockets of those borrowers most in trouble: those already in default and not making payments. Typically, those in default on their student loans are lower-income borrowers often with an incomplete college career, folks who may suffer the most in an economic downturn and benefit the most from a thoughtful nationwide programmatic restructuring of student debt.

Use loan cancellation as an incentive to complete college. The primary purpose of student loans is to make completing college more financially achievable. So why not create a loan cancellation program that has a similar purpose?

Student borrowers who do not finish their college degree are three times more likely to default on their loans than those borrowers who graduate, and 42 percent of households with outstanding student debt are headed by someone without a bachelor’s degree. Loan cancellation could be used as an incentive to get defaulters and other noncompleters back to and through college. For borrowers currently in default who did not finish college, the federal government could cancel all outstanding debt related to first-year (and even second-year) expenses immediately upon completion of their college degree. Wiping out these proportionately small loan balances in exchange for increasing college completion rates of lower-income individuals seems like a pretty good deal.

Waiving all interest and penalties that were levied on defaulted loans for those who go back and complete their college degrees is a logical additional incentive that would further advance the student loan program’s mission of supporting college completion.

Loan cancellation could be used as an incentive to get defaulters and other noncompleters back to and through college.

Encourage college financial aid offices to act as student partners. The complexities of completing the FAFSA, the Free Application for Federal Student Aid required to be completed for students to receive financial aid, have been well–documented. In 2018, 37 percent of all high school graduates applying to college did not complete and file a FAFSA. Worse yet, an estimated $2.6 billion in federal Pell Grants was left on the table by more than 660,000 graduating high school seniors who were eligible for these grants but simply failed to fill out and submit the required form. There is little doubt that many of these were first-generation and low-income college prospects, each of them missing out on average tuition assistance, and correlated debt avoidance, of $3,900 annually.  (A recent Rockefeller Institute study examined the daunting financial literacy challenges facing student borrowers.) College admissions and financial aid offices should step up and become the full partners with students they are supposed to be in this process, helping ensure all students eligible for non-loan aid receive it.

Public colleges and universities, at a minimum, could offer all entering students whatever assistance they need to complete and file the FAFSA, including sitting with families to walk them through every step of the process. Filing the FAFSA could be required before a college may admit a student, adding an element of responsibility to college financial aid offices that is currently missing. Requiring college admissions and financial aid offices to help complete each student’s FAFSA may generate additional and welcome pressure on the US Department of Education to radically simplify the form, filing, and approval process, too.

Then, before students graduate college (or even by the end of each academic year), college financial aid offices could be charged with reviewing each student’s eligibility for assistance. If federal Pell Grants were available but not received, student tuition accounts at the school could be instantly credited and financial aid offices would help the eligible student file a claim with the US Department of Education for retroactive application of these grants. Paired with this practice should be cancellation of an equal amount of loan debt, thus reducing any amount owed even before students start paying off their loans.  Federal student aid regulations will need to be changed to allow such a plan to be enacted, of course, but getting promised aid to all eligible students doesn’t seem particularly controversial—it’s just not being done.

Automatically enroll all student borrowers in a simplified, income-based automatic repayment plan. The US Department of Education currently offers at least four different income-based student loan repayment options. These programs are designed to address the heart of the student debt problem: the financial burden that monthly payments put on individuals. Required monthly repayment amounts are tied to a set proportion of a borrower’s monthly income—usually 10 or 15 percent of net discretionary income—for a set number of years, essentially capping the financial burden on the individual for the life of the loan. But, as Brookings notes, “even admirers of the income-driven repayment approach say the current approach in the U.S. is too complicated to work well.” The application process is rigid and eligibility requirements are confusing, and as a result fewer than 30 percent of all borrowers enroll in these programs.

Not surprisingly, these burden-focused repayment plans result in fewer borrowers defaulting on their loans: default rates for those not in income-driven repayment plans are more than twice as high as for those who are. Enrolling in these plans also helps borrowers who are already in trouble. An analysis by the Consumer Financial Protection Bureau found that student loan borrowers who had previously defaulted, had their loans rehabilitated, and then enrolled in an income-driven repayment program were five times less likely to re-default as their peers who did not enroll in such a plan.

… default rates for those not in income-driven repayment plans are more than twice as high as for those who are.

To ease the complexity of enrolling in an income-driven repayment plan, avoid the requirement for annual recertification, and provide flexibility particularly in times of a borrower’s unemployment, all student loan borrowers could be automatically enrolled in a payroll-based repayment plan, with payments automatically deducted from paychecks just as Social Security Insurance and Medicare taxes are. Just such an idea was notably outlined last year in the New York Times by Senator Lamar Alexander, Chair of the Senate’s Education Committee.

Amounts withheld and used to make loan repayments could be calculated as they are now, designed not to exceed 10 percent of discretionary income. Those who earn more would automatically pay more, but every borrower’s burden—the percentage of their discretionary income going to pay off their student loans—would be equal no matter how much or how little someone borrowed. If an individual became unemployed, provisions could be made to temporarily suspend repayment obligations until the borrower secured new employment and once again began receiving regular paychecks. Loan-payment obligations were suspended for six months to accommodate the potential economic stress borrowers may potentially be feeling from the COVID-19 outbreak; suspending loan-payment obligations in the certain economic stress situation of unemployment would seem to make similar sense.

The United Kingdom and Australia automatically enroll all student borrowers in income-driven repayment programs, so there are real-world examples of such systems at work. America can become one of them.

While the coronavirus epidemic may not have a hell of a lot to do with the student loan crisis, the forecasted economic devastation sure does. Equitable, burden-focused reforms can be put in place to help ward off nearly certain financial pain for student loan borrowers.