Coronavirus Has Improved Air Quality. What Does That Mean for Climate Policy? 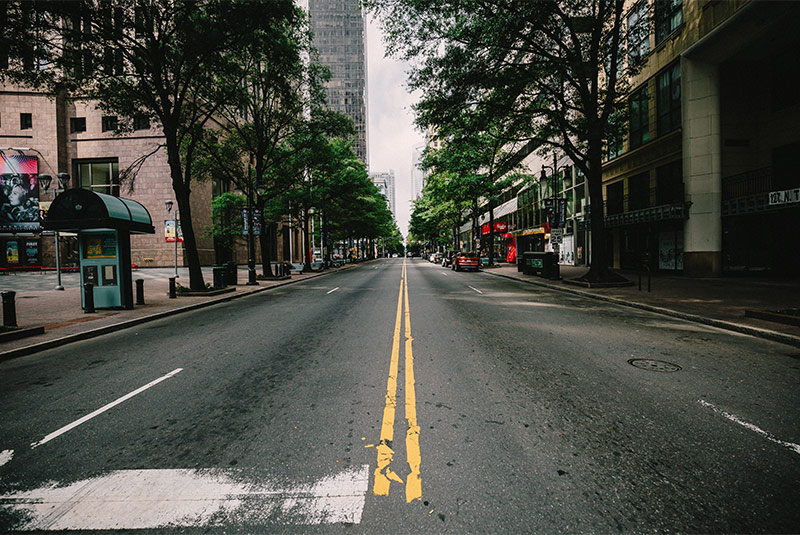 Coronavirus is changing how the world operates, most notably in nations that are now under some sort of social distancing or quarantine measure. Many industries not deemed essential have shut down or limited production and suspended sales both stalling the economy and causing widespread unemployment.

The pause of daily, routine activities is having an effect on air quality as well. Worldwide, carbon dioxide emissions—a leading contributor of climate change—are estimated to fall 5 percent or more this year—a sharper decline than the 2009 Great Recession when emissions fell by 1.4 percent.

In the most extreme example, Carbon Brief, a climate science research website, estimated levels of carbon dioxide fell by 25 percent in Wuhan, China after all activity in the city of 11 million people was suspended for over 10 weeks.

India, a country with a serious pollution problem, took aggressive action by suspending all non-essential production and sale of goods and services for all 1.3 billion people in the country on March 24, 2020. This drastic action reduced India’s air pollution dramatically in a single week. The concentration of particulate matter 2.5 (PM2.5), which is a measure of microscopic atmospheric debris that pose significant health risks, fell by 71 percent.

The New York metropolitan area, hit hardest by the coronavirus, has also experienced a steep drop in emissions. NASA recently released satellite imagery of reduced nitrogen dioxide, a major air pollutant linked to respiratory infections, in the atmosphere after stay-at-home measures were enacted.

It is too soon to draw conclusions about the coronavirus’s total impact on air quality, however, we know it does not require a global pandemic to reduce harmful emissions. The Clean Air Act of 1970 is evidence that smart and effective policies can dramatically reduce pollution and improve air quality: between 1970 and 2017, several common pollutants (except carbon dioxide) collectively fell by 73 percent, while gross domestic product increased 324 percent, meaning it is possible to grow the economy in an environmentally conscientious manner.

Immediate recovery, relief, and focus on medical care are paramount, but the lesson that pollutants and carbon emissions can be dramatically reduced through human action should carry into long-term policy making. Emissions and pollutants are down because of extreme social distancing measures which have had high social and economic costs, but it is far from the only policy that can deal a real and sustainable blow to pollution and global warming. Once the pandemic subsides and the economy is back up and running, policymakers can consider policies that keep emissions down.

Like the coronavirus response, climate policy requires federal support and state cooperation because a state’s progress can be offset by a lack of policy from a neighboring state. One way to achieve collective action is for the federal government to develop a meaningful social cost of carbon—a fiscal measurement of the costs each ton of emitted carbon dioxide has on the environment and society.

Carbon dioxide is a heat-trapping gas that intensifies the effects of climate change, such as increases in the frequency and severity of floods and droughts. According to the Government Accountability Office, the federal government has spent more than $350 billion on disaster response, insurance, and repairs related to climate change over a 10-year period since 2007.

The Trump administration estimated the social cost of carbon is between $1 and $7 per ton; the Obama administration proposed a range of $42 to $62 per ton, and other research estimates costs could be as high as $400 per ton. In 2018, Canada put a price on carbon emissions, set to reach $50 per ton in 2022, and estimates a same-year carbon dioxide reduction of 80 to 90 million tons—the equivalent of “taking 23-26 million cars off the road for a year.”

Like the coronavirus response, climate policy requires federal support and state cooperation because a state’s progress can be offset by a lack of policy from a neighboring state.

An alternative to a carbon tax is a cap-and-trade program that sets a limit on major polluters’ emissions (and gets stricter over time) and allows emitters to trade a limited number of “emission permits” in a carbon marketplace. What separates the cap-and-trade from a carbon tax is that the price of carbon is not determined by policymakers but by the buyers and sellers in the market. Currently, there is no federal emissions trade program, but several states have enacted regional markets and have successfully reduced emissions. Under cap-and-trade emitters that can easily transition away from carbon emissions would be able to fund that transition by selling their emission permits, and emitters with difficult or costly transitions could purchase those permits to stay in business.

States also can supplement a cap-and-trade with a renewable portfolio standard—a policy that requires electric utilities to supply a certain percentage of electricity from renewable sources. Currently, 29 states have a renewable standard, accounting for approximately half of all growth in renewable electric generation since 2000.

Amid the pandemic, we have seen cooperation between the public, private entities, and the government to combat the coronavirus. A similar level of cooperation is needed to address climate change. However, climate policy is not a priority for the current administration, as evidenced by the low social cost of carbon estimate and dozens of other rollbacks of Obama-era environmental policies, including the recent changes in auto emissions standards. In the absence of federal leadership, collective action by the states will be necessary to advance climate policy and establish environmentally sound and sustainable programs.