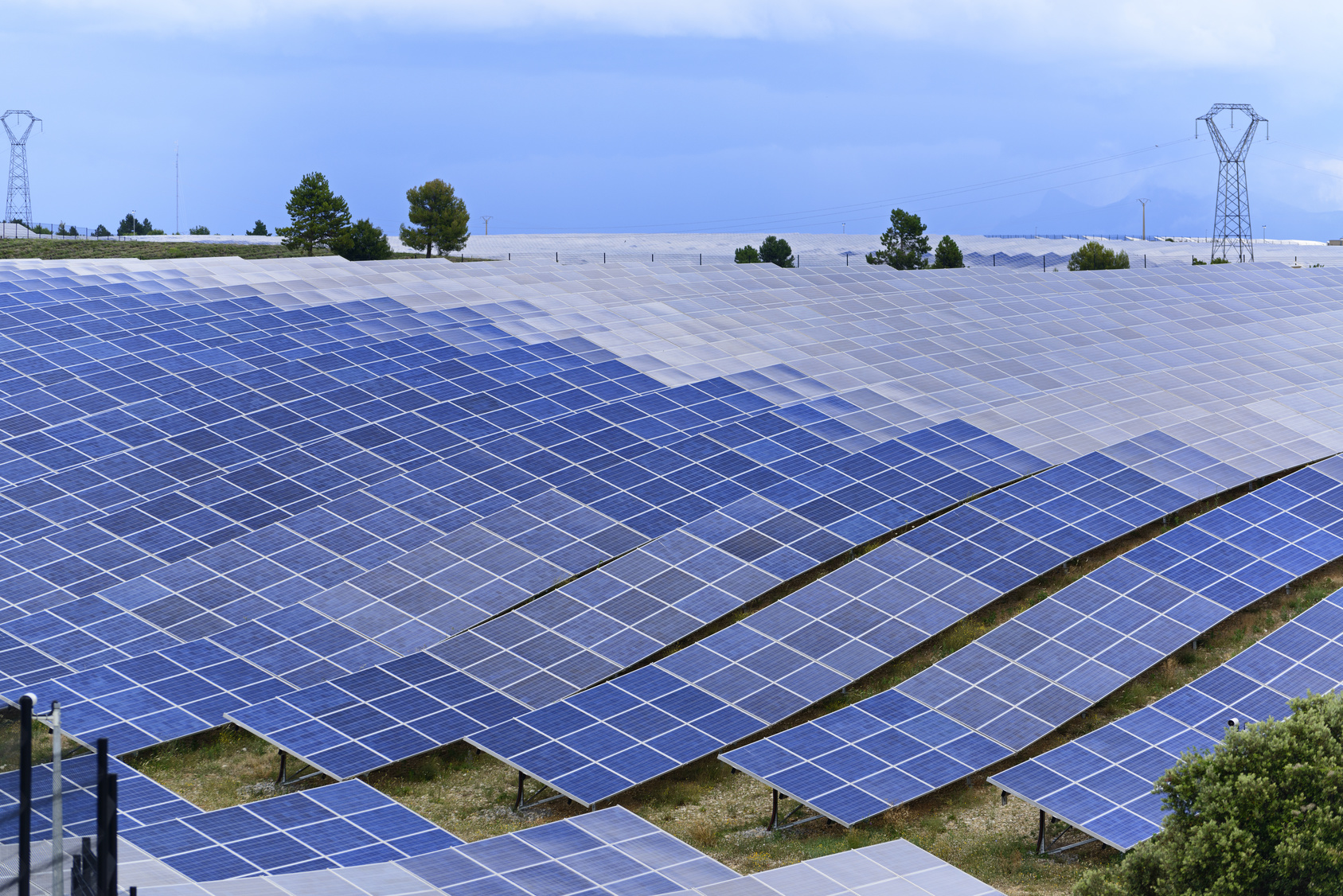 One of the most significant policy differences between the Trump and the Obama administrations has been over energy policy. On this policy front, President Trump has articulated a clear and consistent message going back to the campaign. He has called for greater production and use of coal and a return of energy regulation back to the states. But in some ways, while the proposed beneficiaries of the president’s energy doctrine are the same, he has two conflicting governmental visions to achieve his goal.

On one hand, the Trump administration is returning energy regulatory authority to the states by unwinding Obama-era climate change programs, including the Clean Power Plan regulations, the first-ever federal regulations to lower CO2 emissions,[2] as well as exiting the Paris Climate Agreement — a joint multination effort to combat climate change.

But, on the other hand, the Trump administration is using the federal government to directly intervene on behalf of certain energy sectors, like providing federal financial incentives and rewriting federal rules to give preference to the coal industry.[3]

It is still too early to tell which, if any, of the competing policies will have their intended effect in reversing the downward trend of coal, specifically because states and large institutional players are now aggressively countering through competing programs and policies. We review the possibility of states and other institutional players doing more now that the federal government has given climate change regulatory responsibility back to the states.

After years of strong federal regulatory action, climate change efforts are now left mostly to the states, which have been actively filling the void. Although the Trump administration has moved to have states be the center of energy policy, in many ways the stage was set when two dozen states sued the Obama administration’s authority to regulate power plants under the Clean Power Plan.[4] In response, the Supreme Court, in an unusual move against the government, blocked the Obama-era regulations from being implemented until the case was fully argued, so the federal rules were never executed.[5] Although partisanship largely dictated who sued the Obama administration over climate change regulation, the push for states’ rights under Obama to regulate the power sector has created opportunities for states to now oppose the Trump administration’s action to roll back federal climate change regulations. In other words, in the climate change fight, these states may have won the battle, but could lose the war. 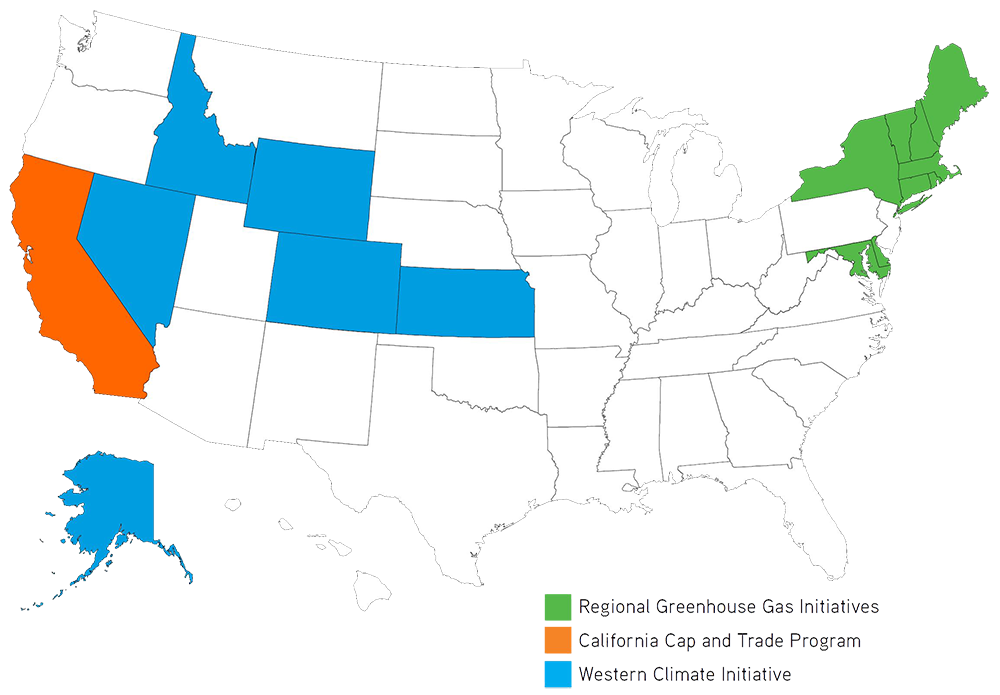 However, given that the carbon emissions released in one state don’t necessarily remain confined to that state, regional approaches by states are also critical. Regional approaches also help level the playing field so states do not face competitive disadvantages. Even with the void created by the recent federal rollbacks, there are successful regional models states could follow.

In the shadow of weak federal climate rules, how do we get sovereign states to cooperate with one another to take on the issue themselves? The Regional Greenhouse Gas Initiative (RGGI) is a collaborative regional program that could serve as a model for states wishing to slow greenhouse gas emissions, such as CO2. RGGI is the nation’s first mandatory regional market-based cap-and-trade program. The program works like this: the states collectively establish a cap on the amount of CO2 pollution emitted from power plants in the region. The states issue a limited number of tradeable carbon allowances — or paying for pollution — through a regional market. The revenue raised from the process is used to invest in clean energy and clean-energy technology. For example, in New York, power producers buy carbon allowances up to the cap through an auction and some of those proceeds have financed the carbon-free NY-Sun solar installation program, among other programs.

RGGI applies to the electric generation sector[10] and it was adopted in 2005 by a Memorandum of Understanding (MOU) by the governors of seven states: Connecticut, Delaware, Maine, New Hampshire, New Jersey, New York, and Vermont.[11] Two years later, Maryland and Massachusetts joined.[12] Under the MOU, the actual cap-and-trade program commenced in 2009.

Under the MOU, each state implemented the program through policy, regulation, and laws. In addition, a 501(c)(3), called RGGI, Inc., was created to manage the program and provide technical assistance to the states. Although all sovereignty remains with the states, RGGI, Inc. — which is made up of staff from each state — serves an important coordinating function for the program.

Overall, the program has been successful in achieving its goal to lower CO2 emissions. A recent analysis found that CO2 emissions would have been 24 percent higher in the region if RGGI was not in place.[13] Moreover, about $2 billion in proceeds have been raised for the member states to invest in clean energy technology, energy efficiency, and other climate change mitigation initiatives. Like other states, in New York RGGI funds have been a large source of financial support to expand renewable energy, like solar and wind.

Figure 2. Actual and Projected Reductions in CO2 Emissions Under RGGI 2014-20 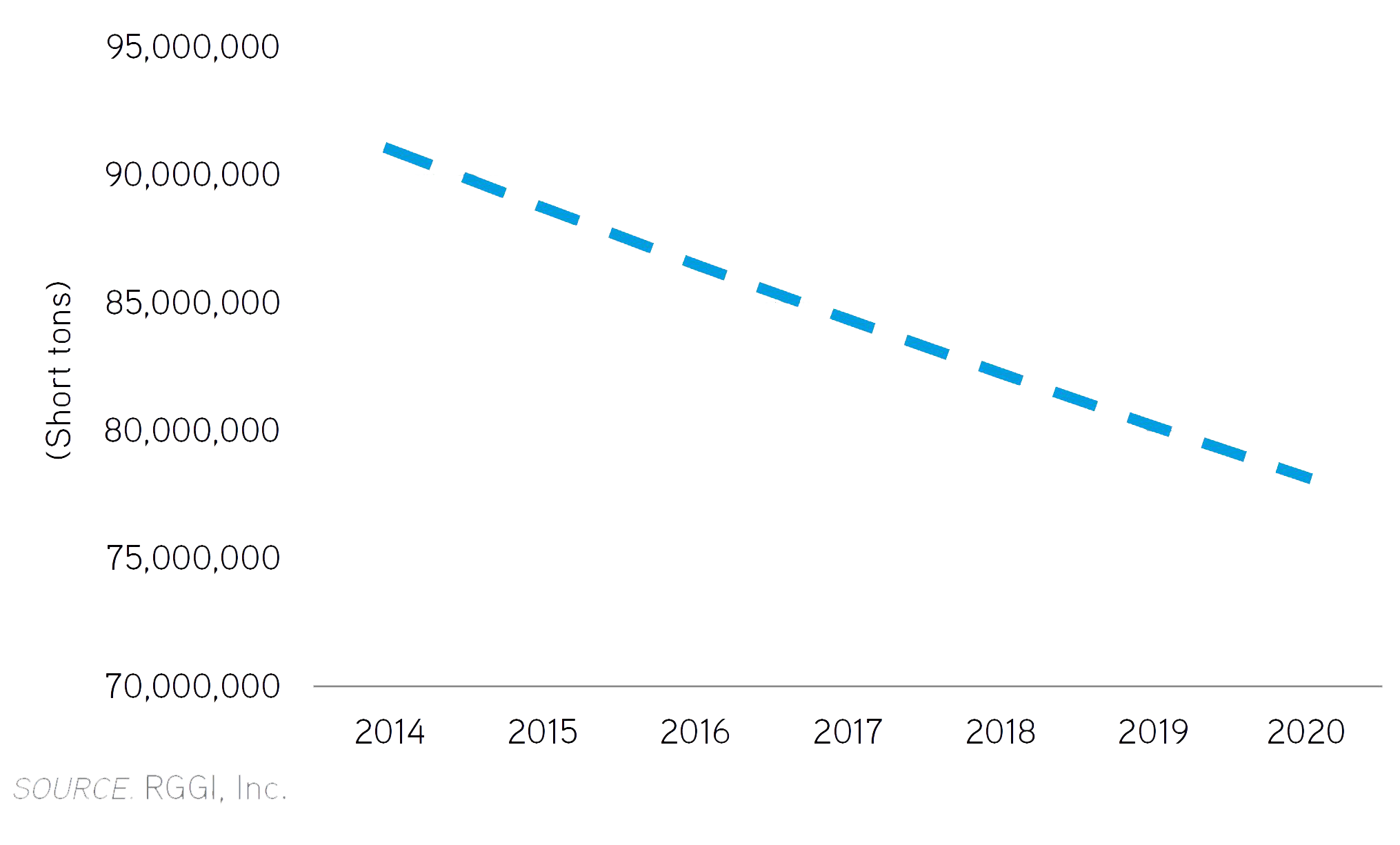 A key to RGGI’s success has been bipartisanship. Even during gubernatorial transitions from one political party to another, membership has been fairly stable (see Table 1). In only one case has a state exited the program when a new party took control. In 2011, New Jersey announced it was leaving the consortium by 2012. The new governor, Chris Christie, called the program “gimmicky” and “a failure.”[14] However, earlier this year, New Jersey[15] announced it was re-entering the Regional Greenhouse Gas Initiative and Virginia[16] was taking steps to join as well. So, RGGI continues to grow through multistate cooperation.

There are limitations to the program. States reliant on carbon-heavy sources of power have been resistant to join the initiative. For instance, Pennsylvania — ranked third highest in the nation in carbon emissions — has refused to join RGGI, even though states to the south, like Maryland, have. When Democrat Tom Wolf was elected governor of Pennsylvania, there was talk that the state would finally join the consortium. However, the strong opposition by the coal, oil, and gas industries has thus far kept the state out. More work needs to be done to figure out ways to incentivize carbon-reliant states to join.

Since the creation of RGGI, other states have adopted a cap-and-trade program, namely California[17] (its program has been up and running for more than two years). Moreover, other regional state consortiums have been created, like the Western Climate Initiative, though it still is not fully formed. 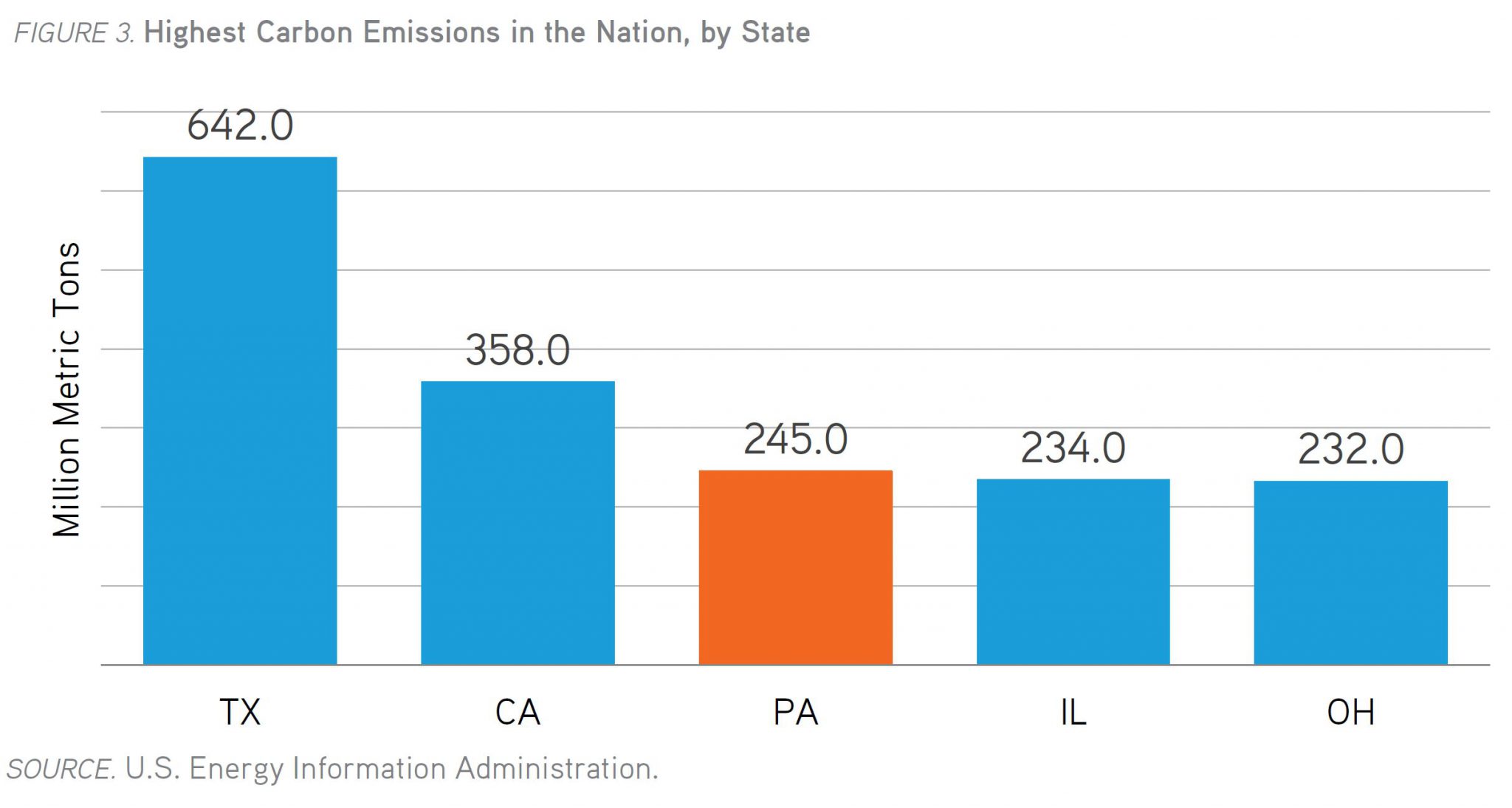 As states (and other government partners, such as cities) are moving to work cooperatively to combat climate change, higher education has a unique opportunity to effect significant change. It comes down to a willingness to foster more cooperation among the colleges and systems across the nation.

Why higher education? Not only are we the idea generators for fueling the clean technology economy, it’s also the sheer size of the sector that can leverage its collective power to reduce the nation’s carbon footprint.

Colleges and universities are some of the largest energy users in the country — spending nearly $14 billion annually on energy. In many cases, campuses are cities unto themselves. For example, the University of Buffalo’s student body population and employees make it larger than the population of six counties in New York.[18]

In response, colleges and universities across the nation have focused on becoming more energy efficient, as well as using cleaner sources of energy in order to reduce their carbon footprint. Many have joined coalitions, like the Second Nature network,[19] that include 600 campuses committed to fighting climate change. In New York, reducing the SUNY system’s carbon footprint has been a priority in the system’s strategic plan[20] and the new chancellor, Kristina Johnson, has made clean energy and reducing the carbon footprint a central mission of her tenure.[21] In addition, many schools, both public and private, are taking aggressive steps to become greener. For example, four New York State schools are in the top thirty “Largest Green Power Users” in the nation.

There are more than twenty-four million students and employees currently at our colleges and universities throughout the nation. If higher education was a state, it would be the third largest state in the nation, behind only California and Texas. It would be larger than states like New York and Florida.

Much is being done at colleges and universities, but they are often accomplished campus by campus — or system to system.

But what if higher education harnessed individual campus/system green energy activities and climate goals into mass collective action? It could make a profound difference.

Let me put the potential for scale in perspective. There are more than twenty-four million students and employees currently at our colleges and universities throughout the nation. If higher education was a state, it would be the third largest state in the nation, behind only California and Texas. It would be larger than states like New York and Florida.

Since the federal government has delegated authority, higher education could take a leadership role and follow models like the Northeast Regional Greenhouse Gas Initiative. Although colleges and universities aren’t states — and may not be able to do certain things states can do under RGGI, like a cap-and-trade system — they could join together through a formal process to memorialize a more binding unified agreement. In this case, RGGI is a good guide. Through an MOU, colleges and universities could establish one common program to reduce carbon emissions. Like RGGI, they then could establish an organization made up of faculty, staff, and other experts across the system to provide technical expertise and modeling to implement the program.

Success is limited to participation. Big coal and fossil fuel states, like Pennsylvania, have refused to join the RGGI program. But what if SUNY joined with Penn State, UMass, and other large systems under one joint program to lower carbon emissions? As large energy consumers, these systems of higher education could fill the void of state inaction. It could serve as a leadership model in response to federal inaction. And campuses seem inclined to so do. After eighty-six years of using coal, in 2016, Penn State converted to natural gas, a cleaner source of energy. The potential is there. If higher education worked together with a collective mission, goals, and rules, it could lead the way in combating global climate change.


An Energy Policy Roadmap for the States and Large Institutional Players

In the era of federal delegation on climate change, states are left to deal with climate change more aggressively. Getting states and large institutional players, like higher education, to cooperate in a collaborative manner will take effort, especially those states that produce the most CO2 emissions. But collaborative models, like RGGI, are a roadmap that states could follow.

When looking to develop models, states and large institutional players should incorporate the following:

While the Trump administration loudly announced it was going its own way on the Paris Climate Agreement and has changed the regulatory landscape to combat climate change, it has so far been countered with a resounding call for greater cooperation from states, cities, businesses, and other entities to continue under the agreement. Whether this coordinated effort will be permanently institutionalized remains to be seen, but the blueprint above could lead the way.

[7] “California’s 2030 Climate Commitment: Renewable Resources for Half of the State’s Electricity by 2030,” State of California Energy Commission, accessed April 17, 2018, https://www.arb.ca.gov/html/fact_sheets/2030_renewables.pdf

[17] Although RGGI faced industry opposition, lawsuits, and other attacks, it has not nearly been as contentious as California’s program. See Michael Hiltzik, “California’s cap-and-trade program has cut pollution. So why do critics keep calling it a failure?,” Los Angeles Times, (July 29, 2016. http://www.latimes.com/business/hiltzik/la-fi-hiltzik-captrade-20160728-snap-story.html

[18] The University at Buffalo, and it’s more than 36,000 students and employees, is larger than Seneca, Schoharie, Lewis, Yates, Schuyler, and Hamilton Counties