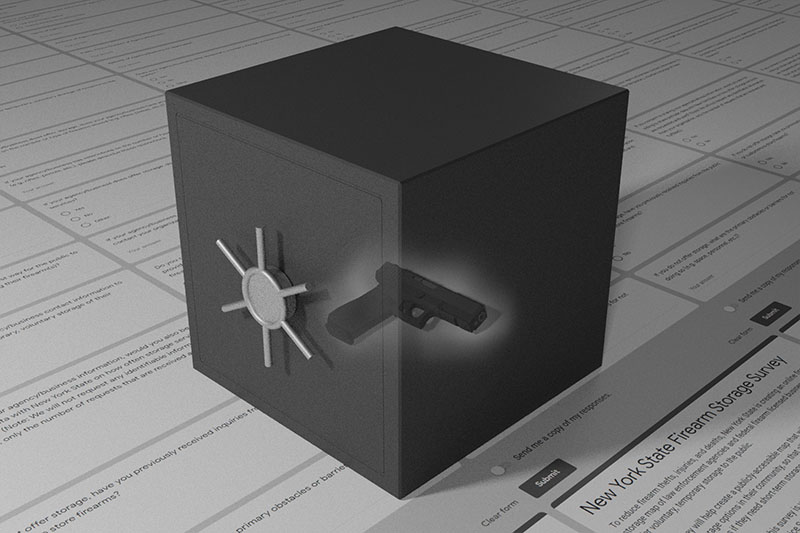 By Joseph Popcun and Julianna Caruso

In November, the Regional Gun Violence Research Consortium (RGVRC) at the Rockefeller Institute of Government launched the New York Firearm Storage Map—an interactive tool to provide New Yorkers with locations for temporary, voluntary firearm storage. This map identifies 188 local options in New York for individuals who are seeking out-of-home storage for their firearms. This map includes two types of locations: law enforcement agencies (LEAs), which include local police departments and sheriffs’ offices, and federal firearms licensed (FFL) businesses, which include gun sellers and shooting ranges. In this post, we review literature highlighting the role firearm storage can play in reducing gun violence and present findings from the survey used to construct the map.

The Importance of Gun Storage

Firearm storage can meaningfully reduce firearm thefts and fatalities, including accidental deaths and suicides. The need for safe storage options may arise when gun owners have small children living or visiting with them, they are traveling out of state, showing or selling their home, or they or a family member are in crisis or at risk of suicide. The National Shooting Sports Foundation (NSSF), the firearm industry trade association, recommends off-site storage as an effective way for gun owners to promote gun safety, avoid accidents, theft, and misuse that could result in tragedy.

Expanding safe firearm storage options could also result in reduction of youth suicide, as a 2019 study suggests that roughly one-third of these deaths could be prevented by promoting safer firearm storage practices.

According to data from Everytown for Gun Safety, a gun safety advocacy organization, there were at least 299 unintentional shootings by children so far in 2021, resulting in 125 deaths and 189 injuries nationally. In addition, firearm suicide is on the rise in the United States—particularly in the Western and Southern regions of the country—with a total of almost 24,000 deaths nationally compared to roughly 16,500 in 2000. Firearm suicides remain closely linked with firearm ownership and may continue to increase as a result of the COVID-19 pandemic, as recent research suggests that individuals who bought a firearm during the pandemic exhibited suicidal thoughts at a greater rate than those who did not. Expanding safe firearm storage options could also result in reduction of youth suicide, as a 2019 study suggests that roughly one-third of these deaths could be prevented by promoting safer firearm storage practices.

The data collected to create this report and inform a portion of the entries seen on the New York Firearm Storage Map has been gathered from a survey developed by the Rockefeller Institute of Government’s Regional Gun Violence Research Consortium, in consultation with the New York State Division of Criminal Justice Services and New York State Police. The survey was distributed to law enforcement agencies across New York and businesses located in the state of New York holding a federal firearms license, which allows private businesses to legally engage in the sale of firearms across the state and in other states. Responses were collected for a three-month period (November 2020 – February 2021). Submissions were reviewed to identify double entries and any incomplete contact information. In addition, the survey asked respondents about any restrictions they placed on gun storage services and obstacles that prevented them from offering services. Responses were classified into categories to better analyze the data and identify trends. More details on the survey and methodology can be found here.

The survey responses that indicated an LEA or FFL offered temporary firearm storage and were open to having their contact information publicly available were then added to the directory and included on the map. These responses were supplemented by additional outreach to law enforcement agencies conducted over telephone by the Regional Gun Violence Research Consortium in an effort to create a more comprehensive directory and map.

Out of 367 total survey respondents, 196 (53 percent) reported that they offered temporary, voluntary firearm storage to the public in some capacity. Of those 196 respondents, 176 (90 percent) indicated that they were comfortable sharing their contact information publicly so New Yorkers would be able to inquire about their service. A majority of organizations that indicated in the survey that they offered firearm storage to the public—110 of 176 (63 percent)—are FFLs.

Note: please see the survey methodology for more detailed descriptions of restriction categories. Six (6) respondents currently do not offer storage but indicated they would be willing to in the future.

Out of the 176 LEAs and FFLs open to sharing their information with the public, over a quarter respondents provided one or more restrictions for offering storage (Table 1).

The most frequently cited restriction categories were quantity of firearm, type of firearm, and residential status.

Notably, 37 out of 176 (21 percent) respondents offering public storage indicated that while they offered storage, they had never received a public inquiry about it. Twenty-seven out of 176 (15 percent) indicated that they had received a public inquiry; however, this may be based on incomplete survey data, as not every “Yes” respondent provided a response to this question regarding utilization.

Out of the 367 survey respondents, 165 (45 percent) reported that they did not currently offer storage and would not in the future. A slim majority of these respondents were law enforcement agencies or other government entities, rather than federal firearms licensed businesses.

Another interesting finding is the frequency of respondents citing a “Policy Decision” and “Beyond Scope of Duty” in the “No” answers (19 percent of respondents, combined). These respondents are categorized according to the language used to defend each organization’s decision not to offer firearm storage. Policy Decision, on one hand, was decided to be a conscious decision not to offer storage, because of the organization’s business model or wants (e.g., not wanting to store the firearms of others). Beyond Scope of Duty, on the other hand, was decided to be a decision based on the organization’s mission (e.g., being a firearm manufacturer as opposed to a retailer).

Notably, respondents not offering firearm storage included many FFLs with businesses that are only partially related, or wholly unrelated, to firearms. In fact, there were photographers and auctioneers, for example, who held the license to better serve their clients, as they offered firearm-adjacent services. Only a small proportion of the respondents’ “No” answers (4) simply did not have a protocol and did not indicate that they were interested in creating one.

This work generated the largest statewide directory of firearm storage locations to date and insights into the challenges LEAs and FFLs face in offering safe storage services. The voluntarily reported survey data has limitations. The compiled data may contain partial or skewed results. For instance, some respondents omitted answering some of the survey questions. Additional follow up work is required to create a more comprehensive directory. Upon completion of the survey, researchers called several law enforcement agencies that did not complete the survey in an effort to identify storage options in counties that did not have any listings. Continued effort will be required to identify additional storage providers and maintain the directory for the long term.

Safe storage options outside and within the home can prevent tragedies. To effectively reduce the frequency with which an at-risk adult or a child encounters a loaded firearm, New York should continue to support and expand temporary, voluntary firearm storage. To do so, the State may seek to address and remove the obstacles that hindered LEAs and FFLs from offering such storage in the first place. For example, space and personnel constraints were commonly identified as a barrier to entry for locations interested in offering storage. With sufficient resources, these businesses and law enforcement agencies may be incentivized to provide this service to the public, expanding the number of available locations across the state. Indeed, proximity to a storage location may be the deciding factor for a New Yorker seeking to remove firearms from their home.