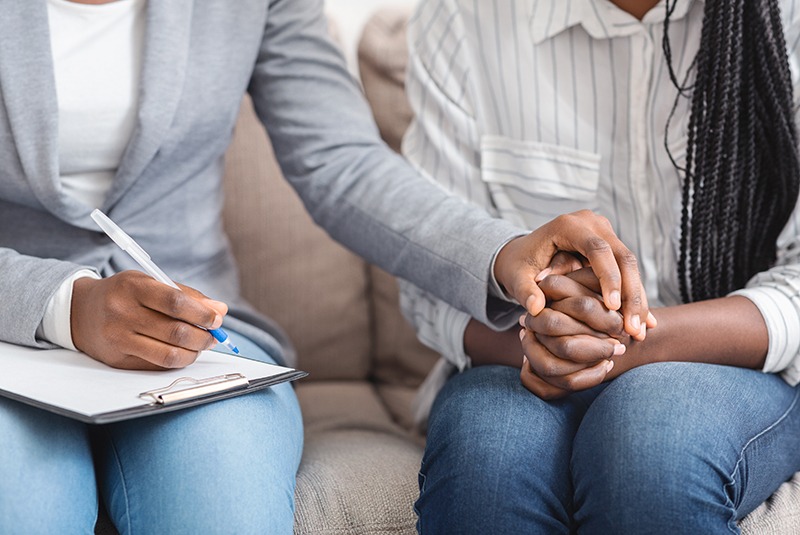 The author of this piece was a winner in the Rockefeller Institute of Government’s Future Leaders in Policy Competition. The competition challenged students from SUNY’s campuses to think about the policy implications of their research. They pitched policy proposals, based on their expertise, to New York State policymakers. The winners were invited to publish a blog based on their proposal.

In the US, LGBTQ+ individuals are more than twice as likely to have a mental health disorder in their lifetime and 2.5 times more likely to experience mental health issues, such as depression and anxiety, compared to heterosexual individuals. People of color (POC) who also identify as LGTBQ+ also have a reported history of discrimination, racism, and homophobia, making them more vulnerable to mental health challenges.

The fight for gaining access to affordable high-quality healthcare without the concern of discrimination has long been part of the LGBTQ+ movement and one of the areas that still falls short of equal access in America.

Identifying as LGBTQ+ is often linked to discrimination and stigma and as a result some may delay or forego necessary healthcare. LGTBQ+ youth of color (YOC) ages 13-24 are particularly vulnerable to suicide risks and adverse mental health issues due to mistrust of mental health providers and fear of embarrassment or discrimination.

In recent years, the State of New York has become more politically and socially aware of and responsive to the LGBTQ+ community. Policies have been put in place to protect these groups and create a more equitable environment. For example, the Marriage Equality Act, the law that made same sex marriage legal in New York, was passed and signed in June 2011. In 2019, the Gender Expression Non-Discrimination Act (GENDA) went into effect, preventing discrimination based on gender identity, expression, or transgender status. Subsequently, in March of 2020, the New York State Department of Health’s Bureau of Vital Records authorized transgender minors to change the sex on their birth certificate.

While efforts have been made to understand and address LGBTQ+-related issues, significant health disparities in medical and mental health services persist in New York State and the country. These disparities are even starker for LGBTQ+ POC, who experience burdens at the intersection of multiple marginalized identities. The fight for gaining access to affordable high-quality healthcare without the concern of discrimination has long been part of the LGBTQ+ movement and one of the areas that still falls short of equal access in America. Scholars believe that this impacts predominantly minority and gay communities.

In this piece, I use a framework of intersectionality and minority stress to address the unique healthcare challenges faced by LGTBQ+ POC, including the prevalence of comorbidities (when more than one condition, such as depression and anxiety, are present simultaneously) and the reality of having to deal with homophobia and racism as a queer person of color. I explore the history of underrepresentation and mistreatment of LGBTQ+ POC individuals in the mental health profession. I then review policies that could help address the challenges faced by underrepresented individuals seeking healthcare.

An essential part of LGBTQ+ advocacy was the fight to remove homosexuality as a mental illness from the Diagnostic and Statistical Manual of Mental Disorders (DSM) and improve mental healthcare for LGBTQ+ individuals. Until 1973, the American Psychiatric Association (APA) classified homosexuality as a mental illness in the second edition of the DSM. This classification relied on theories that homosexuality was a pathology and “deviation” from “normal” heterosexual development and stigmatized LGBTQ+ people by diagnosing them with mental illness. Shortly after the Stonewall riots, several gay activists called out the blatant homophobia in the DSM, citing the medical profession’s theories as a contributor to anti-homosexual social stigma. Activists disrupted the 1970 and 1971 annual meetings of the APA to bring attention to homophobia in the medical community.

Transgender individuals have also faced limits in mental healthcare. Although “transgenderism” is no longer labeled as a mental disorder in the DSM, “gender dysphoria” is still classified as an official diagnosis, though many see this as an improvement from the earlier diagnosis of “gender identity disorder” (GID). Moreover, the DSM 5th edition (2013) continues to classify “transvestic disorder” as a diagnosable condition, demonstrating the persistence of both transphobia and sexism in the mental health profession. Many advocates call for a full removal of these terms from the DSM believing that viewing transgender identities, or non-gender conforming expression as a “disease” leads to discrimination and abuse. The label of “mentally ill” can be used to invalidate individual’s lived experience and has been used to justify discrimination in hiring, child custody cases, and housing.

The National LGBTQ+ Task Force states that “transvestic disorder” is blatantly sexist in that it enforces binary gender roles and makes what would otherwise be a nonspecified “fetish”[1] into a particular type of “fetish” (one that gets its own disorder category) because it involves cross-gender behavior such as when those assigned male-at-birth wear clothes associated with women. To elaborate on this statement, the definition of transvestic disorder perpetuates the harmful stereotype that trans and gender nonconforming individuals dress based on their comfortability solely for sexual gratification.

Individuals who are Black may also be less likely to receive a response when attempting to reach out to mental health professionals and facilities. One study found that Black middle-class help seekers were less likely to be able to schedule an appointment with a psychotherapist than white middle-class help seekers. People of color face challenges in getting the mental health treatment they require.

AIDS is a stark example of how institutional racism and anti-LGBTQ+ sentiment in the medical profession contributed to a deadly health crisis. At the peak of the AIDS epidemic in 1995, the mortality rate was 16.1 deaths per 100,000. The mortality rate for the Black population was 54.0 per 100,000, 4.7 times that of the white population. Scholars have pointed out that: “Institutionalized racism affects general healthcare as well as acquired immunodeficiency syndrome (AIDS) health intervention and services in minority communities. The overrepresentation of minorities in various disease categories, including AIDS, is partially related to racism. The national response to the AIDS epidemic in minority communities has been slow, showing an insensitivity to ethnic diversity in prevention efforts and AIDS health services.” One study exploring the HIV care delivery system in San Francisco found that medical treatment was not equally distributed to all neighborhoods. The authors found that some of the difference in the AIDS mortality rate between POC and white patients was driven by POC patients residing in lower socioeconomic neighborhoods. People who lived in neighborhoods with lower socioeconomic indicators had higher mortality rates than those in higher socioeconomic areas, but the difference cannot fully explain the difference in mortality rates between white people and POC.

Intersectionality is a term initially coined by Black scholar Kimberlé Williams Crenshaw. She described it as “a simultaneous look at various forms of oppression.” LGBTQ+ POC have a disproportionate mental and physical health burden due to the intersectional experiences they face. For example, a woman of color could face discrimination based on both her gender and race. The same logic applies to a queer person of color. They are subjected to multiple forms of oppression based on their race, gender identity, and sexual orientation. Such intersectional burdens can contribute to mental deterioration, substance abuse, and suicidal ideation.

Since the mental health field is predominantly white, most service providers don’t already share the lived experience that Black people and POC might express.

There continue to be challenges in addressing intersectionality in research and policy, especially related to healthcare. Intersectionality allows us to view health issues beyond the structural classifications of sex and gender, and through race and class simultaneously. It can be applied when looking at transmission risks of HIV/AIDS amongst LGBTQ+ persons, for example. Since the mental health field is predominantly white, most service providers don’t already share the lived experience that Black people and POC might express. When addressing mental healthcare for this population, providers should be aware of these intersectional experiences and burdens in order to provide the most culturally appropriate care.

Minority stress is a term that is often used to describe disadvantaged groups of people who are placed into a hostile and stressful social environment that acts as the source for developing mental health issues. These populations rely heavily on individual-based resilience—or the ability to “withstand, adapt to, and recover from stress and adversity and maintain or return to a state of mental health wellbeing by using effective coping strategies.” Meyer describes resilience as “an essential part of minority stress” and noted that heavily relying on individual based-resilience in the context of multiple and systemic stressors may hinder mental well-being.

All of these experiences and factors contribute to minority stress. These include experiences related to oppression, white privilege, and racial discrimination. Kertzner and Meyer note that “lesbian, gay, and bisexual (LGB) adults have greater psychiatric morbidity than their heterosexual counterparts, and that this excess morbidity is related to exposure to stressors, such as prejudice, discrimination, and violence.” What this says about our system is that there is a need to address the availability and adequacy of mental health support for LGBTQ+ POC, particularly those at the intersection of still further marginalized identities and experiences, such as those who reside in lower- and middle-socioeconomic communities.

The staggering rates of suicide and attempted suicide in the LGBTQ+ community for POC is a gut-wrenching reality that requires more consideration. A number of research studies have surveyed segments of the LGBTQ+ community to better understand the mental health challenges they face.

To address the lack of research on the intersectional experiences of LGBTQ+ POC, I propose a series of actions and policies to reach out to these disadvantaged groups effectively. Researchers have found LGBTQ+ POC are underrepresented and experience trauma based on their race, gender identity, sexuality, and socioeconomic status. Despite the evidence of the problem, there have been few proposed solutions. Changes to political and professional leadership to consider include:

A state task force should address and make recommendations on the following:

The Stonewall Riots coalesced a disparate movement and paved the way for many LGBTQ+ groups in the United States to advocate for themselves and their communities. Other civil rights based movements, such as Black Lives Matter (BLM), have also recognized the importance of intersectionality and integrate LGBTQ+ concerns with slogans such as “Black Trans Lives Matter” into their advocacy. In the modern day, we think of ourselves as diverse, but there is a lot left to do to support the mental health and wellness needs of individuals from these backgrounds. While there have been substantial improvements, we are not there yet.

We are far from reaching equality, let alone witnessing a diverse representation of healthcare practitioners that reflect the makeup of their patients. My policy recommendations for New York State will help ensure that the personal needs of those in the LGBTQ+ minority communities are being met by mental healthcare providers who are trained and willing to understand their intersectional experiences. The first step to addressing these issues is becoming more aware and making conscious efforts to actively support learning and change.

Gabriella Mayers is a recent sociology graduate from Stony Brook University. Gabby has dedicated the majority of their undergraduate years presenting at research conferences addressing racial and social issues. Gabby has plans to pursue a masters in public health and continue to address health disparities through research and scholarship.

[1] In this context fetish refers to the focus of fetishistic disorder as defined in the DSM-5.