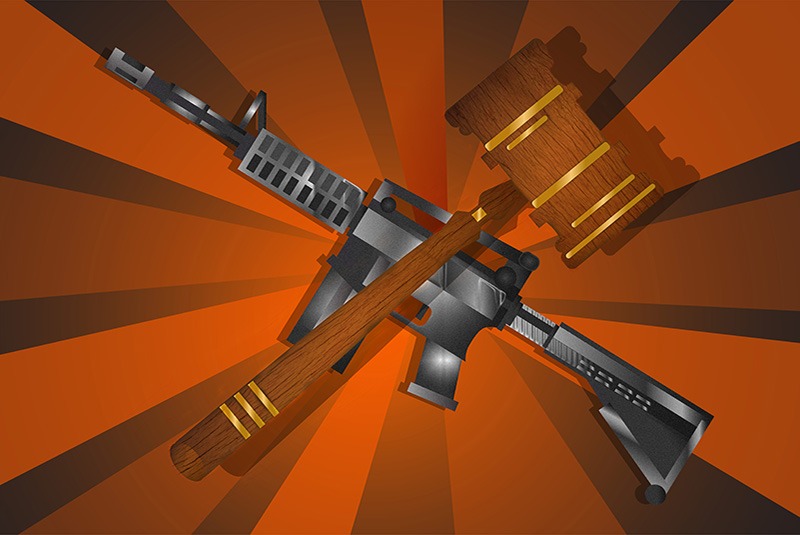 A seven-year legal struggle ended February 15 with the announcement of a landmark $73 million settlement between the families of nine of those killed at the Sandy Hook Elementary School in Newtown, Connecticut, in 2012 and the Remington Arms company. While a settlement might seem an ambiguous or premature end to this protracted legal saga, it is first important to understand its four key elements, and then the case’s larger context and consequences.

First, Remington, maker of the Bushmaster XM15-E2S assault weapon used by the perpetrator to murder 26 people, including 20 first graders, admitted no liability. Second, the settlement dollar amount is significant both for its size—the largest such payout from a gun company ever—and for the fact that it represented the maximum possible payout. In that respect, the penalty speaks for itself. Third, and perhaps most significant, the agreement requires the public disclosure of thousands of pages of internal Remington documents. Document disclosure was so important to the families that, as their lawyer said, “No documents, no deal.” Fourth, had the case gone to trial, the likelihood of a favorable verdict for the families was far from certain, and had it been favorable, the prospect of it being overturned on appeal was very real. For this reason, the plaintiffs may well have achieved the optimal outcome in the settlement.

The Construction and Breaching of the Gun Industry Firewall

In the 1980s and 1990s, sporadic lawsuits had been filed against gun manufacturers seeking damages to compensate gun-crime victims. The legal basis for such actions is the tort law principle that individuals or other entities can be held responsible for selling products that, although legal, needlessly or willfully expose others to great risk of harm. In 1998, for example, tobacco companies agreed to pay out over $200 billion across 25 years, in part for having marketed their products to children. Like guns, tobacco products are perfectly legal to sell to adults. That litigation was indeed a blueprint for subsequent legal actions against the gun industry.

In the 1999 case Hamilton v. Accu-Tek, a Brooklyn jury awarded monetary damages to families of gun violence victims based on the claim that several gun manufacturers, whose guns had been used in the shootings, had been negligent in their marketing and distribution practices, such that the companies had reason to believe that their guns would be obtained and used by criminals. Although the verdict was eventually overturned on appeal, it encouraged a spate of new lawsuits, a development that alarmed the gun industry and the National Rifle Association (NRA).

This led the NRA to set enactment of federal liability protection for the gun industry as its top legislative priority. In a major NRA victory, Congress enacted the Protection of Lawful Commerce in Arms Act (PLCAA) in 2005. This unique protective law all but barred civil suits against the gun industry. It did, however, provide for a few narrow exceptions, including for sales and marketing practices that violate federal or state law.

In 1973, Connecticut enacted a law (subsequently amended a number of times), the Unfair Trade Practices Act, that allowed legal action against companies that engage in irresponsible marketing of their products. According to the Giffords Center, a gun safety group, it applied to this case by “promoting unlawful military use of the rifle by civilians.” (New York enacted a similar law in 2021.) Prospective buyers of weapons like Remington’s Bushmaster AR-15-type rifle—the weapon used at Sandy Hook—were urged to “Consider your man card reissued,” along with similar militaristic marketing that the plaintiffs felt had special appeal to troubled young men like the Sandy Hook perpetrator. Wording that appeared on the Bushmaster website, taken down immediately after Sandy Hook, said “In a world of rapidly depleting testosterone, the Bushmaster Man Card declares and confirms that you are a man’s man.” Plaintiff filings also said that Bushmaster marketing information “continued to exploit the fantasy of an all-conquering lone gunman, proclaiming: ‘Forces of opposition, bow down. You are single-handedly outnumbered.’” Bushmaster ads were also inserted in violent video games, which are often played by young males. Former gun industry insider Ryan Busse has decried the industry’s shift toward such weapons and the militaristic marketing that has accompanied them. Problems attributed to allegations of irresponsible gun marketing are not limited to these examples.

In the aftermath of the Sandy Hook shooting, the Connecticut law provided the opening for what was generally considered a long-shot legal action.

Other companies have become even more aggressive in marketing guns specifically to younger audiences. A gun company called WEE1 Tactical, a subsidiary of Schmid Tool and Engineering, introduced a new smaller and lighter-weight assault rifle “advertised as a kids’ version of the AR-15” at the nation’s largest gun trade show in early 2022. According to the company’s web site, its purpose is to “develop a line of shooting platforms that will safely help adults introduce children to the shooting sports.” The company’s landing page features a graphic of children’s skulls with crossbones and pacifiers in their mouths: boys on one side with mohawk haircuts and girls on the opposing side with pigtails tied with pink bows. All the skulls have gun sight crosshairs in the right eye socket.

In the aftermath of the Sandy Hook shooting, the Connecticut law provided the opening for what was generally considered a long-shot legal action. Remington challenged the suit as a plain violation of the PLCAA but, in 2019, Connecticut’s high court ruled that it could proceed (the US Supreme Court declined to interfere), opening the door to document discovery and the eventual settlement.

Is the Focus on Assault Weapons Misplaced?

First, assault weapons are disproportionately used in mass shootings, having been used in over a third of such events (though handguns are used most frequently). Second, assault weapons are more lethal than other firearms, both because of their firing capabilities (the speed and action of the bullets after they leave the barrel) and ability to receive large-capacity ammunition magazines (used in a majority of mass shootings from 2009-21) capable of holding as many as 100 rounds. And third, assault weapons have become the de facto symbol of, and weapon of choice for, the more radical, aggressive, and heavily-armed extremist groups that have appeared in numerous demonstrations held around the country in the last few years.

The Consequences of the Settlement

The circumstances that converged to produce the settlement are by no means common, but are likely enough that there will surely be other cases brought in the future in addition to existing litigation. Even before the Remington settlement, two Parkland families filed suit in 2018 against both the gun manufacturer and seller of the assault weapon used by the Parkland high school shooter that year to kill 17.

Without question, the precedent of this settlement will prompt gun manufacturers to reassess their gun marketing strategies, fearing not just adverse publicity and possible large payouts, but internal document revelations. The “no documents, no deal” declaration by the lawyer representing the Sandy Hook families underscores what they believe can be the blowback for the gun industry from such revelations. And it is not beyond imagining that some companies may even reexamine the question of whether they will continue to sell assault weapons. (A few gun companies, such as Kimber arms, have consciously avoided the assault weapons market.) Some companies have already moved away from assault weapons and gun sales more generally. After the Parkland school massacre in 2018, nationwide sporting goods retailer Dick’s Sporting Goods announced that it would stop selling assault weapons (it has since stopped selling guns entirely). Walmart earlier announced the same, and Kroger stopped selling guns and ammunition at its Fred Meyer stores. Still, assault weapons’ profitability, tied in part to militaristic marketing, retains a strong allure in the gun world.

Without question, the precedent of this settlement will prompt gun manufacturers to reassess their gun marketing strategies, fearing not just adverse publicity and possible large payouts, but internal document revelations.

An additional consequence of the settlement is that it may encourage a few other states to enact laws similar to Connecticut’s Unfair Trademark Practices Act. California and New Jersey are said to be moving ahead along these lines. On the other hand, most states have unfair competition laws, and it is not beyond imagining that personal injury lawyers could persuasively argue that gun advertising could be connected to mass shooting events. The NRA will surely seek to strengthen the federal PLCAA, though the country’s current political polarization and relative paralysis make national gun policy change on either side of the gun debate unlikely for the foreseeable future.

This leads to a final question: what of Remington? It is no longer a player. Contrary to initial impressions, the company’s financial problems and ultimate dissolution predate, and were mostly unrelated to, Sandy Hook and the lawsuit, but instead to the company’s purchase by a private equity firm, Cerberus, in 2007. That deal set in motion a series of decisions that resulted in quick profits for the investors but greater risk for Remington that eventually led to the company’s two bankruptcy filings, the second of which came in 2020, and the selling off of its assets to other companies.

Looking ahead, gun companies will surely recalibrate their marketing strategies in order to minimize their vulnerability to future lawsuits. That notwithstanding, however, this settlement offers a template for future litigation.

Robert J. Spitzer is distinguished service professor of political science emeritus at SUNY Cortland. He is the author of six books on gun policy, including Guns Across America: Reconciling Gun Rules and Rights (2015) and The Politics of Gun Control (8th ed., 2021). His newest book, The Gun Dilemma, will be published in October by Oxford University Press. He is also a member of the Regional Gun Violence Research Consortium. The views expressed here are solely those of the author.