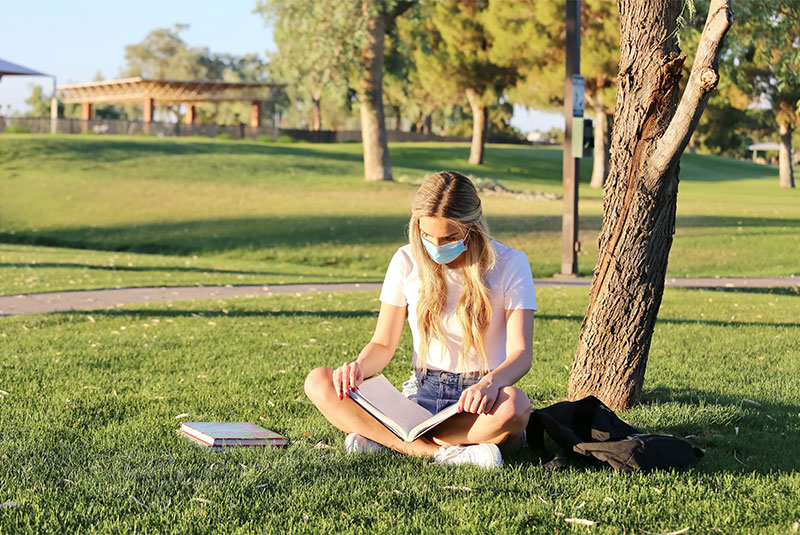 The 2020 census has faced a number of unique challenges this year. On August 3, 2020, the U.S. Census Bureau announced that the field data collection period for the census would be shortened. Phone, mail, and online response collection, as well as all door-knocking efforts, would now end on September 30, a month earlier than originally scheduled. The Census Bureau sited the change as necessary to “permit the commencement of data processing,” a move that many state and local leaders felt was politically motivated. The COVID-19 public health emergency has already forced the Census Bureau to adjust operations for in-person activities to comply with social distancing protocols and the use of personal protective equipment (PPE). While the COVID-19 pandemic brings additional hurdles to achieving a complete and accurate 2020 count for all groups, college students, a historically undercounted population may be disproportionately affected this year due to the mass migration of students that occurred as colleges and universities began closing.

In mid-March, colleges and universities heeded COVID-19 public health advisories and directed students to return home, in the process transitioning to distance education. Regardless of their living arrangements, college students left campuses in droves to rejoin family. Even before the unprecedented mid-semester migration, the 18-29 year old bloc is the least likely of all age groups to respond to the census. An October 2019 survey found that 34 percent of young adults may not participate.

The decennial census apportions federal representation in the U.S. House of Representatives and helps distribute billions of dollars in federal aid, so the importance of a fair and accurate count for states and localities cannot be overstated. A recent report suggests census-derived data guides as much as $1.5 trillion to 316 federal programs. The census drives funding to federal programs used by large swaths of the country on a daily basis including Medicaid, Medicare Part B, infrastructure funding, student loans, Section 8 Housing Vouchers, Supplemental Nutrition Assistance Program (SNAP), and Temporary Assistance for Needy Families (TANF), to name a few. An undercount in the census means less money and fewer representatives for the state and locality in which this undercount manifested. For college towns where students departed mid-semester, this could mean a decade long impact.

Even more importantly, the count of college students affects non-students in the community. As Congressman Paul Tonko highlighted during a forum: A school may have 100 students, but if only 75 are counted then the school and surrounding community must support and serve 100 students with only the funding for the 75 students counted. In other words, all members of a community have both a self-interested reason to be counted and a neighborly reason to be counted.

There are three distinct groups of college students that interact with the census process in very different ways: on-campus residents, commuters living with family, and student renters living off-campus. Under usual circumstances, on-campus residents are counted using Group Quarters enumeration. This process is used for counting people who reside in college dormitories, correctional facilities, nursing facilities, military barracks, and all other facilities owned or managed by a third party. For college dormitories, an administrator on the campus sends data to the Census Bureau for all students in university-owned housing. Students living with family or renting off-campus housing receive their census questionnaire by mail, and complete it by mail, phone, or for the first time this year online during the self-response phase. Students living at home may have a parent or head of household fill out the questionnaire, while those living in off-campus housing have to complete it in conjunction with others living at the rental residence.

Census guidance for counting college students has changed over the years, something that complicates the count of all three groups, even before the added obstacles of 2020. From 1880 to 1940, instructions suggested that students be counted at the parental address, not the college address. It was not until the 1950 census that instructions stated students be counted at their “usual residence,” which would be at college. As a result, there was a possibility that students would be double counted by their parents and their campus. This problem may have been magnified by the COVID-19 public health emergency when college students normally on campus in April found themselves back at home when household surveys first arrived. Though the Census Bureau has technology to control for duplications, a small subset of the population will be over counted.

The COVID-19 public health emergency and shortened data collection period made counting each of these groups even more difficult than it already was. For on-campus residents, the group quarters enumeration process has been limited to e-response only, meaning campuses that elected to host in-person visits from Census Bureau officials to confirm their group quarters count no longer have that option. Students living with family are facing the same challenges as other households including less time to fill out their questionnaire, an uncertain number of family members residing at home, and less comprehensive follow-ups. However, the students who live in off-campus housing are part of a historically undercounted population and face greater challenges in being counted accurately.

The mid-semester migration most profoundly impacts student renters who are the group solely responsible for filling out their own questionnaire. Many student renters left their rental properties in favor of rejoining family elsewhere, separating themselves from the residence where they would traditionally have responded to the census. Thus, the likelihood of accurately counting student renters dropped significantly. Mail reminders to fill out the census were now being sent to vacated residences. In-person enumerators would encounter difficulty tracking them down. College towns with higher proportions of student renters may suffer the largest undercount.

Student Renters and other Undercounted Populations

The decennial census count happens in two waves. The first wave, briefly discussed above, is self-response. In 2020, households received a letter in March directing them to complete the census at a website or phone number, or else they would be sent a full questionnaire by mail. During those three or four months of self-response, non-responsive households received reminder postcards. The second phase is Nonresponse Followup (NRFU) to collect information from households that did not self-respond. This is when most of the door-knocking enumeration occurs.

A number of communities are more likely to be inaccurately counted. Historically undercounted populations include renters, young children, people of color, immigrants, single parents, people in poverty and people with limited English proficiency. These populations tend to have low self-response rates, and as a result must be enumerated using NRFU, a less accurate and more costly method of counting. During NRFU it can be particularly difficult to get an accurate count in communities with high non-response rates because of housing instability and a distrust of government officials. There are a limited number of enumerators and limited time for follow-up, so the fewer self-responses in a community, the more work needed during NRFU.

Estimates for the undercount of Black and Hispanic populations were at 2.5 percent (1.3 million people) and 1.8 percent (1.1 million people) respectively. In January 2017, the Census Bureau compiled an exhaustive analysis on the longstanding miscount of young children in the decennial censuses, where they found the net undercount for children under five rose from 1.4 percent in 1980 to 4.6 percent in 2010. These groups may be undercounted because of housing instability, residual fears from the possible inclusion of a citizenship question, or a lack of outreach or inadequate training on how to properly fill out the questionnaire.

In the lead-up to the 2020 census, states with large concentrations of these undercounted populations, like New York, prepared to try to minimize yet another undercount.

In the 2010 census, New York’s self-response rate was 75.8 percent statewide, one of the lowest in the nation. According to 2010 data, 36 percent of the population in New York —roughly 7 million people—live in a hard-to-count community. A hard-to-count community is any census tract that had a self-response rate of 73 percent or less, as outlined by the CUNY Mapping Service at the Center for Urban Research. According to the Rockefeller Institute’s At-Risk Community Index, 428 of the state’s 500 lowest-responding census tracts (86 percent) are in New York City. New York City leads all other regions of the state in terms of the concentration of 8 out of 10 at-risk populations analyzed by the NYS Complete Count Commission – these include both historically undercounted populations and populations who pose undercount potential with the switch to online questionnaire responses.

Pre-pandemic miscount predictions for New York suggest that children under five could be undercounted by 6.7 percent, while Black and Hispanic residents could be undercounted by 3.9 percent and 3.6 percent respectively. Alone, these troubling trends kept community-based complete count committees, neighborhood associations, and the state government firmly focused on 2020 census preparation and execution. However, the looming COVID-19 public health emergency would bring new challenges to the counting process that would further jeopardize an accurate count.

The Rockefeller Institute’s At-Risk Community Index helps to both identify hard-to-count communities and prescribe potential reasons for their undercount. To do this, the index attributes scores to 500 census tracts in New York that had the lowest self-response rates in 2010. The higher the concentration of an undercounted population, the higher the score for each census tract and the greater the likelihood of an undercount in 2020.

Several communities in the state had observably high concentrations of renters near college campuses. The following tracts scored 5 out of 5 in percent of renter-occupied households, the highest possible score:

Census tract 43.02 in Syracuse, NY, a neighborhood commonly referred to as “University Hill,” situated between Syracuse University and SUNY College of Environmental Science & Forestry, is comprised of 98 percent renter-occupied households, most likely a majority of which are students. In 2010, this tract’s final self-response rate was 51.2 percent, far below the state’s median of 66.2 percent. For 2020 to date the self-response rate is only 20.5 percent, a profound decrease. The neighboring tract 34 is 90 percent renter-occupied households and has similarly low response rates—51.3 percent in 2010 and 24.9 percent in 2020.

Another at risk community census tract, 2.01, in Ithaca, NY is a neighborhood called “Collegetown” located near Cornell University where households are 97 percent renter-occupied. The current 2020 response rate (23.8 percent) trails the 2010 self-response rate by almost 30 points (52.2 percent). Like those in Syracuse, this tract in Ithaca is suffering from the pandemic-induced outmigration of student renters, one of the likely factors contributing to low self-response.

Challenges both old and new threaten to stifle census responses, specifically among off-campus student renters. With some college students returning to school this fall, the possibility remains that last-minute responses will trickle in before September 30th, but there is no guarantee. Currently, colleges are under no obligation to help students fill out the census questionnaire. A coordinated approach to reach this population is necessary to ensure that states and communities that typically have a large number of student renters receive their fair share. Without one, college-dense states like New York could be in trouble.

Nicholas Simons is project coordinator at the Rockefeller Institute of Government.