Behind the Fiscal Curtain: Forgotten Lessons from the 1970s NYC Fiscal Crisis 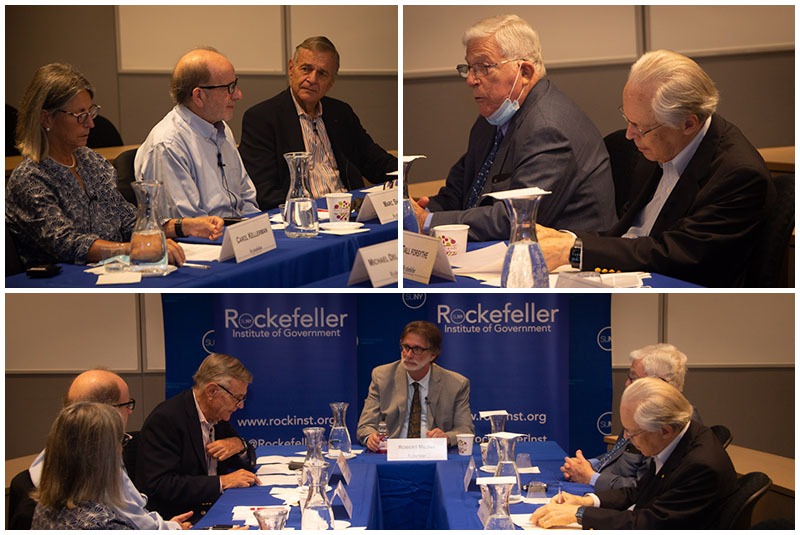 By Robert Megna and Laura Schultz

New York State has reached an inflection point. The COVID-19 public health crisis and associated economic fallout has illuminated structural challenges in the state. At the same time, the state’s governor and the mayor of New York City have been in their leadership roles for, collectively, less than a year. These new leaders will oversee the rebuilding and reimagining of public infrastructure and economic systems in the state with the goal of preserving the long term fiscal health of the State.

To get a better sense of the challenges the state and its leadership face, we revisited how New York City and the State addressed the Fiscal Crisis of 1975. In late September 2021, we invited leaders who navigated the crisis to discuss the immediate response to the crisis, the longer-term impacts of the decisions made at the time, and the characteristics effective leaders demonstrate when managing a crisis.

Panelists (roles listed below were those at the time of the fiscal crisis):

Starting in 1961, New York City was running annual current account deficits; the City’s revenues could not fund their current expenditures and debt payments. By 1974, in the midst of the second recession of the decade, the annual deficit had reach $487 million. The City maintained spending and services by borrowing to cover these operating expenditures. In 1974, New York City borrowed $2.2 billion to offset deficits and finance other capital projects. In the same year, the City’s outstanding debt has reached $13.5 billion.

In 1975, the banks reviewed the City’s revenue projections and decided they would no longer underwrite the notes and bonds of New York City. The City could no longer borrow money to operate and by April of 1975, New York City ran out of money. City leaders turned to the federal government and the State looking for the funds required to avoid bankruptcy. Eventually, Governor Hugh Carey agreed to advance the City funds from the State in exchange for the City turning financial oversight to the State. The outcome was the creation of the Municipal Assistance Corporation (MAC). The MAC was authorized to sell bonds to meet the City’s borrowing needs.

One of the key contributors to New York City’s fiscal crisis was inadequate oversight of the City’s finances. In addition to the creation of the MAC, the New York State Legislature enacted the Financial Emergency Act (the Act) in the fall of 1975. The Act implemented several measures to prevent future fiscal problems. The City was required to budget in accordance with generally accepted accounting principles. As part of the annual budgeting process the City was required to submit a budget and a four-year financial plan. The plans include forecasts of revenues and expenditures and regular comparisons between actual and forecasted values. As Dall Forsythe noted, “these good practices help alleviate the financial risks that cities face. Such planning practices are critical for dealing with economic realities such as the ups and downs of the business cycle and their impact on economically sensitive revenues. The City has a lot of economically sensitive revenues—now much more than it did before the fiscal crisis.”

I think the most significant thing that the MAC statute contained was the provision that the City had to budget in accordance with Generally Accepted Accounting Principles (GAAP Accounting).

The plans are submitted annually to the New York State Financial Control Board (FCB). Financial statements are audited by outside public accountants and published. The FCB was responsible for reviewing and providing oversight of New York’s financial management, and, initially, all plans, modifications, and lending were subject to FCB approval.

The crisis necessitated cuts in the programs and services offered by the city government. Peter Goldmark recalled the process of making those difficult decisions, however, Carol Kellermen did note that the FCB, having authority over the City’s spending, took political pressure off of mayoral administrations when popular programs needed to be downsized.

The goal was to make sure the necessary cuts did not fall on individual users or people, but fell on the institutions. As long as agencies met the macro cuts, they had the flexibility to decide exactly how to work it out on the ground level. This minimized the number of people who were fired. The measures implemented in 1975 held off bankruptcy. The City achieved a balanced budget in three years (rather than the four required) and capital markets reopened to the City to finance capital projects.

The FCB’s role transitioned from approval to review in 1986. Now the FCB reviews the financial plan quarterly and must be notified in the event of a change in the plan. The FCB and the Financial Information Services Agency now play a critical role in enabling transparency surrounding the City’s fiscal health.

Looking back at it, I think New York City did really a very good job of working its way out of the problems that it was in and rebuilding its capacity for financial management.

‘Existential’ has been used to describe the fiscal crisis facing the Metropolitan Transit Authority (MTA). In its July Financial Plan, the MTA forecasted cash deficits through 2025 totaling $16.3 billion. The $10.5 billion in federal aid expected will close the bulk of the deficit with the remainder expected to be offset through fare and toll increases, deficit financing, and service reductions.

The MTA finds itself in a precarious position. A year-and-a-half after the start of the pandemic, ridership has not recovered. Weekday subway ridership is 47 percent below where it was pre-pandemic; bus ridership is down 38 percent and commuter rail lines are down 51 percent. Bridge and tunnel traffic was down an average of 3 percent on a week day. There is still great uncertainty about when and if usage will ever reach pre-pandemic levels.

Even before the pandemic, there were concerns about declines in MTA service. In June 2017, after years of complaints about unreliable trains, malfunctions, and a train derailment, Governor Cuomo declared a State of Emergency and pledged $1 billion in improvements.

While the federal aid is providing a bit of a runway in the coming months, now is the time to ask, “Do we have the right system for what we need moving forward?” In January 2020, the MTA approved a $54.8 billion capital plan that would invest in the New York City metro region’s subways, buses, railroads, bridges and tunnels. With new leadership at the state and city levels and new usage patterns in the post-COVID era, it is reasonable to ask if all elements of the extensive plan are still appropriate or if alternative investments would put the MTA in a better fiscal position in the future. It is also important to reconsider how public transit is funded in New York with a transition toward congestion pricing.

The fiscal health of New York State and City are linked, and the new governor and mayor will have to work together to address significant challenges. Currently, two thirds of the City’s budget is dedicated to health, education, and social services, all of which are regulated by the State. Three challenges the panelists identified as facing the City and State are: location decisions, federal tax structures, and decarbonization.

All of these talks and restructuring are going to happen with a new governor and a new mayor. They are going to have to make sure that they keep an open mind towards understanding and working towards the other.

Overnight, COVID-19 reshaped our major cities as the locational ties between employment and residence were frayed or severed and remote work became the norm for many professionals. In the immediate aftermath, cities saw drops in sales, hotel occupancy, and business tax revenues. While some of the workforce has returned to downtowns, others have made a permanent shift to remote work. It will be years before we understand the long-term effects of these changes, but many cities are rethinking the value propositions they offer to residents and businesses.

Shifts in federal, state, and city tax structures may also contribute to New York’s ability to attract residents. Prior to COVID-19, over 17 percent (2019) of New York’s personal income tax revenues were generated by residents of other states who commuted into the city for work. Given the dramatic changes in the remote work landscape, the taxability of this income is being challenged in several court cases and the legal landscape may change. In addition, the tax structures in New York State increased the top income tax rate for New York City’s highest income residents to 10.9 percent. This shift was exacerbated by the implementation of the State and Local Tax cap by the federal government in 2018 which limited the deductibility of local taxes. These changes in recent years, paired with new found mobility, may result in outmigration of New York City’s wealthiest residents.

New York City has set a net-zero carbon target for 2050. Achieving this goal will require significant investments in renewable energy sources to shift the energy supply to clean sources. Simultaneously, there must be investments in building and transportation sectors that lead to more efficient energy usage. This will include building an infrastructure for electric vehicles in the city, and the electrification of the city’s almost one million buildings.

The complete conversation can be found here.