It’s now been fifty years since our nation lost Senator Robert F. Kennedy. He was a leader on so many important issues — from human rights and peace, to hunger and poverty in America. As we approach the 2020 Census and the next round of redistricting of Congress and state legislatures, it is worth reflecting on the role Kennedy played in fair districting. It mattered in Kennedy’s time and it matters today.

Drawing electoral lines for political representation purposes has long given rise to controversy in the United States, from criticism of oddly shaped districts for partisan purposes (often referred to as “gerrymandering”), to drawing lines that favor rural over urban constituencies. While fairness in voting goes to the heart of democratic representation, for decades state legislatures largely were given free rein over mapping decisions without oversight from the judiciary.

For example, in 1946, the United States Supreme Court rejected a challenge to Illinois’s congressional districts after a Northwestern University professor alleged they were malapportioned. In Colegrove v. Green, Justice Felix Frankfurter opined, “Courts ought not to enter this political thicket. The remedy for unfairness in districting is to secure State legislatures that will apportion properly, or to invoke the ample powers of Congress,” 328 U.S.549, 556 (1946).

When the Supreme Court agreed to hear Gray v. Sanders, a constitutional challenge to Georgia’s county-based primary system that favored rural areas, Attorney General Robert F. Kennedy chose it as the one case he would argue before the Court.

It wasn’t until 1962 that the Supreme Court reversed its direction in Baker v. Carr. In the Baker decision, authored by Justice William J. Brennan, the Court found that the Fourteenth Amendment’s Equal Protection Clause warranted judicial review of electoral district line drawing. According to Brennan’s reasoning, each vote cast in an election should be given approximately equal weight, 369 U.S. 186 (1962).

In the early 1960s the Kennedy administration supported judicial intervention to remedy malapportioned districts. When the Supreme Court agreed to hear Gray v. Sanders, a constitutional challenge to Georgia’s county-based primary system that favored rural areas, Attorney General Robert F. Kennedy chose it as the one case he would argue before the Court. 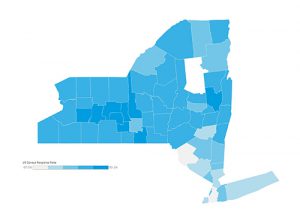 Gray v. Sanders focused on the state’s use of a county-unit vote-counting system for primary elections. Candidates receiving the highest number of votes would receive all of the county’s unit votes. To win, a candidate would have to receive a majority of the county unit votes statewide. Rural counties usually came out ahead even though they comprised only one-third of the state’s population at the time. Plaintiff James O’Hear Sanders, who lived in a largely populated county, argued that the county unit rule gave his vote less weight.

At oral argument in the United States Supreme Court on January 17, 1963, Kennedy was accompanied by several family members, but reportedly had no counsel seated with him and only a handful of talking points. Kennedy went straight to the importance of weighing votes, pointing out, “We used to have, and I repeat used to have, a saying in my City of Boston which was vote early and vote often.” In explaining what was at stake in Gray, he continued, “If you live in one of the small counties in the State of Georgia, all you have to do is vote early and you accomplish the same result.” In short, whether it’s voting twice, or having your one vote worth two votes, the perverse impact on equal representation is the same.

It is significant that the attorney general of the United States chose to make an equal protection case his only argument before the Supreme Court when these cases were in their nascent stages. Later, as New York’s junior senator, Kennedy opposed a constitutional amendment to overturn Reynolds v. Sims, the Supreme Court decision requiring that state legislative districts must be generally equal in population.

In addition to making many districts noncompetitive by drawing lines to favor one political party over another, gerrymandering has been cited as a factor in less bipartisan cooperation and greater gridlock in legislative bodies.

During the 1980s, the Supreme Court took up cases that dealt with racial and partisan gerrymandering. It set standards for Voting Rights Act compliance in Thornburg v. Gingles, 478 U.S. 30 (1986), by creating standards to determine when minority vote dilution occurs. In Davis v. Bandemer, 478 U.S. 109 (1986), the Court opened the door to judicial review of partisan gerrymandering claims, finding them justiciable, but upheld the Indiana districting at issue on the grounds that it was not “sufficiently adverse” to violate the Equal Protection Clause.

Today, the Court is being asked to go further in ensuring equal representation, including by setting a new standard limiting partisan “gerrymandering.” In addition to making many districts noncompetitive by drawing lines to favor one political party over another, gerrymandering has been cited as a factor in less bipartisan cooperation and greater gridlock in legislative bodies, Gil v. Whitford (No.16-1161), Benisek v. Lamone (No. 17-333).

Looking back fifty years after Kennedy’s death, we are left to wonder what might have been different had he lived and been elected president. There are so many “what ifs” that can’t be answered. But we can take a moment to reflect on how Robert F. Kennedy chose to make the fair representation in Gray his fight before the Supreme Court so long ago, how far our nation has come in addressing the matter, and how much further our nation has to go toward achieving the goal.