By The Numbers
The Growing Drug Epidemic in New York

The nation has a serious opioid epidemic. In nearly every state, deaths from drug overdoses or chronic drug use are on the rise. The same is true of New York State. Specifically, using the latest federal data:

According to the Centers for Disease Control and Prevention (CDC), the nation “is in the midst of an unprecedented opioid epidemic.”4 More than 500,000 people have died from drug overdoses since 2000 — nearly ninety-one people a day in the United States.

States are grappling with drug addiction, especially prescription drugs, heroin, and dangerous synthetic drugs, like fentanyl. States, as well as the federal government, have undertaken many initiatives to try to stem the growing tide of drug addiction, including public education campaigns, enhanced electronic drug monitoring programs, and new law enforcement efforts. The epidemic has strained state and local resources, from healthcare facilities to law enforcement.6 Addiction has become such a problem that in 2014 the governor of Vermont dedicated his entire 2014 State of the State address to addressing the state’s heroin epidemic.7 Most recently, the president of the United States convened a commission, led by New Jersey Governor Chris Christie, to address the issue.

This report examines the growing drug epidemic in New York. It will be the first in a series of reports examining the opioid crisis and solutions governments are taking. In future reports, the Rockefeller Institute of Government will examine how well some of those strategies are working and what other steps policymakers may want to take to address the problem.

Using data from the CDC on drug-related deaths, this report examines recent trends to see the overall size and scope of the problem in New York State. This analysis will hopefully lead to more targeted research to help policymakers address the problem.

In response, New York has taken aggressive steps to combat the problem. In 2012, the state enacted a package of laws to better control the supply of prescription drugs by creating a real-time prescription drug monitoring system aimed at, among other things, preventing doctor shopping (a problem highlighted by the attorney general after a series of investigations).9 Then in 2014, the state enacted another series of reforms including new penalties to crack down on illegal drug distribution and increased access to antioverdose kits.10

Just last year, based on a Governor’s Task Force to Combat Heroin, as well as several other Legislative Task Forces, the state enacted a broad set of reforms addressing the epidemic.11 Those efforts included reducing opioid prescriptions from thirty to seven days, eliminating insurance barriers for drug addiction treatment, and increasing the number of treatment beds in New York.12 New York’s recently enacted state budget included an additional $42 million dollars (for a total of $213 million) to fight the heroin epidemic.

Dutchess County had the highest drug-related death rate of any New York county during three of the five years analyzed (2010, 2012, and 2013); and Erie had the highest rate of any county in a single year (31.7 per 100,000 in 2015). To put this in perspective, in 2015, Erie County was ninetieth in the nation in terms of highest drug overdose and chronic drug abuse death rate. The county with the worst death-rate in 2015 is McDowell County, West Virginia, with a death-rate of 141.2 for every 100,000 people. 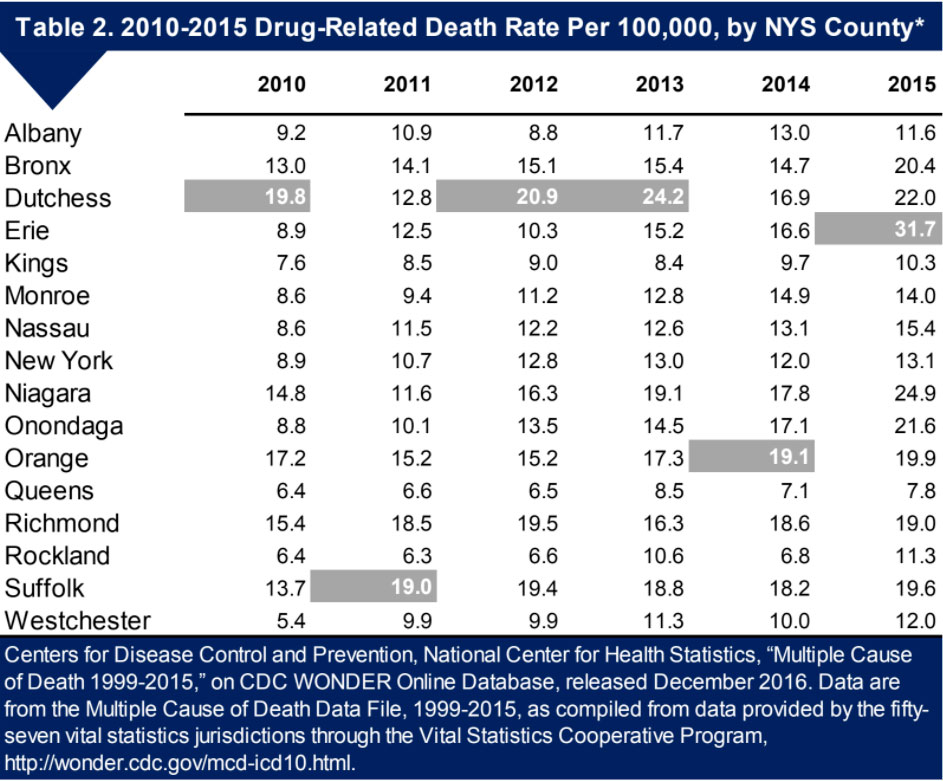 In many cases, the state’s recent drug problem has been an upstate and suburban phenomenon. 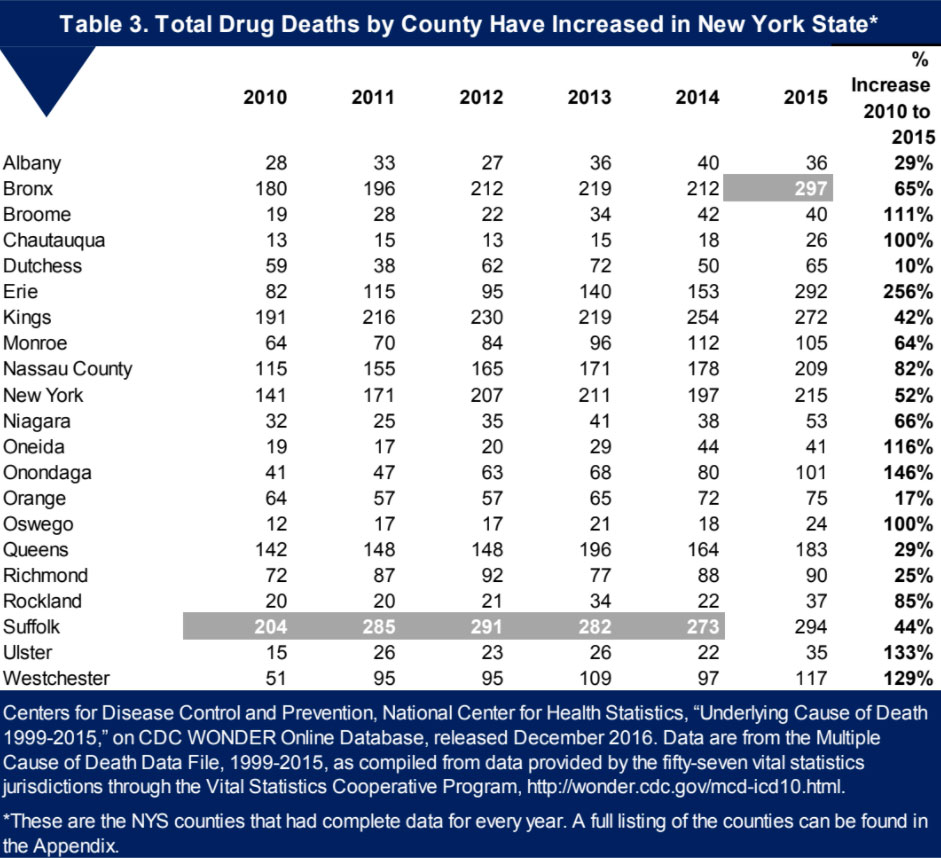 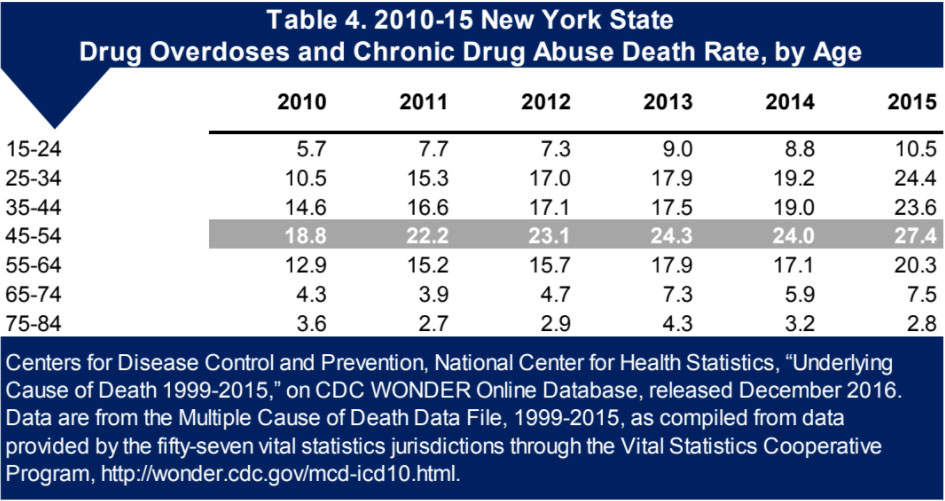 Again, in every category the number of deaths increased from 2010 to 2015.

The drug epidemic continues to worsen across the country. New York has also faced an increased number of drug overdose and chronic drug abuse deaths. In New York, the drug epidemic, with drugs like heroin and fentanyl, has been especially problematic in upstate and suburban counties outside of New York City.

But, in many ways, examining the growth of drug-related deaths is the tip of the iceberg. Future analysis will examine the broader problem of untreated or undertreated drug abuse and access, or the lack thereof, to adequate treatment. Many states, including New York’s state and local governments, have taken dramatic steps to combat the epidemic. This report is intended to establish a baseline to see whether new state and local programs are working to combat the epidemic. Whether those strategies pay off will be the subject of future examination and analysis.