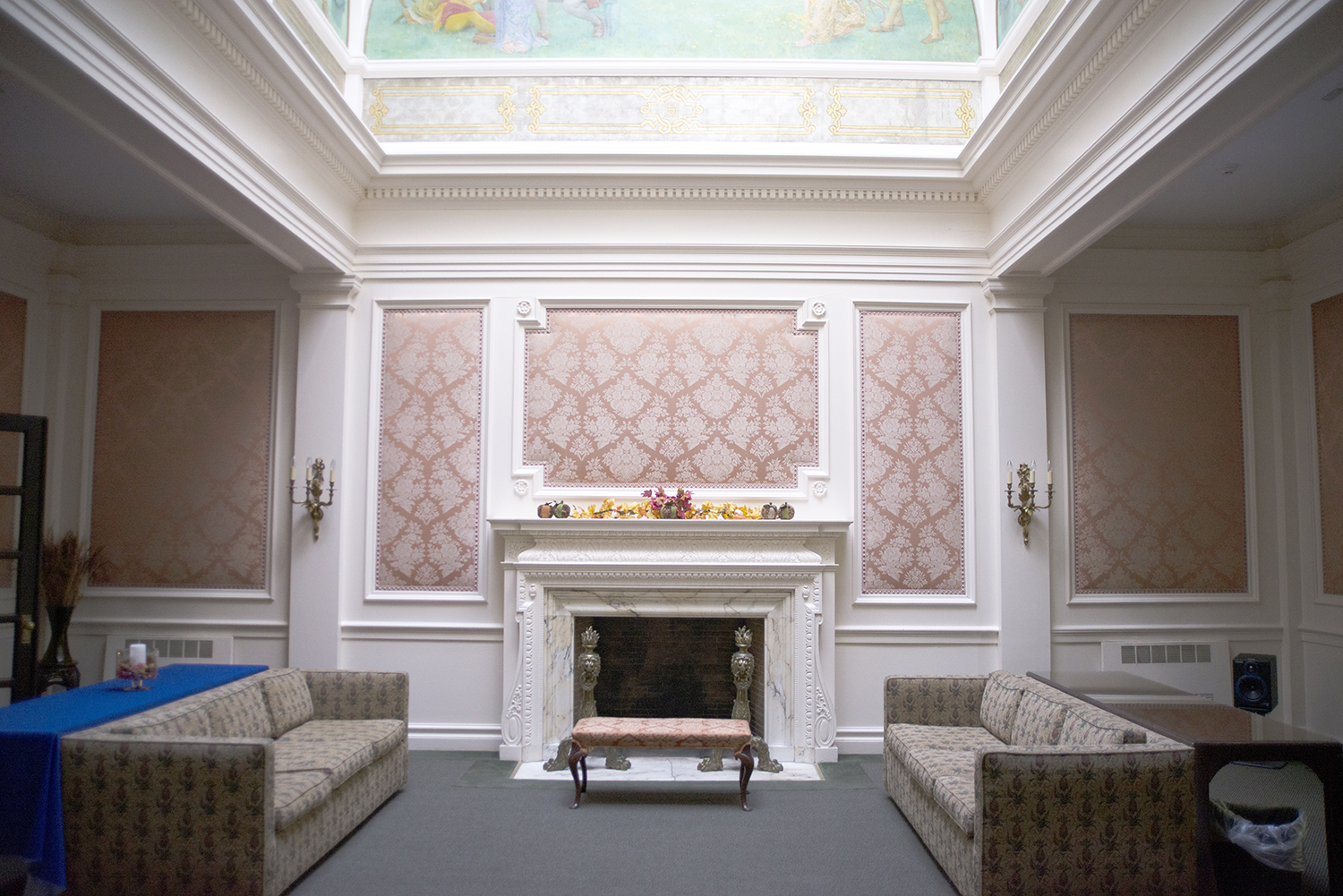 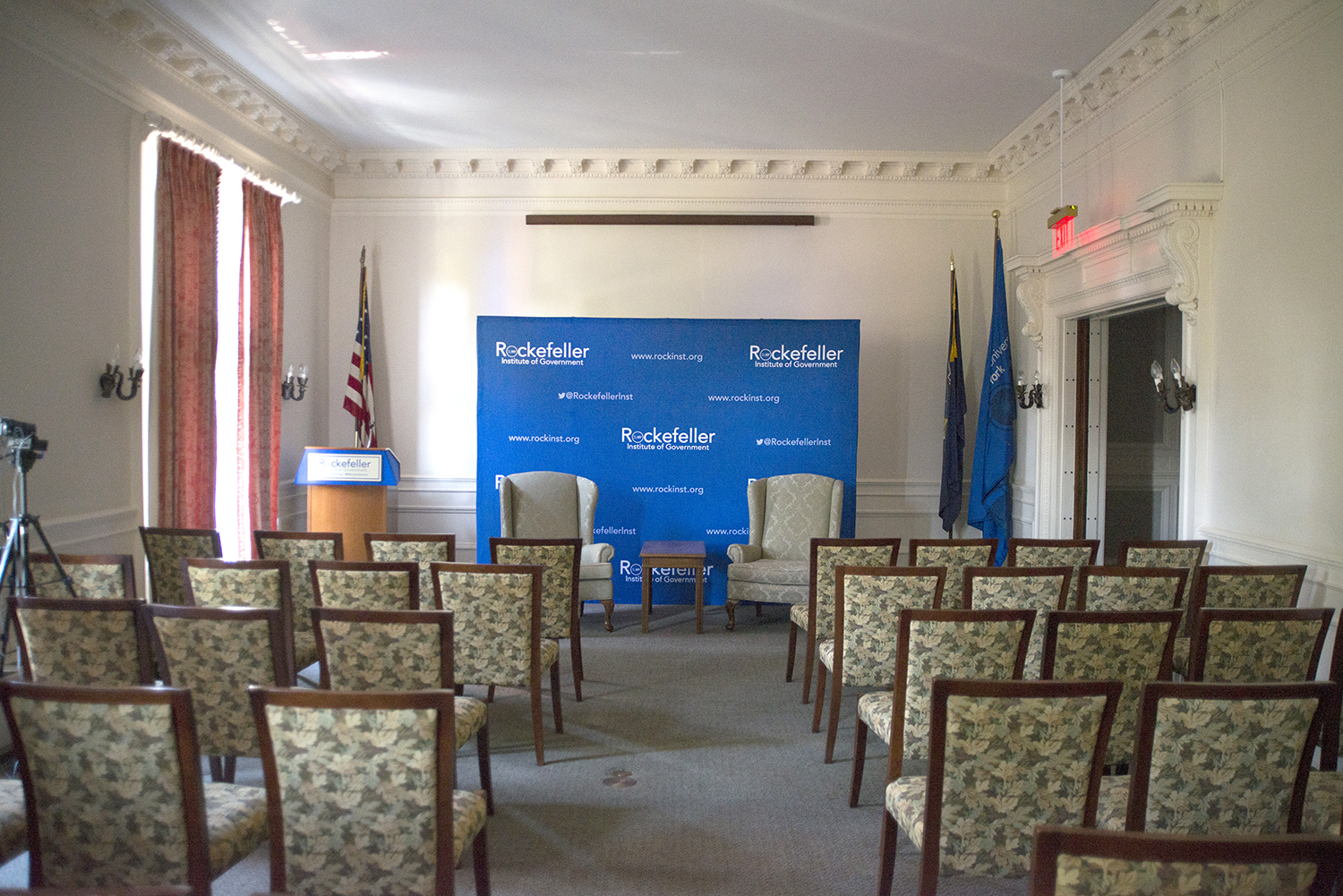 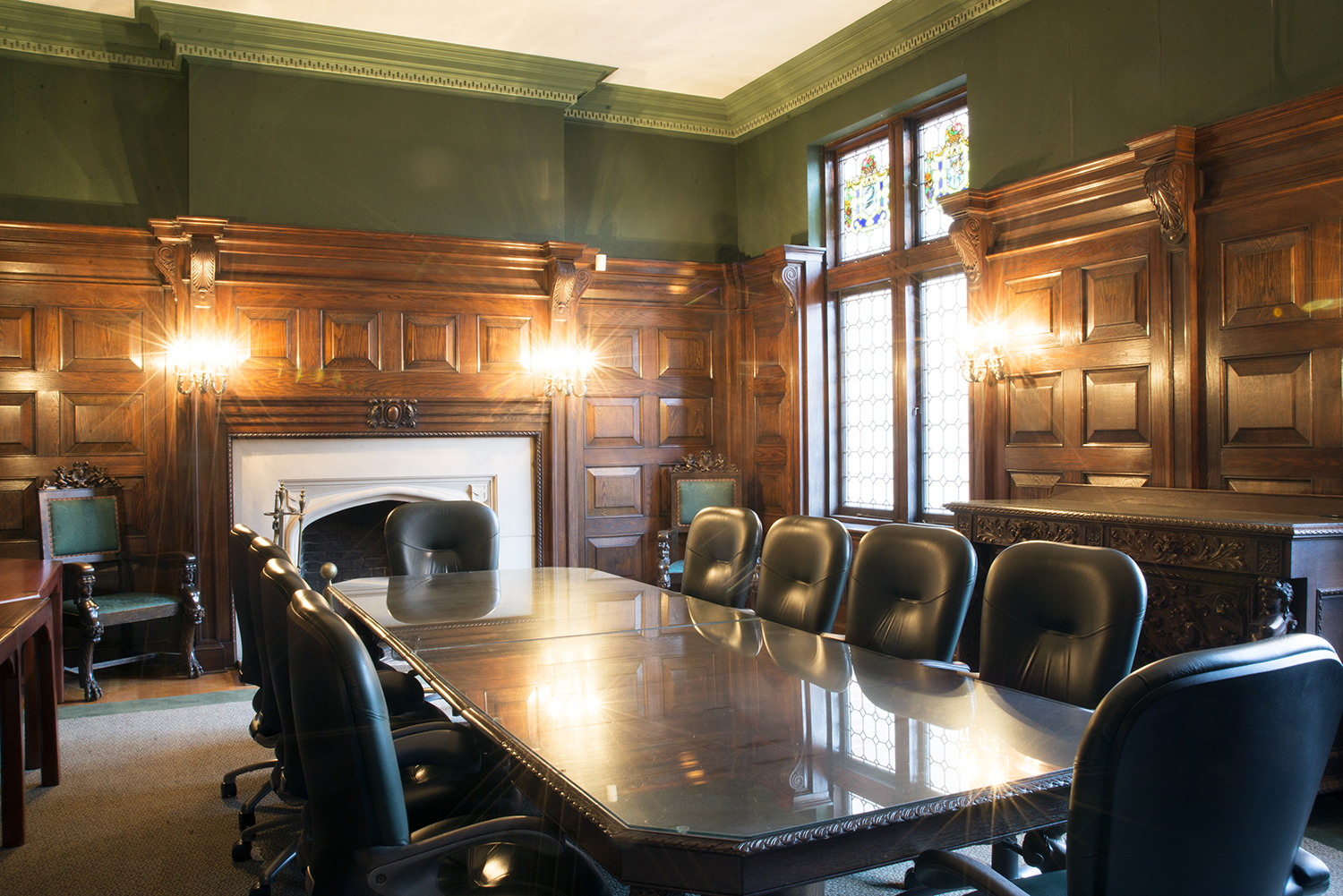 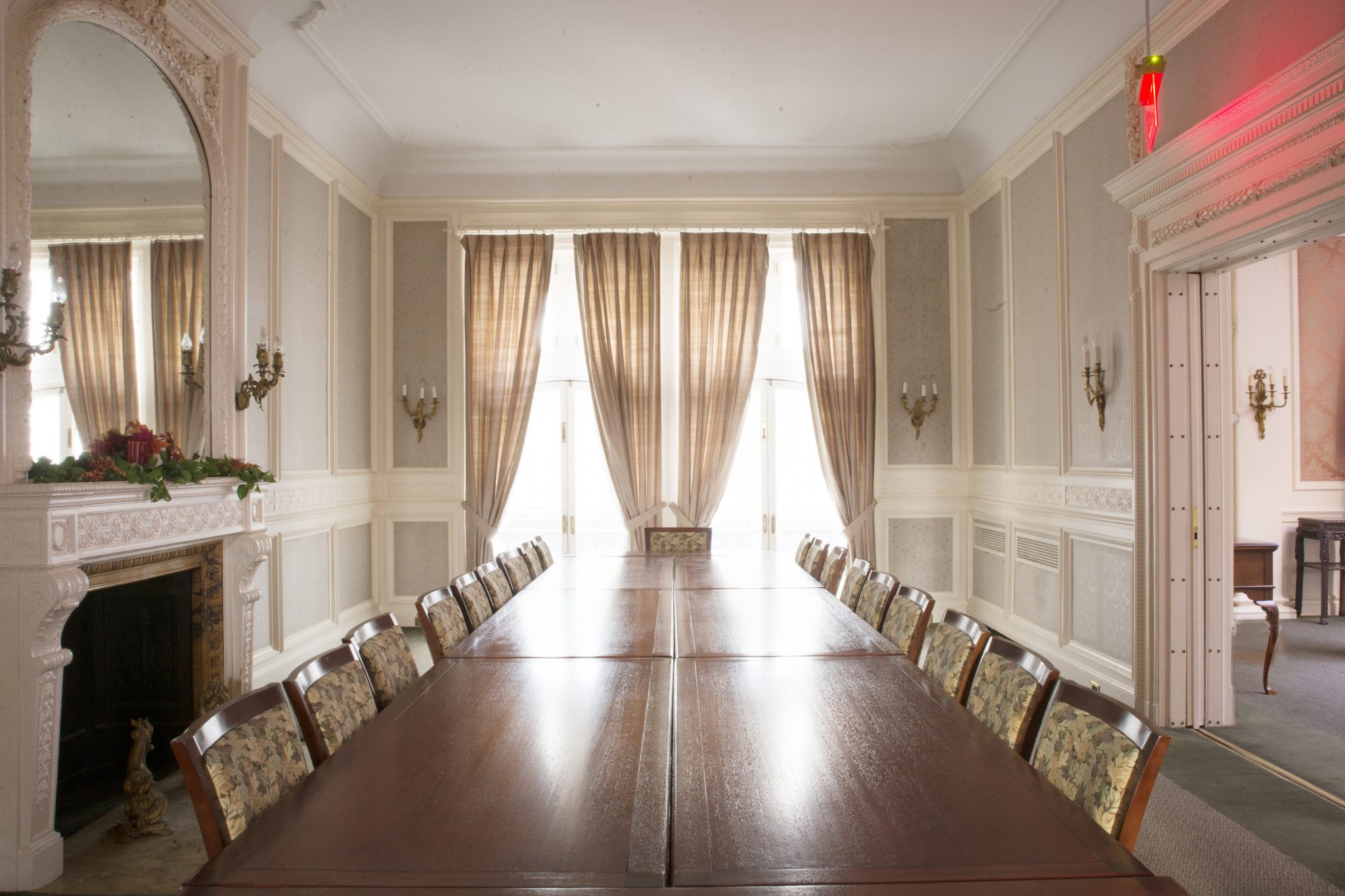 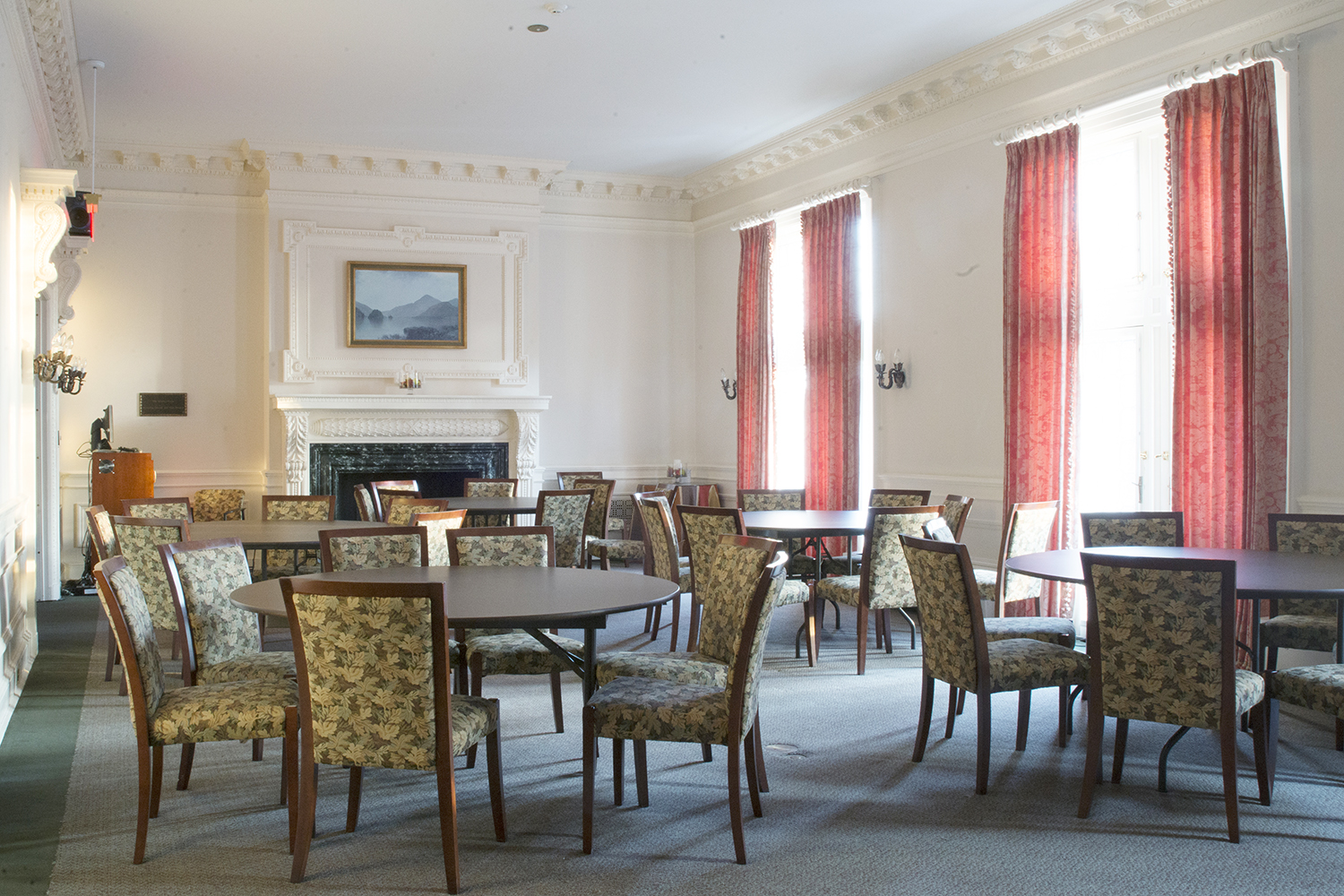 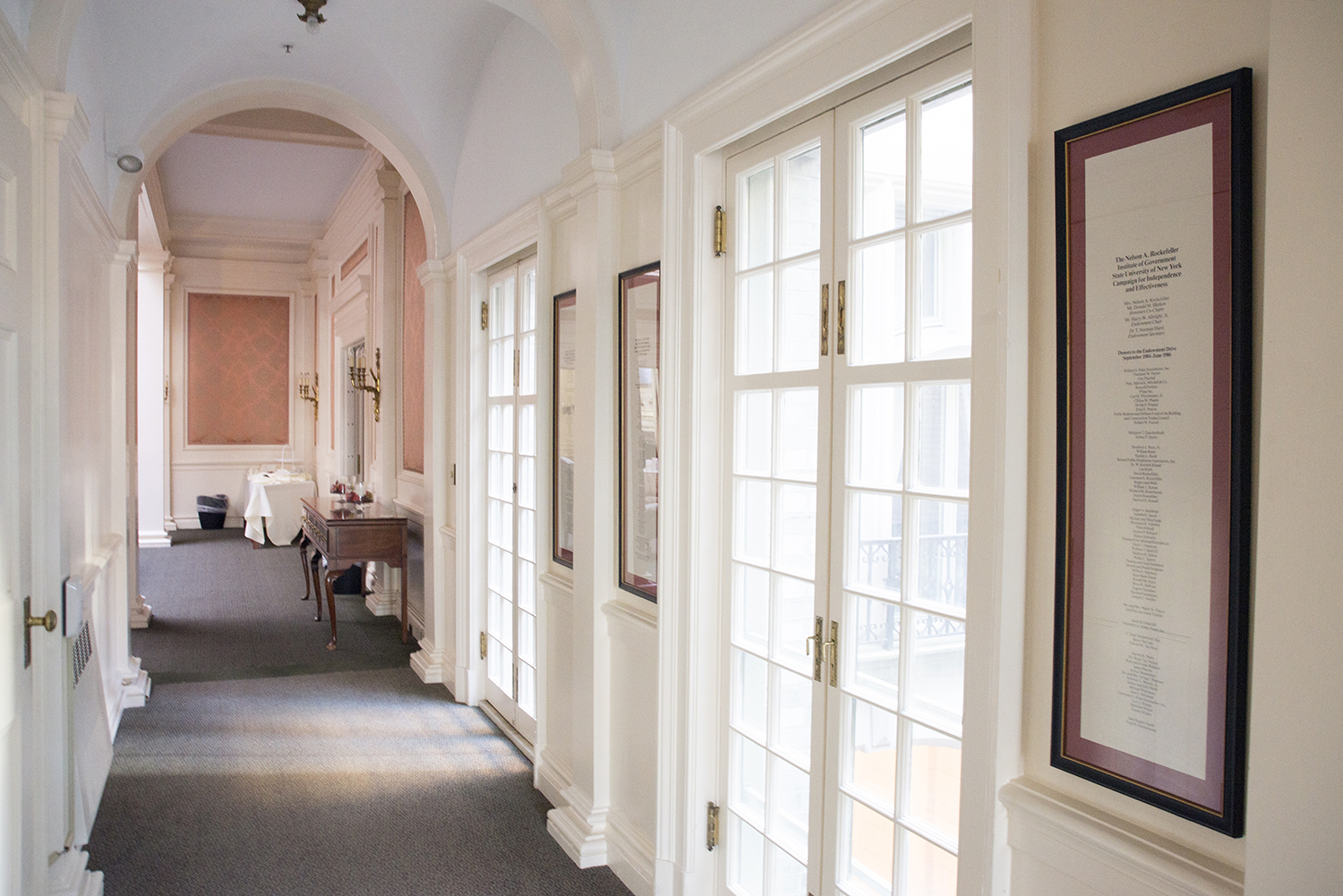 The Rockefeller Institute of Government is housed in three buildings in Albany’s Washington Park Historic District: 411 State Street, 415 State Street, and the Carriage House at 13 Henry Johnson Boulevard. The buildings are appropriately situated between University at Albany’s Nelson A. Rockefeller College of Public Affairs and Policy and the New York State Capitol.

Examples of the finest American residences of their period, the buildings at 411 and 415 State Street and the Carriage House at Henry Johnson Boulevard provide an excellent setting for the programs in public policy and administration of the Nelson A. Rockefeller Institute of Government. Renovated with integrity, the three buildings together will endure as a part of the state’s historic heritage.

This five-story Dutch Renaissance Revival building was constructed in 1900 as residence for Charles Manning Van Heusen and his wife Ada Olive (née Proctor). A prominent Albany businessman, Van Heusen was a close friend of President Theodore Roosevelt, whose White House china he supplied. Van Heusen was also responsible for the standardization of the design of the Great Seal of the United States.

The Van Heusen marriage dissolved before Charles and Ada could move in to 411 State Street. The home was then purchased by Anthony N. Brady, who completed its interior decoration, including commissioning the four wall murals in the Music Room. The building changed hands several times over the decades, undergoing structural changes as it was converted to apartments.

In 1965, it became the headquarters of the Research Foundation of the State University of New York. For 20 years the building served as the Foundation’s corporate headquarters; it also housed such University offices as the Atmospheric Sciences Research Center, the SUNY Press, and the Sea Grant Institute —academic enterprises closely tied to the activities and mission of the Foundation. Even as the building grew worn, it remained a distinguished and elegant symbol. It linked the new State University system both with the social and political heritage of historic Albany and with the progressive, energetic state government whose role was so influential in the development of SUNY during the Rockefeller years.

Restoration of 411 State Street was completed under the supervision of architect John I. Mesick of Mendel, Mesick, Cohen and Waite in Albany. In honor of the then-Chancellor’s efforts to acquire and renovate the building, it has been named the Clifton and Dolores Wharton Research Center. The building’s 23 rooms are a showcase of architectural styles.

On the ground floor, the reception area has an Elizabethan ceiling and a Jacobean fireplace, with carved staircase winding upward. On the second floor, which is used for Institute conferences and other university-wide activities and seminars, a Georgian ballroom displays leaded windows of primarily Flemish influence. The parlor is done in the manner of Louis XVI, and the paneled dining room is Jacobean.

The Music Room is thought by many to be the most beautiful room in Albany. Dominated by English Georgian features, it is highlighted by four lunette wall murals executed in 1906 by the local artist Will H. Low. The murals depict allegories entitled Time of Henri II (east wall), Garden Fete (west wall), Chateau d’Anet (north wall), and Garden of Diana (south wall).

Several pieces of original furnishings remain in the Institute, including a marble statue called Spinario (Boy Removing a Thorn), which is a copy of a bronze work in the Palazza dei Conservatori in Rome.