Veterans at Work in the State of New York 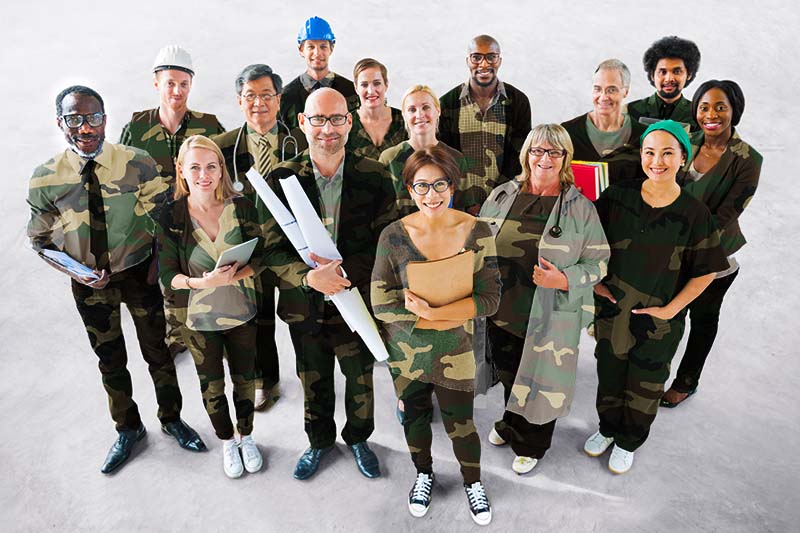 By Laura Schultz and Leigh Wedenoja

In honor of Veterans’ Day and National Veterans and Military Families Month, we explore the role veterans play in New York State’s workforce. New York is home to over 675,000 veterans, making it the sixth largest state by veteran population. Approximately 4.4 percent of New Yorkers over the age of 18 are veterans. Using five years of data from the US Census Bureau’s American Community Survey harmonized by IPUMS, we present data on where New York’s veterans live, what the population looks like, and how they participate in the New York workforce.

Where Do Veterans Live In New York?

The counties in New York home to the most veterans are Suffolk, Erie, Queens, Nassau, and Kings. Together these five counties are home to a third of the state’s veteran population. Suffolk and Erie counties both have a greater concentration of veterans than the state average, 5.0 percent and 6.9 percent, respectively. Over a third (35.8 percent) of veterans live in New York City or Long Island with the rest residing upstate. The share of the New York City/Long Island population with veteran status is only 2.7 percent compared to 6.6 percent in the state’s other regions.

When adjusting for population the counties with the highest concentration of veterans are Jefferson (13.2 percent), Steuben (10.0 percent), Oswego (9.5 percent), Chemung (9.5 percent), and Schuyler (9.4 percent). The share of the population with military service is twice the state rate in all five counties and higher than the national average (7.1 percent). Jefferson County is home to Fort Drum, a US Army base.

How do Veterans Participate in the Labor Force?

The average age of retirement from military service (excluding reserves) is 45.2 for officers and 41.0 for enlisted. Many veterans are still in the window of working age at the time they separate from military service. In this section, we explore how New York’s veterans engage in the state’s workforce.

Roughly three-quarters of New York’s veterans of prime working age (18-64) are participating in the labor force (Table 2), which is slightly lower than nonveterans. There has been an average 4.5 percentage point gap between male veteran and male nonveteran labor force participation.

Even with their lower levels of labor force participation, veterans have been less likely to be unemployed (Table 3) in four of the past five years. This trend continued during the pandemic, when veterans reported unemployment rates of 6.6 percent, 1.7 percentage points lower than their nonveteran peers.

Veterans are far more likely to have full-time employment (Table 4). The difference between male veterans and nonveteran men averaged 5.5 percentage points across all five years of data. The average is higher when comparing veterans against the entire workforce, but this is more likely explained by gender differences. Women are less likely to work 35 hours a week. They represent 48.6 percent of the total workforce, but only 43.4 percent of those employed full time.

Overall, veterans earn an average full-time annual wage equivalent to their nonveteran peers (Table 5). However, when selecting only men, we see that veterans earn approximately 7 percent less annually than men without military service. These differences can be explained by differences in education levels and employment choices.

Veterans are far more likely to pursue employment in public service than nonveterans. 27.4 percent of veterans in New York worked for the federal, state, or local government compared with 15.75 percent of nonveterans. The public sector often actively recruits veterans to continue in the civilian service. Nearly a third of the federal government workforce is veterans. Over the past decade, the federal government has actively recruited veterans through the establishment of the Veterans Employment Initiative. New York State also recruits veterans into the civil service through the offering of additional civil service credits and the 55-c program, which designates 500 positions to be filled by veterans with disabilities. Eligible veterans who meet the minimum qualifications do not need to take a civil service exam to be considered for state employment.

Roughly 40 percent of New York’s veterans find employment in one of ten industries. The most common industries of employment are construction (8.1 percent); justice, public order, and safety (7.1 percent); and hospitals (5.4 percent). These veterans are finding positions that depend on the experience and training they received over the course of military service.

Veterans pursue a wide range of occupations when entering the workforce. The 25 most common occupations represent nearly 40 percent of veteran employment. The most common job in New York is truck driver, followed closely by managers. Nearly 5 percent enter law enforcement as a police officer, sheriff, or corrections officer.

New York has a sizable veteran population and ranks sixth nationally in the number of veterans. Many veterans leave military service in their 30s and 40s meaning they have an opportunity for career transition. They bring technical and leadership skills to their private and public sector jobs. These veterans play important roles in the state’s workforce—working in fields such as law enforcement, healthcare, education, and national security—and are more likely to enter public service.

Over the coming weeks we will be exploring the landscape of programs available to veterans and New York State’s policy priorities moving forward as leaders continue to create opportunities for those who have served. Stay tuned to the Institute's Policy Outsider podcast for more.