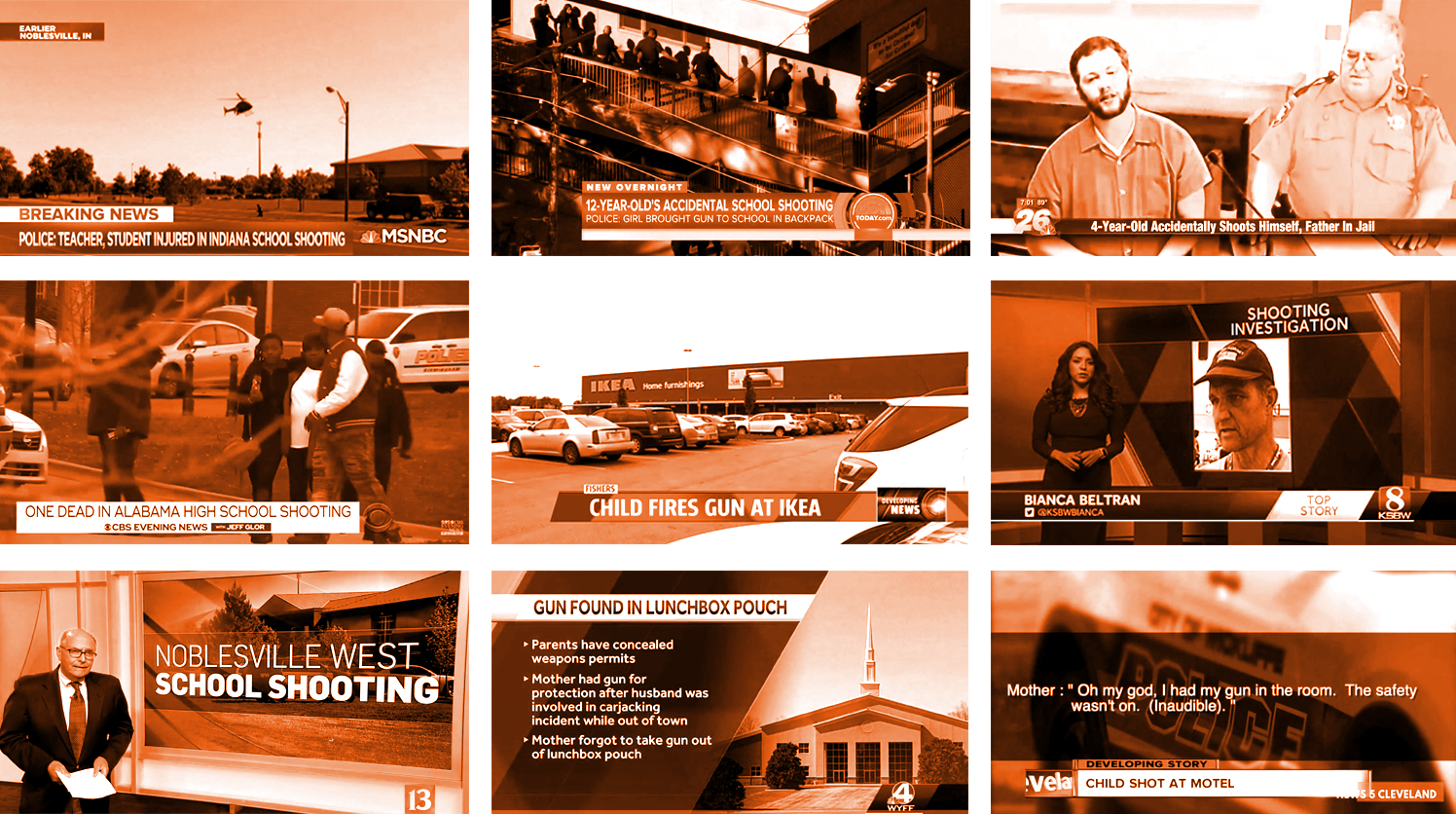 Criminal charges are rarely filed against firearm owners in the wake of “accidents.” Why are we so reluctant to hold irresponsible gun owners legally accountable, even when children gain access to negligently stored firearms?

This year, American news headlines have been abuzz with stories concerning mass shootings in schools and workplaces. It is easy to understand why these tragic events get so much attention — they are terrifying, and we can easily empathize with those caught in the crossfire. Sometimes these murderous acts might have been prevented by legislation like “Red Flag” laws targeting individuals posing a danger to themselves and others (like Parkland High School); other times, it seems that there’s really nothing that could be done.

But firearm accidents — far more common, potentially deadly, and often highly preventable — make news headlines far less often. One egregious example occurred on June 25, 2018, in Fishers, Indiana, when Francis Wright, a sixty-two-year-old gun owner, pocket-carried his handgun (a .380 caliber semiautomatic Kel-Tek P-3AT) past an Ikea store’s “no weapons” sign, sat down on a couch inside, and crossed his legs. At some point, the firearm fell out of Wright’s shallow pocket and lodged in the couch cushions. When he got up, he did not know that he had left it behind. Unfortunately, others soon found Wright’s handgun; two six-year-old boys located the firearm, and one accidentally fired it into the couch. Subsequently, on June 28th, the Hamilton County prosecutor charged Wright with criminal recklessness (a Level 6 felony, the most minor felony under Indiana law), on the grounds that he recklessly neglected his firearm in the store, creating a substantial risk of bodily injury to another person.

Wright’s irresponsibility is obvious; it didn’t take long before online sites were animated with comments lamenting Wright’s conduct, and dissing the irresponsible practice of pocket carry. But others were skeptical that Wright’s conduct was reckless enough to warrant criminal charges. This question, of course, will be decided by the judge or jury who hears Wright’s case.

The more compelling question, however, is how we can best discourage such conduct in the future. Criminal charges are rarely filed against firearm owners in the wake of “accidents.” Why are we so reluctant to hold irresponsible gun owners legally accountable, even when children gain access to negligently stored firearms?

Holding irresponsible gun owners accountable, then, is the type of problem for which it is difficult to find a holistic solution — even the institutions that traditionally solve such social problems have proved cumbersome at best.

Relying on civil or criminal law to hold irresponsible gun owners accountable writ large is often dicey at best. Though an injured victim could sue a negligent or reckless gun owner in civil court, under tort law, this route leads to expensive attorneys’ fees, and it is difficult to convince an attorney to take such a case on a contingency fee basis unless there are significant injuries or fatalities that command large settlements or monetary awards. And why should an irresponsible owner’s accountability depend on the whims of fate — whether or not there is a body count? It is equally unlikely that a business would sue an irresponsible owner directly in civil court, for tort claims such as trespass to chattels or conversion (for property damage) or negligence. Insurance would likely cover most damage claims, and bringing suit is prohibitively expensive for even a large corporation like Ikea, given that such cases are lengthy and expensive, and there is very little chance of recovering a large verdict against the average citizen who has handled a firearm irresponsibly. As for whether criminal charges are a viable solution, irresponsibility might not fit the legal definition of criminal negligence or recklessness, and prosecutors are frequently deterred from filing charges by political caution and a lack of fiscal resources and time.

Holding irresponsible gun owners accountable, then, is the type of problem for which it is difficult to find a holistic solution — even the institutions that traditionally solve such social problems have proved cumbersome at best. Perhaps the next steps are to address the problem piecemeal, beginning with baby steps: using child access prevention (CAP) laws to hold adults accountable when a minor gains access to a negligently stored firearm and giving private businesses a better tool for keeping firearms out if they wish.

Most states have child access prevention laws enacted to deter firearm access to minors. A few states have very strong CAP laws, under which adults can be held criminally liable when a child may, or is likely to, get access to a negligently stored firearm (even one that is unloaded). Other states require that a child actually gain access before charges can be brought, or mandate that the child’s access result in death or serious bodily injury. Still other states have very weak laws that simply prohibit parents or guardians from recklessly, knowingly, or intentionally providing a gun to a minor.

Weak CAP laws are bad public policy for several reasons. The law has a strong communicative function; criminalizing certain conduct like negligent firearms storage and use sends the message that this irresponsible conduct will not be tolerated, and that the Second Amendment does not give firearm owners the right to store firearms in ways that risk serious bodily harm and injury to others.

Indiana’s CAP law, for example, does not hold parents or guardians liable for negligently providing a gun to a minor. Rather, under Indiana Code § 35-47-10-7, a parent or guardian commits “Dangerous Control of a Child” (a Level 5 felony) when they knowingly, intentionally, or recklessly permit a child to possess a firearm knowing that there is a substantial risk that the child will use the firearm to commit a felony and fail to make reasonable efforts to prevent that child from doing so. Parents and guardians can also be held liable for knowingly, intentionally, or recklessly providing a firearm to a child whom they know has been convicted of a violent crime or adjudicated as a juvenile for such an offense. If a parent or legal guardian has a prior conviction for Dangerous Control of a Child, then another violation is a Level 4 felony. This means that it is overwhelmingly likely that parents of minors who gain access to firearms with horrific results — like the thirteen-year-old boy responsible for the Noblesville Middle School shooting on May 25, 2018 — will not be held liable for their child’s conduct.

Weak CAP laws are bad public policy for several reasons. The law has a strong communicative function; criminalizing certain conduct like negligent firearms storage and use sends the message that this irresponsible conduct will not be tolerated, and that the Second Amendment does not give firearm owners the right to store firearms in ways that risk serious bodily harm and injury to others. Such laws are also supported by most members of the National Rifle Association (NRA). Empirical research on CAP laws has produced equivocal results. Many studies have found that the presence of state CAP laws are associated with statistically significant decreases in firearm injuries and deaths.

John Lott and others have reached different conclusions; Lott, for instance, reported that safe storage laws produced no significant change in accidental deaths or suicides and raised crime rates, arguing that the households most likely to obey the laws had the lowest accidental death risks to begin with (Lott 2001). Nonetheless, existing research strongly suggests that passing strong CAP laws could help encourage gun owners to safely store guns, and otherwise work to prevent harms due to irresponsible conduct. 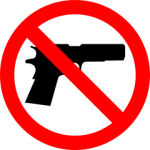 Another route aside from enacting CAP laws is to give businesses who wish to exclude firearms from their premises a more efficacious method. Most gun owners know that the efficacy of the traditional “no firearms” sign (at right) depends on state law; several sites, including handgunlaw.us, report on whether such signs have “force of law.” Usually, individuals who are carrying must be approached and asked to leave or return the weapon to their vehicle. Combining this “no firearms” icon with language denying entry to those with firearms (excepting law enforcement) and a citation to the state’s criminal trespass law might be effective if that law allows a visible sign to effectuate denial of entry. Ikea, and other businesses, take note: Indiana’s criminal trespass law (Indiana Code § 35-43-2-2) states that denial of entry can be accomplished through “posting or exhibiting a notice at the main entrance in a manner that is either prescribed by law or likely to come to the attention of the public.”

Ultimately, individual vigilance and care is the best way to prevent firearm injuries or fatalities from negligent or reckless firearm storage or use. State CAP laws and other strategies can still be useful assets, encouraging those who own and have access to firearms to exercise caution, and creating a culture of responsibility where firearm safety (and justice following critical lapses) is not only valued, but seen to be valued.

Jody L. Madeira is a professor of law and Louis F. Niezer Faculty Fellow at Maurer School of Law at Indiana University. She is also the codirector of the Center for Law, Society & Culture, and a research associate for the Capital Punishment Research Initiative at University at Albany’s School of Criminal Justice.