When Misinformation Spirals Out of Control: The Case of a “Rigged” Constitutional Convention Process in New York State

In New York State, a recent example of how false information can quickly go viral over social media, like Facebook, has been over the upcoming vote to decide whether to convene a constitutional convention (ConCon). 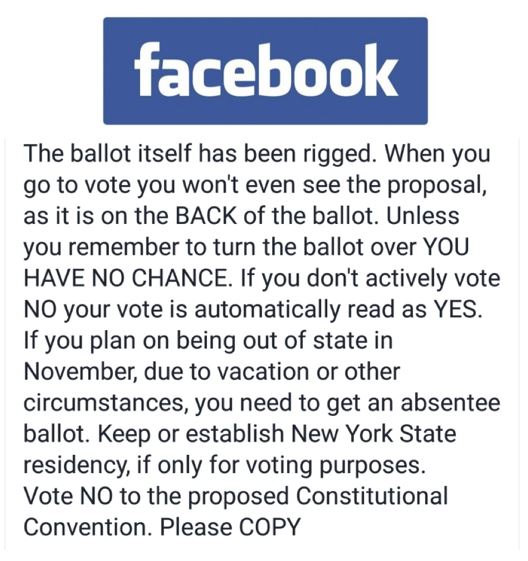 Though there are variations of the post, the gist is the same — the proposal for a constitutional convention has been placed on the back of the ballot to purposely make it hard to find and ballots that are left blank on the question of convening a ConCon will automatically be counted as votes in favor of a constitutional convention. The implication is that the system is rigged to force a constitutional convention to be convened, even if that is not the will of the people. Based on the high number of calls and emails that the Rockefeller Institute has received in the last few weeks from concerned citizens, Facebook posts like this have been shared widely. Unfortunately, the information that is being circulated is mostly false.

While it is likely that the proposal for a constitutional convention may appear on the back of the ballot, this is not necessarily a done deal. Evan Davis, manager of the Committee for a Constitutional Convention, has sued the New York State Board of Elections to obtain a court order requiring that the question of whether to convene a constitutional convention appear on the front of the ballot. Though his initial suit was dismissed, Davis does plan to appeal the court’s decision to the New York Court of Appeals.

What is not in doubt, however, is how blank ballots are counted. Contrary to what has been circulated, failing to vote on this measure does not default to being considered a vote in favor of holding a ConCon. How to count blank votes is very clearly outlined in New York State Election Law § 9–112:

If the voter marks more names than there are persons to be elected or nominated for an office, or elected to a party position, or makes a mark in a place or manner not herein provided for, or if for any reason it is impossible to determine the voter’s choice of a candidate or candidates for an office or party position or his or her vote upon a ballot proposal, his or her vote shall not be counted for such office or position or upon the ballot proposal, but shall be returned as a blank vote thereon. (Emphasis added)

If a voter leaves the question of convening a ConCon blank on their ballot, whether because they miss the proposal or by design, it will simply be counted as a blank vote. End of story. In other words, only those individuals who voted “yes” or “no” on whether to hold a ConCon are counted.

Whether people decide to vote for or against a constitutional convention in New York or ignore the question entirely is up to them. But they should make that decision with accurate information. Misinformation that goes viral muddies the truth and confuses voters. But the bigger danger is that viral misinformation may undermine faith in our electoral system.