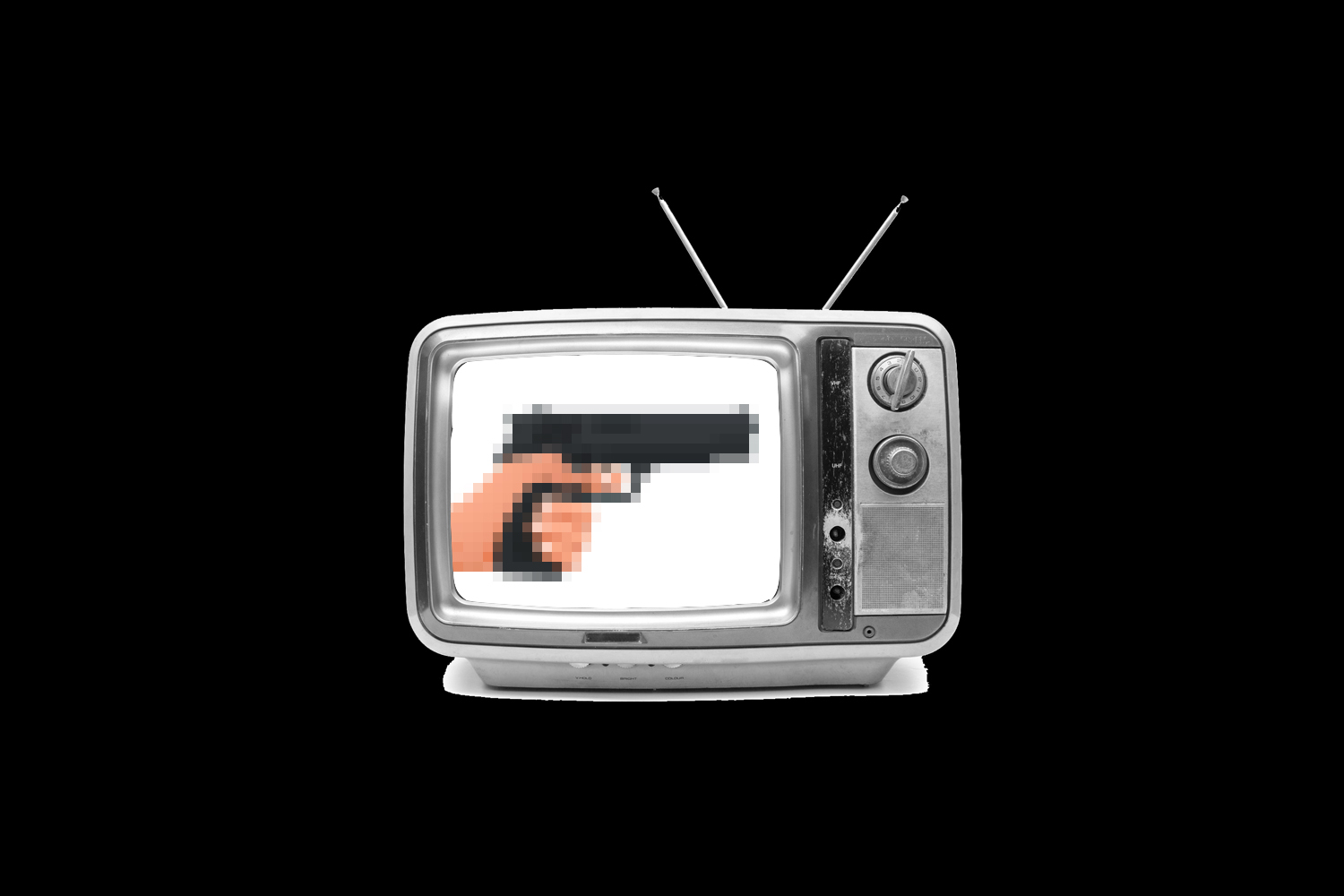 In a recently released video manifesto, the perpetrator of the February 14, 2018, shooting at Marjory Stoneman Douglas High School in Parkland, FL — whose name I will not mention here — discussed the recognition he would receive after committing the attack just a few short hours later. His vision became a reality as, after word of the shooting broke and he had been identified, his name and picture were plastered across television screens and newspaper headlines, making him an instant celebrity. Within weeks, the perpetrator’s brother had expressed a desire to start a fan club to capitalize on the fame and attention and people across the country, especially teenage girls, began sending letters of support and adoration to his lawyer.  Yet four months later, few people can remember the name of one of the people he killed, let alone all seventeen.

School and mass shootings have become what Douglas Kellner calls a “media spectacle.”[1] Following the mold set by the Columbine shooting back in 1999, when word of another shooting breaks, the media break in with live, uninterrupted coverage from the scene.  Images of police swarming the respective buildings and people being evacuated are looped in between commentary from anchors, updates from reporters at the scene, and interviews with traumatized individuals who just experienced something that has forever changed them.  Once the perpetrator is identified, their name and photo are splashed across television screens and newspaper headlines. Depending on the lethality of the event, this attention can last for days or, in the most extreme cases, weeks. One study estimates that more than 7,900 stories were published online (not counting newspaper stories and television broadcasts) about the Parkland shooting in just the first two weeks after the attack.[2] Other high profile — and highly lethal — shootings (including Columbine, Virginia Tech, and Sandy Hook) have also generated intense and excessive media coverage.[3]

In just the first thirty days after Parkland, threats and school-violence incidents increased 300 percent over the prior 108 days of the academic year, with the majority coming in the first twelve days when media coverage was also the highest.

This coverage format, however, is problematic, particularly in respect to how the perpetrator is covered. First, by prioritizing the perpetrator in the coverage over the victims, survivors, and heroes, the media are, in essence, giving them exactly what they want — fame and notoriety. It is effectively rewarding them for killing people — and the perpetrators are cognizant of this. Following the May 18, 2018, shooting at Santa Fe High School in Santa Fe, TX, for example, the perpetrator told police that he purposefully spared certain students that he liked so that they would tell his story to the media.[4] Others before him have echoed similar sentiments.

Second, and equally as important, is consideration of the potential for copycat attacks in the wake of one of these events. Researchers recently have documented the potential for contagion and copycat attacks, and the Parkland shooting provides real-world evidence of this issue.[5] The Educators School Safety Network, a nonprofit organization, tracked school-based incidents and threats following the shooting.[6] Their findings indicated that in just the first thirty days after Parkland, threats and school-violence incidents increased 300 percent over the prior 108 days of the academic year, with the majority coming in the first twelve days when media coverage was also the highest. Thus, continuing to highlight the shooters of these events not only rewards them for their actions, it also signals to other like-minded individuals that if they engage in similar actions (e.g., a school or mass shooting), they also will receive national attention from the media.

In order to counterbalance both of these potential issues, a more responsible form of media reporting is needed — one that denies the perpetrators the very rewards they are seeking and prioritizes the victims, survivors, and heroes in the coverage. One of the most promising avenues to achieve this end is the No Notoriety campaign, started by Tom and Caren Teves after their son, Alex, was murdered in the Aurora movie theater shooting in 2012. The No Notoriety protocol calls for a limited use of the perpetrator’s name and image in the coverage, except in instances where the individual has yet to be apprehended and such information is vital to their capture. It also advocates for the promotion of data and analysis from relevant experts, as well as a refusal to publish manifestos — like that of the Parkland shooter — or other similar materials.

A more responsible form of media reporting is needed — one that denies the perpetrators the very rewards they are seeking and prioritizes the victims, survivors, and heroes in the coverage.

The protocols established by the No Notoriety campaign are not without their own supporting evidence. In fact, the recommendations offered in the protocol mirror those of the World Health Organization (WHO) related to the media reporting of suicide. Upon determining that suicide was a contagious behavior, the WHO issued a challenge to the media to change their reporting practices to help reduce the increase in people taking their own lives. Among these recommendations, made in conjunction with the International Association for Suicide Prevention, are (1) avoiding sensational or normalizing language to describe suicide; (2) carefully crafting headlines that avoid using the term “suicide” or any specific reference to its method; (3) avoiding prominent placement such as on the front page or in the first minutes of a broadcast; (4) limiting unnecessary or excessive repetition of stories; and (5) exhibiting caution in the photographs or video coverage shared.[7]

When these protocols have been adhered to, the contagion of suicide has been found to be attenuated. When it has not, however, such as in the instances of celebrity suicides, the consequences have been deadly. The reporting of Robin Williams’ 2014 suicide, for example, was found to be correlated with a 10 percent increase in suicides over the following four months.[8] Given the extensive coverage of the recent suicides of Anthony Bourdain and Kate Spade, it is possible that the nation will experience a similar increase in self-inflicted deaths. Thus, it becomes all the more important to report on these events — and, similarly, mass shootings that exhibit the same contagion or copycat potential — in accordance with these recommendations.

The majority of news consumers surveyed indicated that they still would watch or read coverage about mass shootings if the media were to withhold the perpetrators’ names and pictures.

While the public has a right to know and the media have a responsibility to inform them, they must be mindful of the full effect of the manner in which they are covering mass shootings. As Adam Lankford has pointed out, the media are giving mass shooters free advertising (and millions of dollars, at that).[10] By engaging in more responsible reporting through the limiting of the use of the perpetrators’ names and images — recommendations that do not infringe upon the First Amendment protections of freedom of the press, but instead address a clearly documented public health concern — the media actually may be able to save lives and help to achieve the long-standing goal of reducing mass shootings in the United States.

Though a blanketed adoption of No Notoriety or a similar protocol by the mass media has yet to happen, we are already seeing promise from reporters like CNN’s Anderson Cooper and news organizations like Denver’s 9News, who limit their use of the perpetrators’ names and images or avoid use completely. Both the International Association of Chiefs of Police (IACP) and the Society for Journalism Professionals (Florida chapter) (SJP), among other organizations, also endorse the No Notoriety protocol. Still, the question remains as to why — when there is a clearly documented impact of the way in which these events currently are covered, a change in the reporting could have immeasurable benefits both for news organizations and society at large, and news consumers will still follow the coverage if a new protocol is adopted — are the media so reluctant to shift their practices?  As a society, we must demand a change and hold the media accountable for their reporting of these events. Lives literally could be — and are — depending on it.

[9] Jaclyn Schildkraut and Ryan McHale, “No name, no photo, No Notoriety: Assessing news consumers’ support for a change in the reporting of mass shootings,” manuscript submitted for publication, 2018 (copy on file with the authors)

Jaclyn Schildkraut is an assistant professor of public justice at SUNY Oswego and a national expert on mass shootings.